Click on the words above “Save our Tomales Bay – Part 24 Whence cometh the detritus” to see this entire post.

Over the past few years of working with local oyster farmers to improve their processes in order to leave less trash in our local waters, I’ve heard them say more than once “When we go out on our yearly trash pickups, we always find more non-oyster trash than oyster farm trash.”

Let’s look at this statement in more detail.

Look at the image below of a grow-out bag nearly obscured by pickleweed in less than 3 weeks at the mouth of Walker Creek. 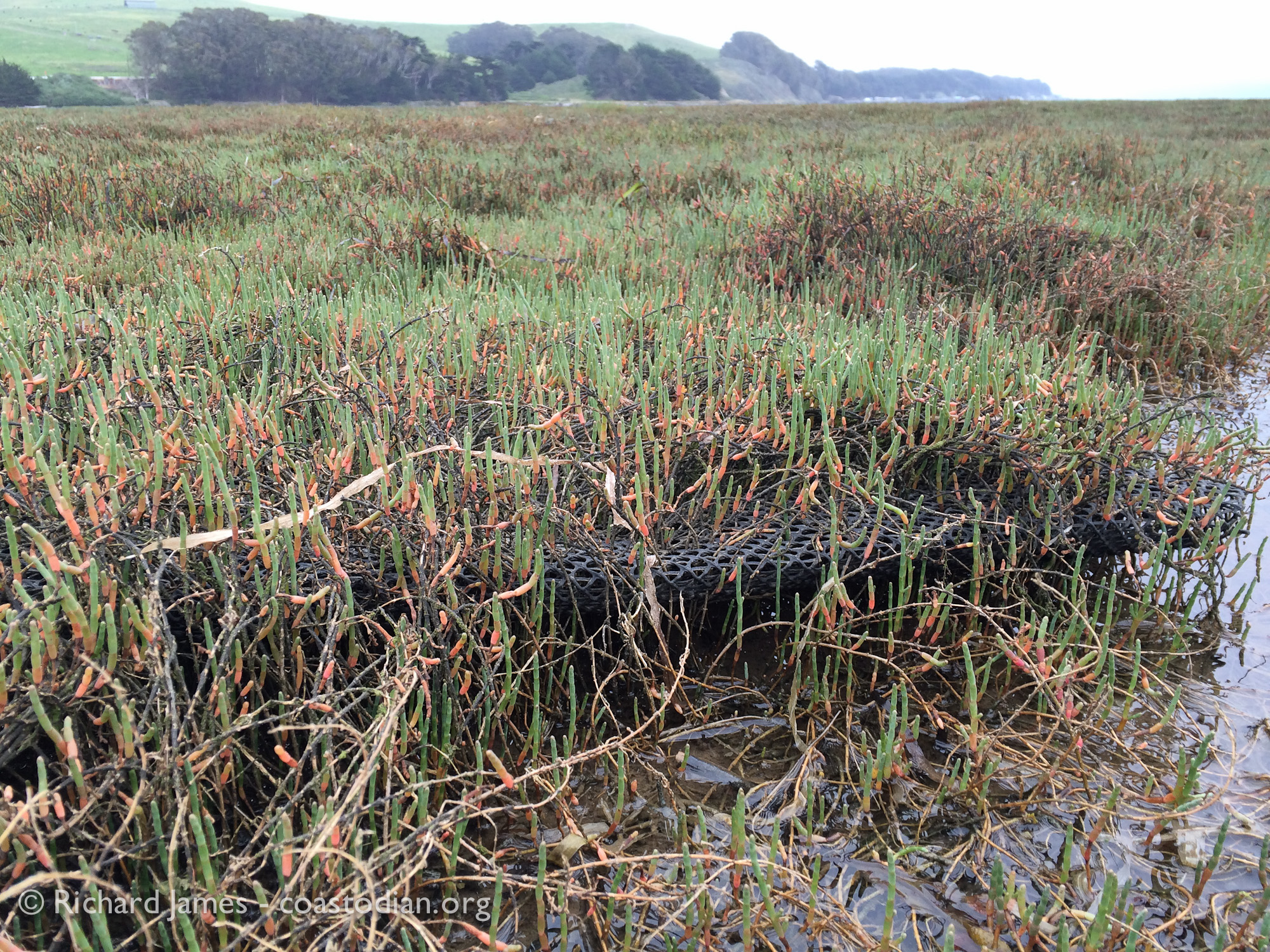 This bag lay here for less than three weeks!

Imagine if the growers came out a year later to look for this bag. Do you think they would have found it?

I had scoured this same area less than three weeks previously and that bag was not there.

No wonder the growers don’t find much oyster trash on their yearly cleanups, nature has enveloped their mess, making it invisible to their efforts.

Growers need to go out every two weeks in order to keep their mess from becoming a permanent part of the very same ecosystem they extract profit from. They need to walk the shores, as I do. At Hog Island Oysters and Tomales Bay Oyster Company, efforts to redesign gear to avoid these losses are underway, a good thing.

Now let’s look at my cleanup efforts from two consecutive weeks along the shore from Preston Point to the fence at the Audubon Canyon parcel at Tom’s Point, as well as a small section of the Point Reyes Oyster Company lease at Walker Creek. 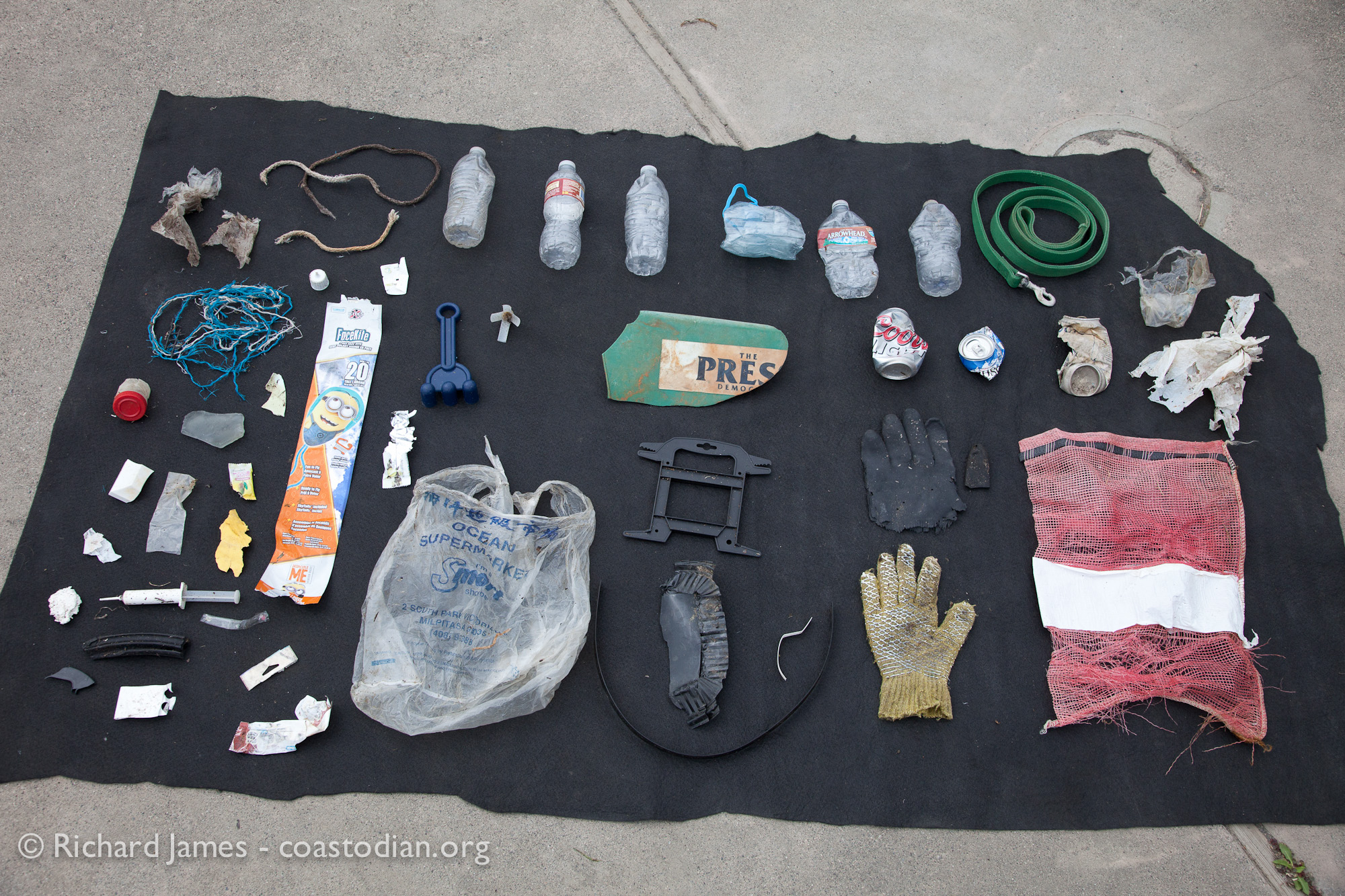 Alleged non-oyster litter collected on 3 May, 2015 along coast from Preston Point to Audubon Canyon Ranch parcel. 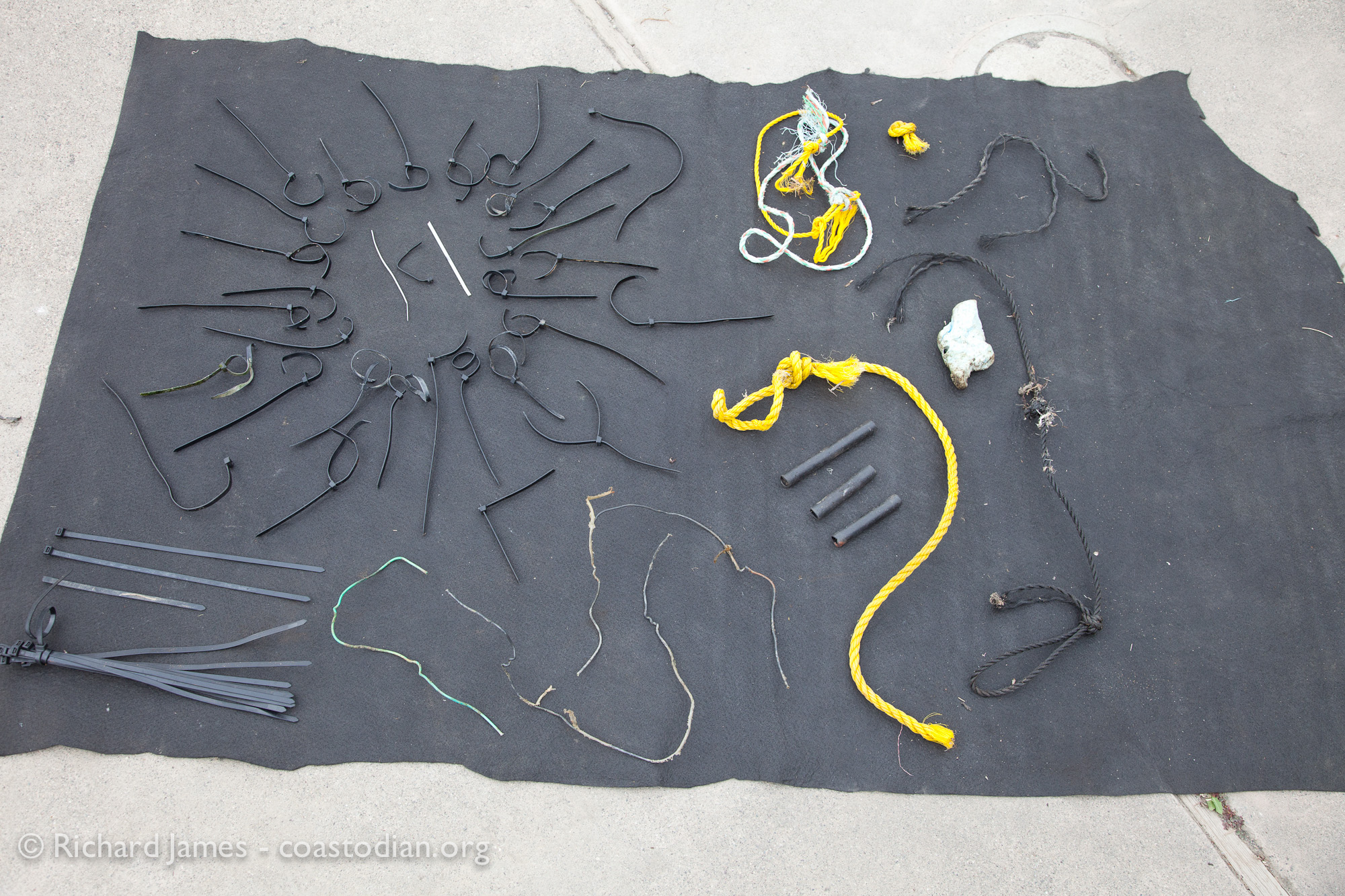 To the above items, add 53 grow-out bags, a very large volume of high-density polyethylene being ground into tiny bits by sand, wave and wind. 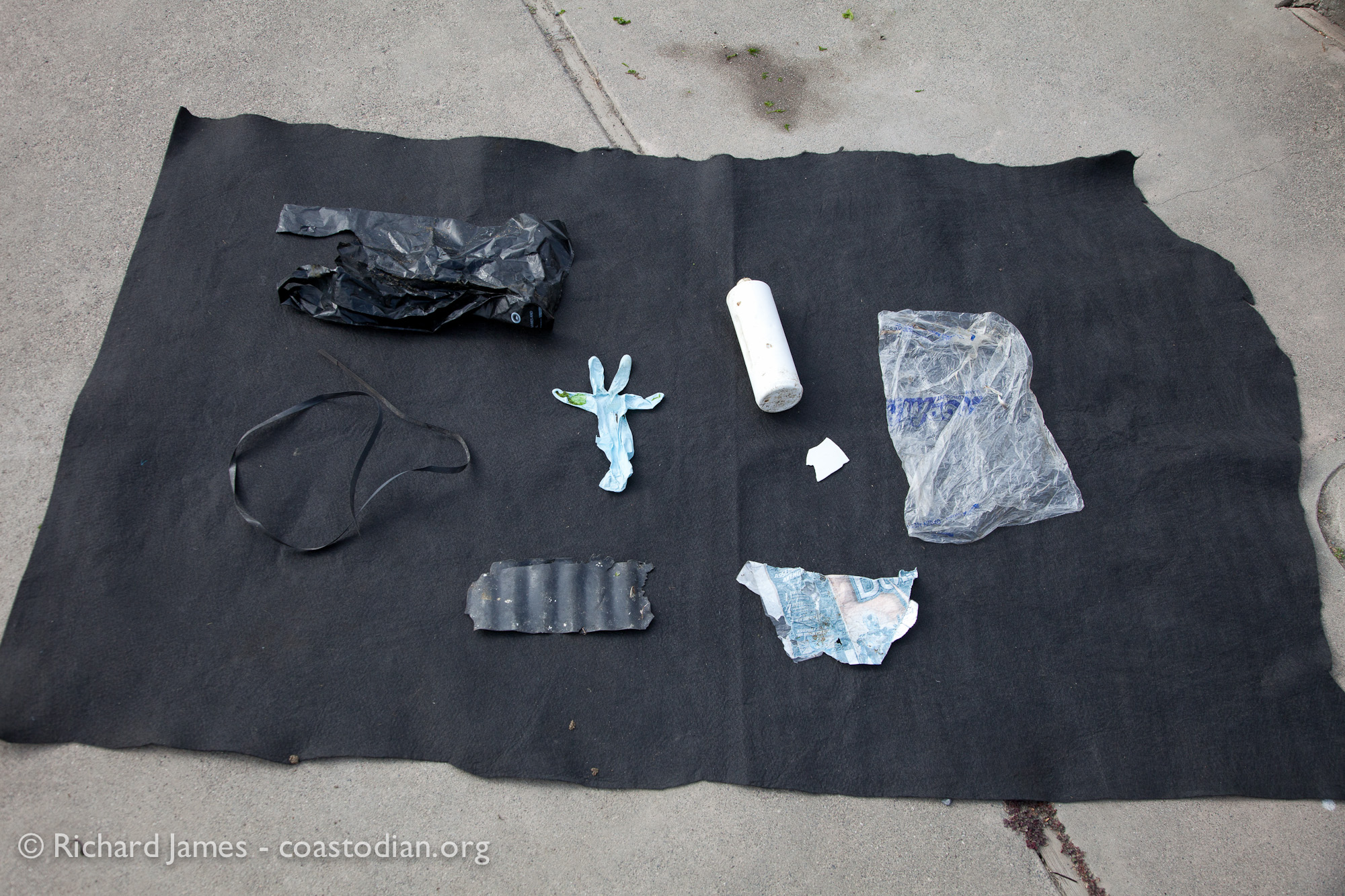 Alleged non-oyster litter collected on 10 May, 2015 along coast from Preston Point to Audubon Canyon Ranch parcel. 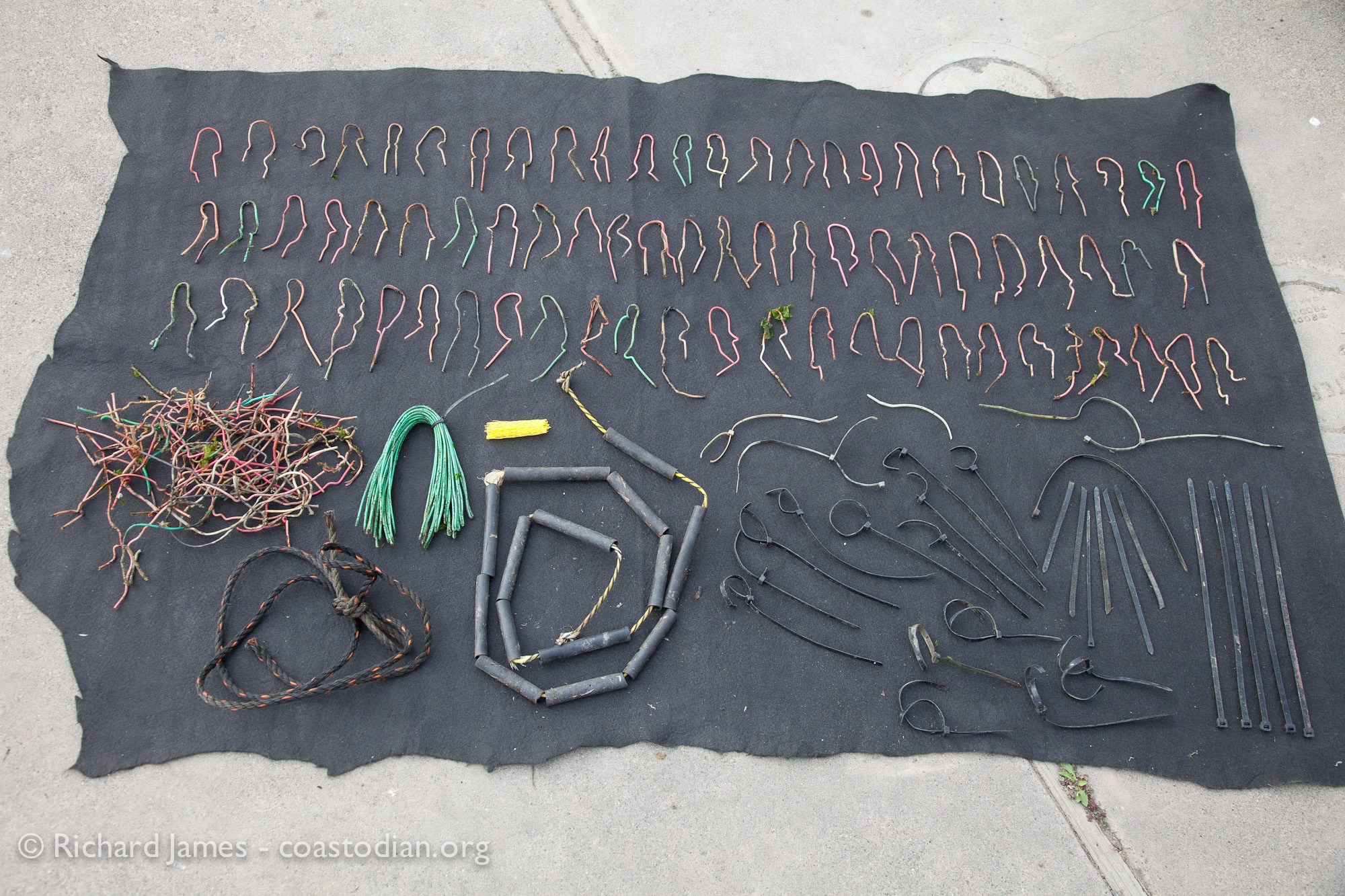 To the above items, add 154 grow-out bags, a very large volume of high-density polyethylene being ground into tiny bits by sand, wave and wind.

The ratio of “tourist” trash to oyster trash varies over the year, depending on weather and visitation.

If you don’t look for it, you won’t find it! Oyster growers need to get out of their boats more often, they will find what I find if they are willing to walk the shore and mudflats and look.
.

A list of proposed best practices I drew up was submitted to the Fish & Game Commission in April at their meeting in Santa Rosa. Both Hog Island Oysters and Tomales Bay Oyster Company are in the process of redesigning their gear, both of which I applaud. With better gear to withstand the beating doled out by sun, wind and waves, less of this gear will go missing, which means a healthier ecosystem for all.

On 22 March I once again visited the oyster lease area at the mouth of Walker Creek in Tomales Bay.

I am pleased to report that much work has taken place and the amount of debris is significantly less. There are still many large diameter PVC pipes of unknown length in the channel, as well as shell-filled oyster bags to recover, though it seems these too will be removed.

This short video will show you the status of this structure as of 22 March, 2015.

Here is a view of the structure as I am drifting down Walker Creek channel.

What follows are some stills of the area that is being returned to a natural state.

As always, click on an image to see it larger. 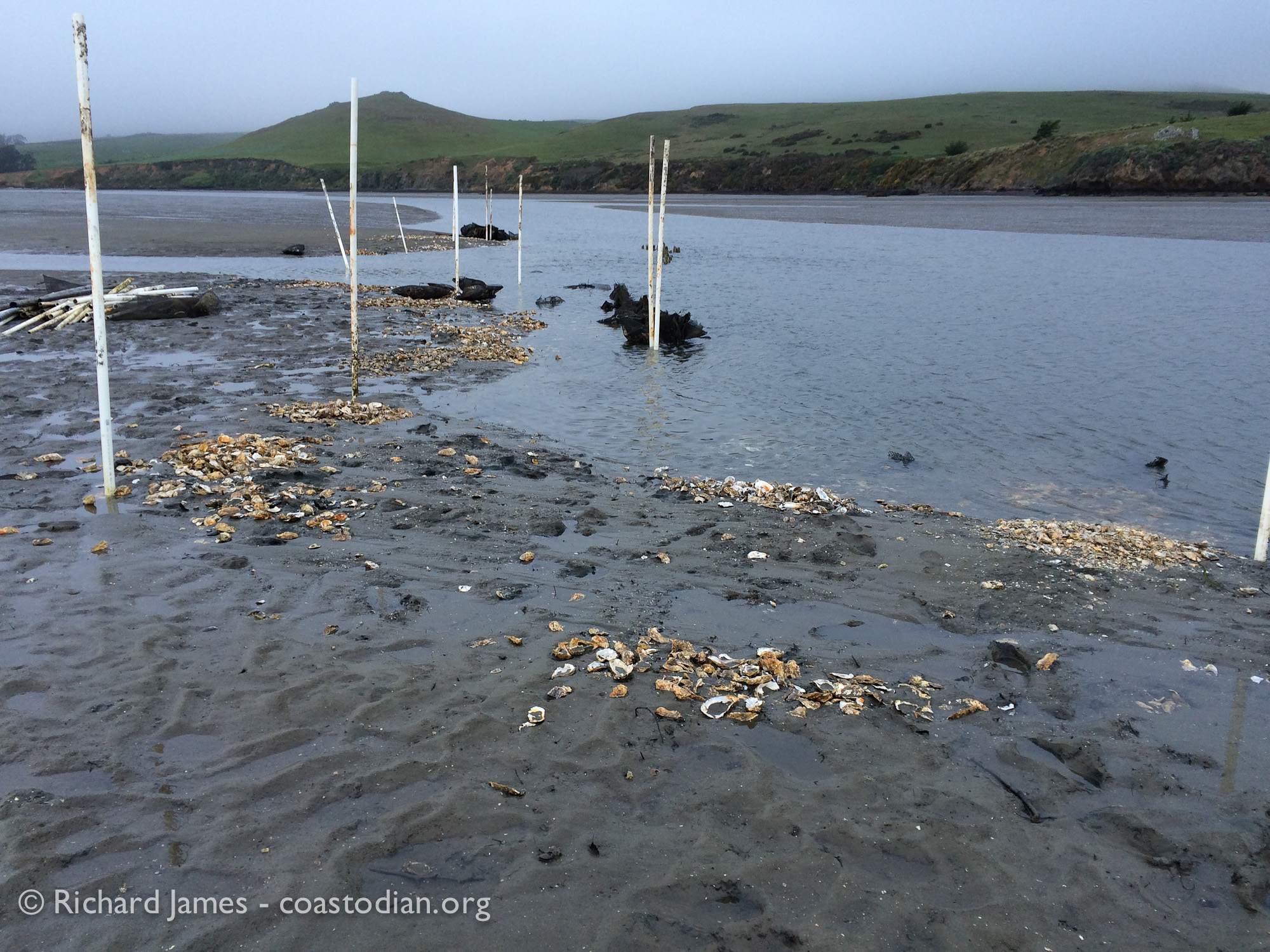 Area of unpermitted structure in Tomales Bay at Walker Creek 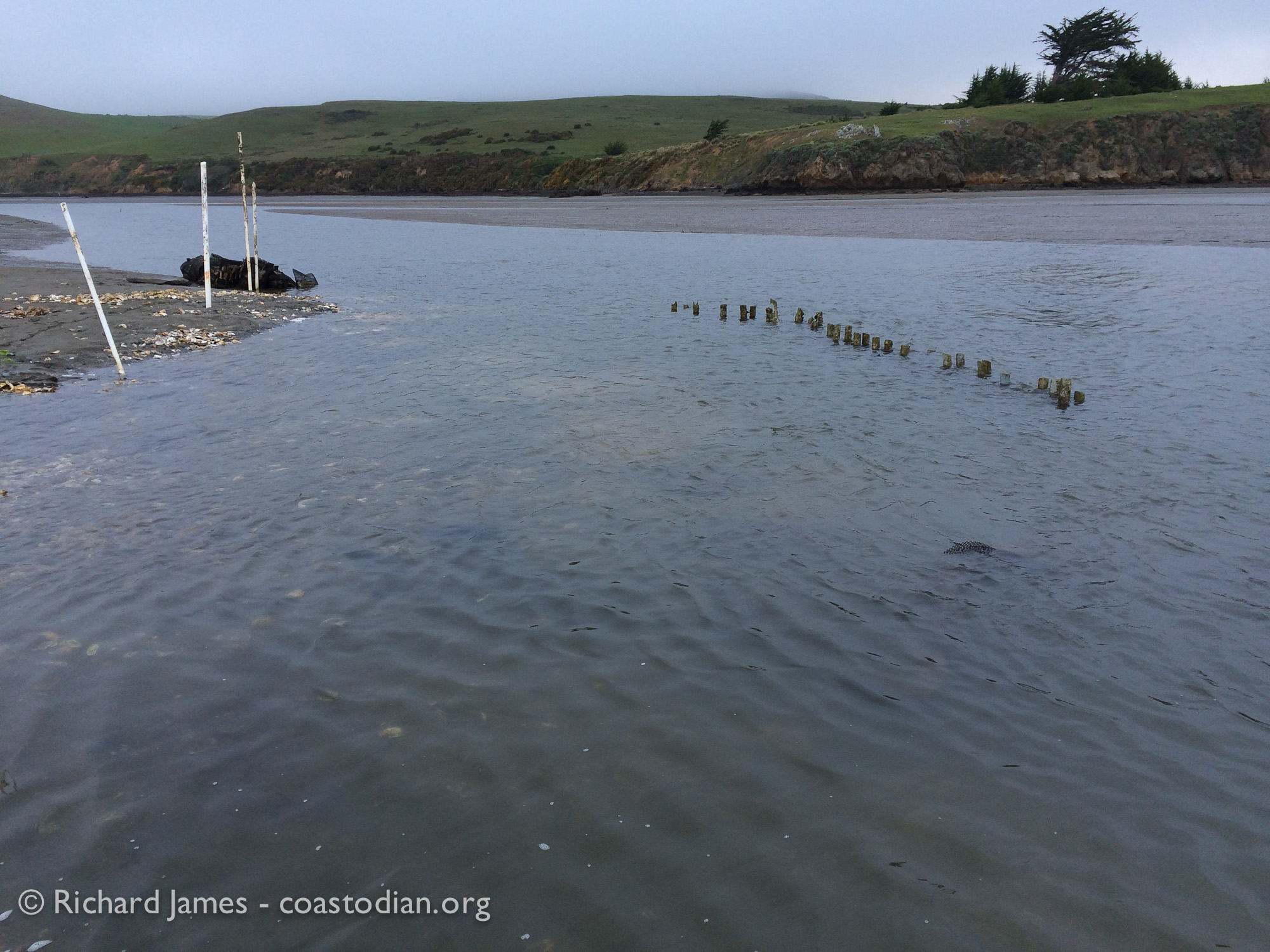 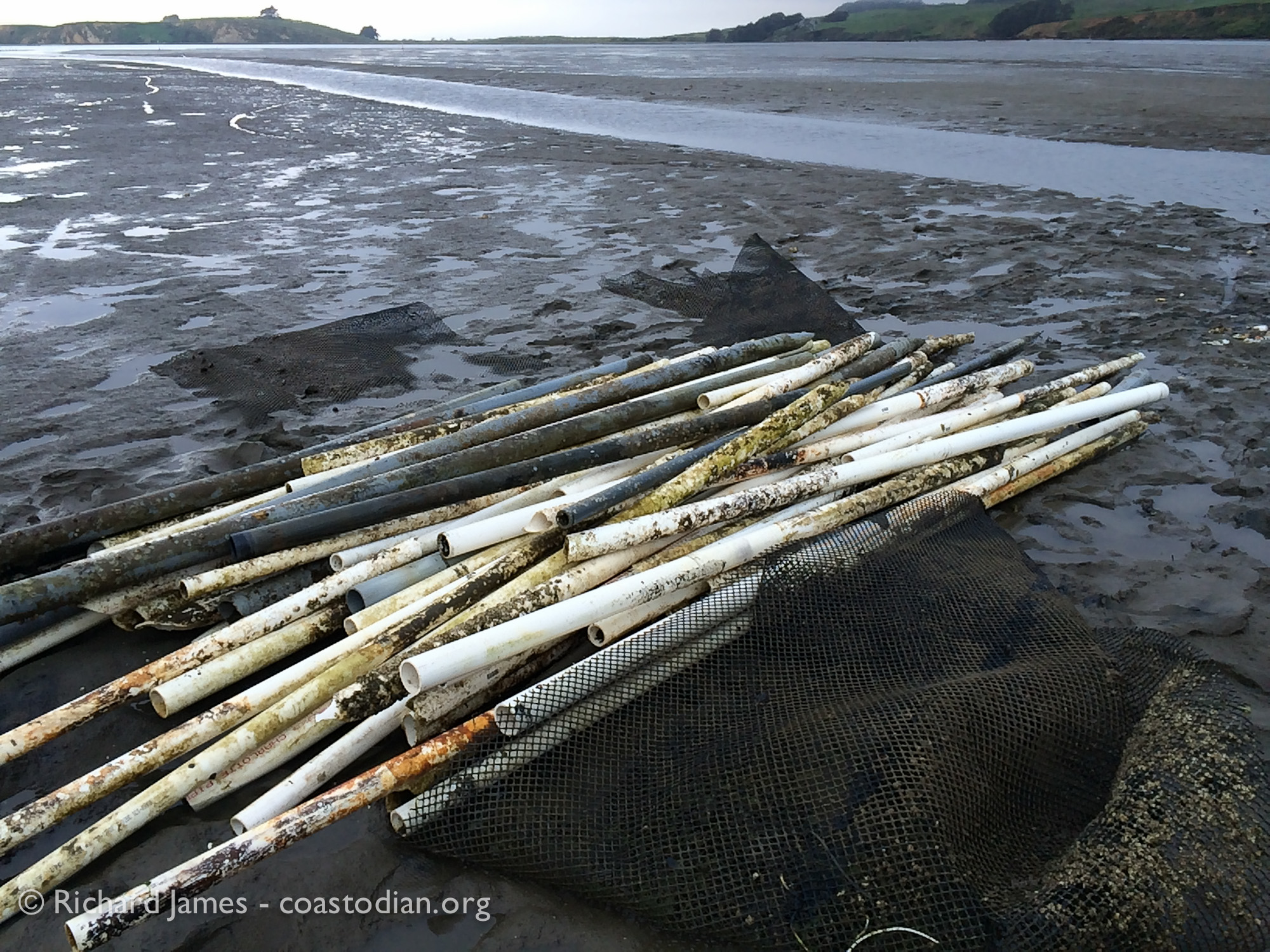 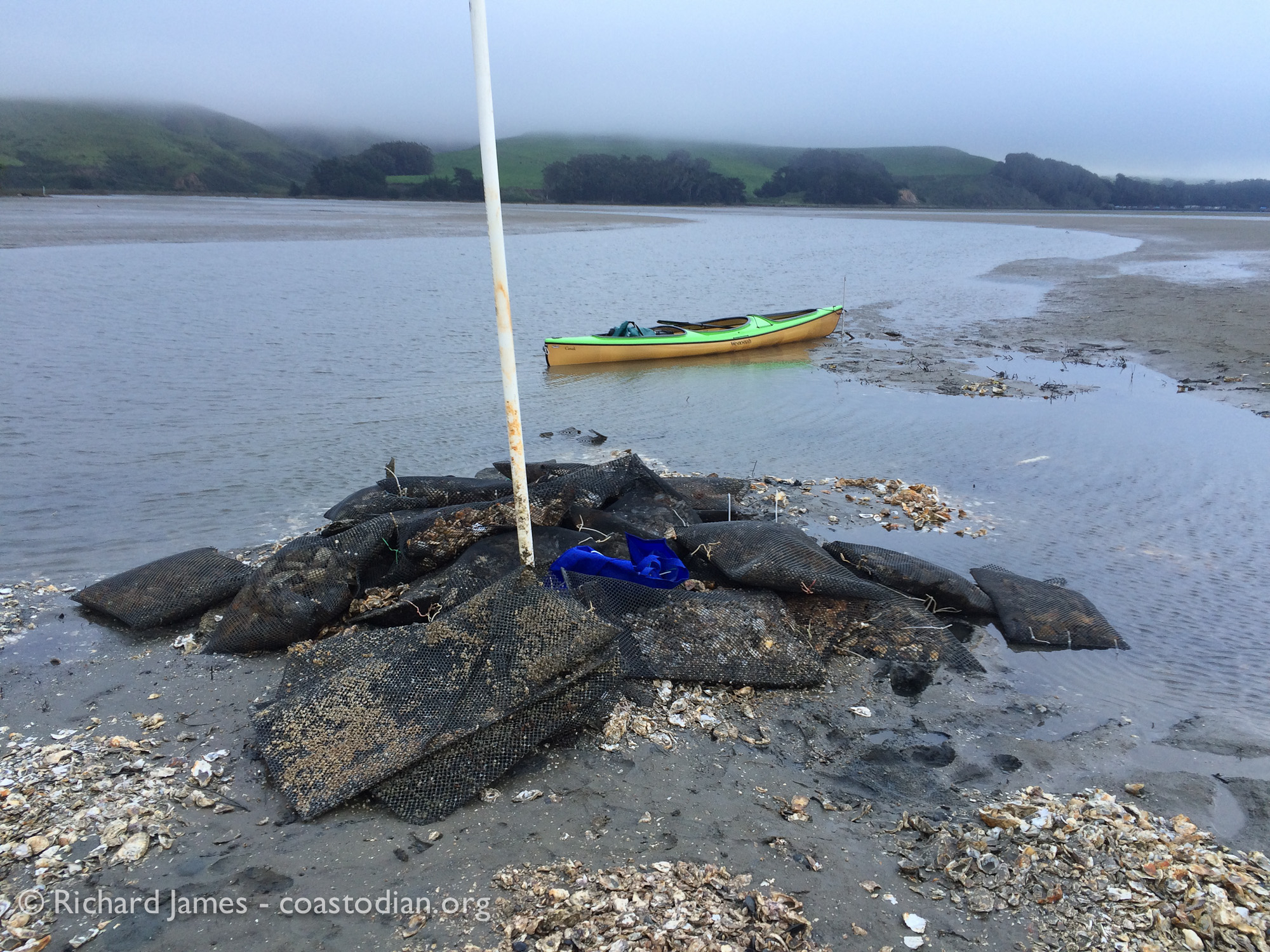 Saturday morning while walking the shore of the Bay picking up oyster farming debris just south of TBOC, as I have done for the past few months, something most interesting happened.

Two TBOC employees saw me with bag in hand heading south along the shore, stooping down to pick up the bazillionth discarded cable-tie (zip-tie, tie-wrap), they shouted at me in their accented english, “Hello mister, hey, hello, can we help you?”

Can they help me I thought to myself?

They sure can I thought to myself. I stopped and turned, waiting a few seconds as they jogged over to me.

They both looked a little confused.

“Basura, mucho basura todas.” I offered in my simplistic spanish.

I dug into my bag and showed them the handful of cable-ties, wire segments, oyster tags and rope I had collected.

Eric, I later learned his name, said “We do the best cleanup of the bay of all the oyster growers!”

I chuckled a few times, shaking my head. “I’ll have to disagree with you there. I have cleaned up nearly this entire bay shoreline a couple times, and the area around TBOC is by far the messiest, covered with oyster trash.”

I explained that I had been cleaning this shore near their operation for months, bagging what I’d found, and dating each bag, as well as photographing the hundreds of grow out bags I’d found nearby. These photos are up on the internet I told them.

They asked me if I’d talked to Todd about this. Yes was my reply, with little to show for our discussion.

After a little more discussion, I thanked them for their time, we shook hands and parted ways.

I continued walking south, picking up what I’d missed on the way north.

Not five minutes after the boys had left, I turned a corner of the shore and not two-hundred feet south was Todd Friend walking towards me, with a large stick in his hand.

Hmmm, this could get interesting, I thought to myself.

He saw me and then reached down to pull a large two by four out of the driftwood pile, abandoned oyster racks likely.

As we closed on one another, it became apparent that Todd was picking up trash as well.

In another minute we were upon each other and he said “Hello Richard.”

We talked a bit about what I’d been finding, I showed him the contents of my bag, explaining this was a fraction of what I had usually found. He explained the likely source of each item.

The upshot of our conversation is that he agreed that TBOC had been leaving a mess and that they could do better.

I explained that if they did good things on the bay, I’d write good things about them. He looked me in the eye and said “Deal!”

I asked about changing methods so that less gear was lost. I also asked if TBOC talked with other growers about best practices. He said not really, but a meeting of all the growers was coming up.

I shared a different way of attaching bags to the line used by a grower further north, the clips cost more, but they lose much fewer bags, so it actually costs less.

This is great news and I hope to hear more of their plans to reduce lost gear.

I’ll continue to record debris locations and offer maps to the growers. It would be great if they could use their boats to get to remote areas, then walk the shore to recover gear, as walking is the best way I have found to find lost gear.

Click on the words “Save our Tomales Bay” above to see this post as it was intended to be seen.

For the many thousands of you that wait on the edge of your recliner for my next batch of images showcasing the worrisome ways in which humans lay waste to the watersheds of the world, I apologize.

Today while visiting the shore of Tomales Bay, as I have the past few weeks in search of debris to remove from the shore and water, I found that much of it had been removed.

Last week I opined that with the volume of oyster grow-out bags still littering the shore (hundreds), either the people that put them there would need to pack them out, or I’d need lots of help.

I’m, not sure who did it, but thank you! 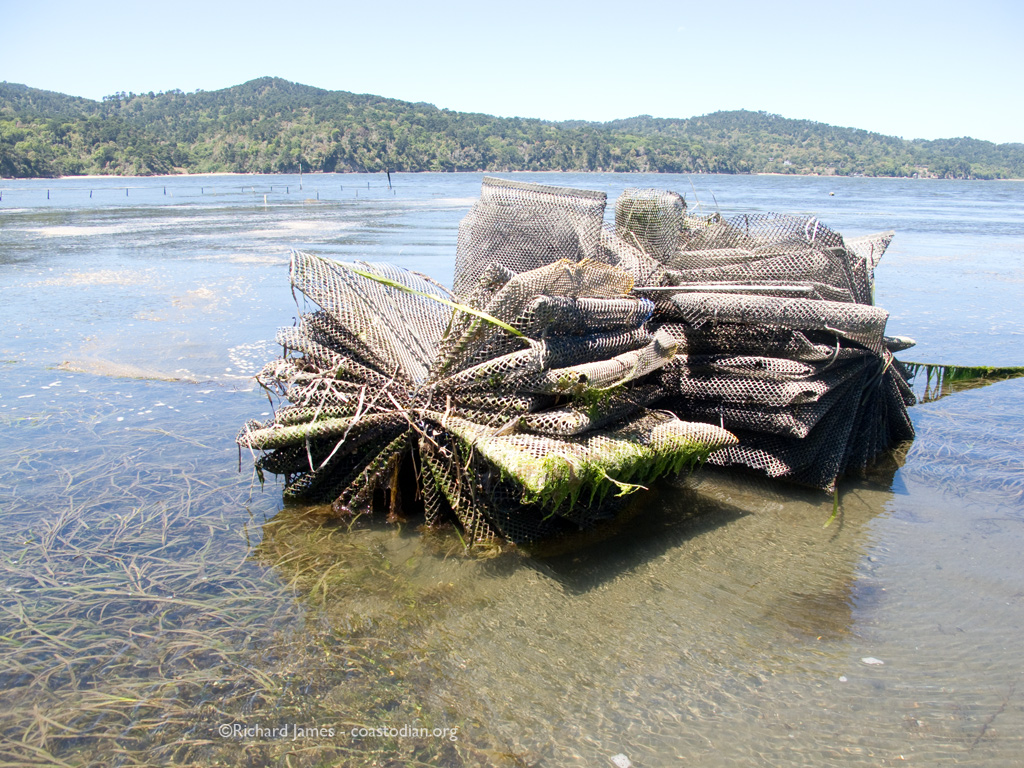 The above bundle of bags is gone, Hopefully retrieved and no longer poised to explode and spread plastic all over the bay. Thank you.

Today the tide was higher and I was on land, not in my boat. So I had no easy way to see if the piles of iron and dozens of submerged, gravel filled bags buried in the bottom have been removed. I hope they were. I’ll come back again to see.

I did find fewer than ten bags on shore and only a few in the water. 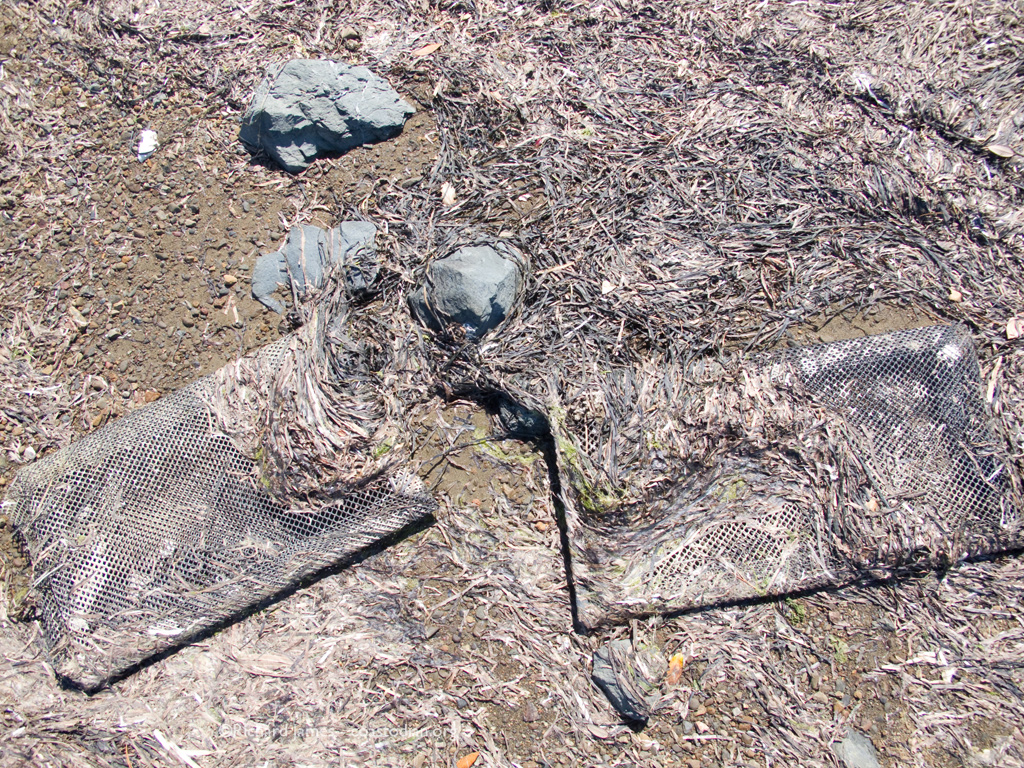 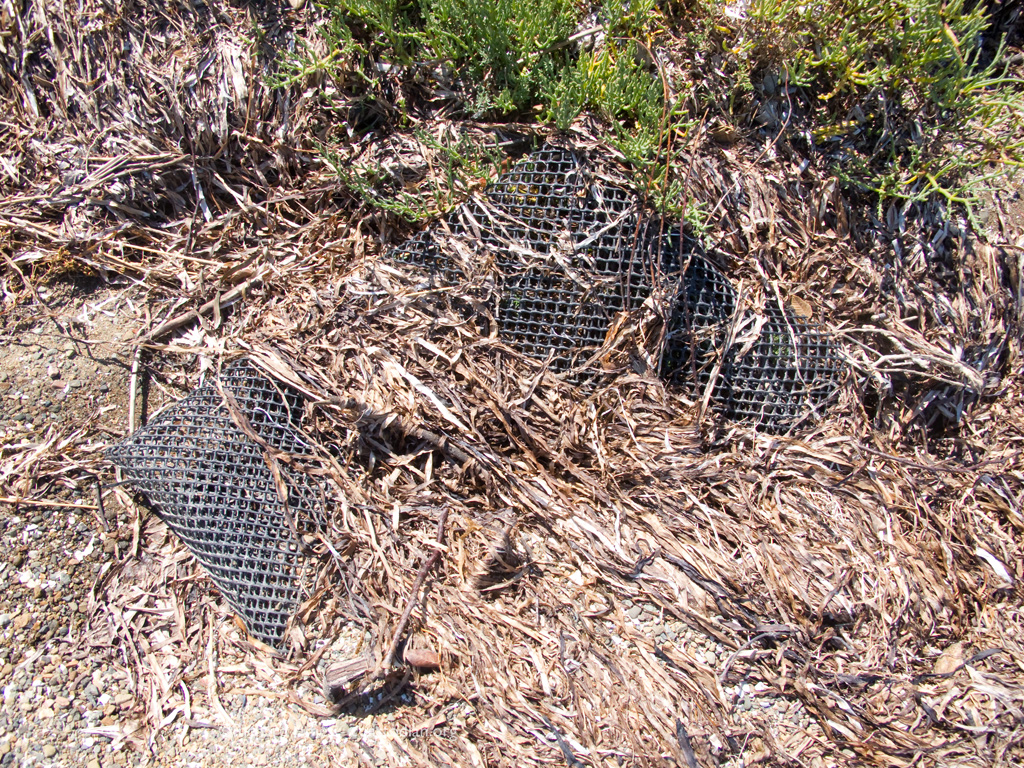 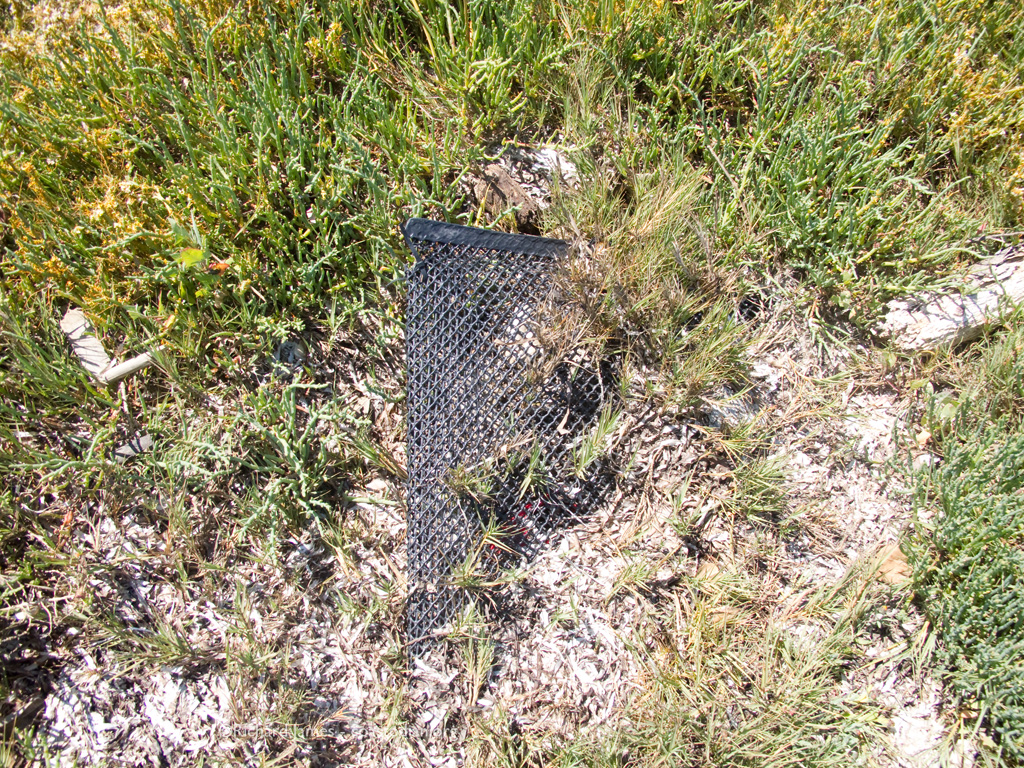 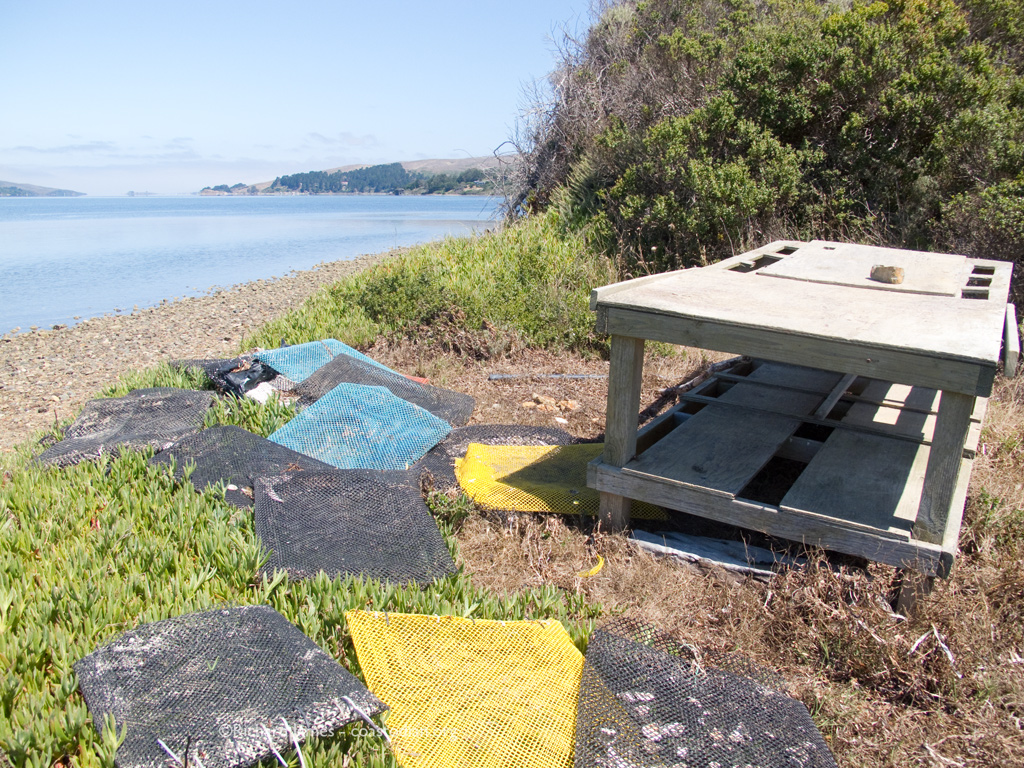 This work site still had the fifteen or so bags laying about I saw weeks ago. I left them then, and I left them today. The wind can easily take these bags into the water where the tides can carry them out to sea. Surely this work area can be kept cleaner! 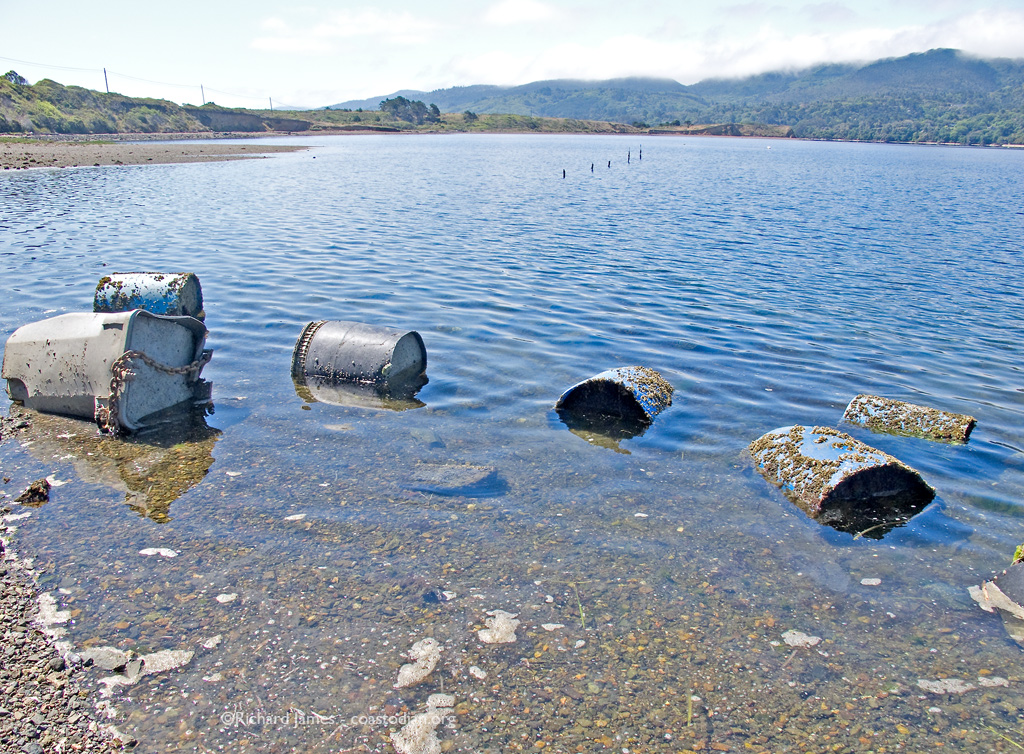 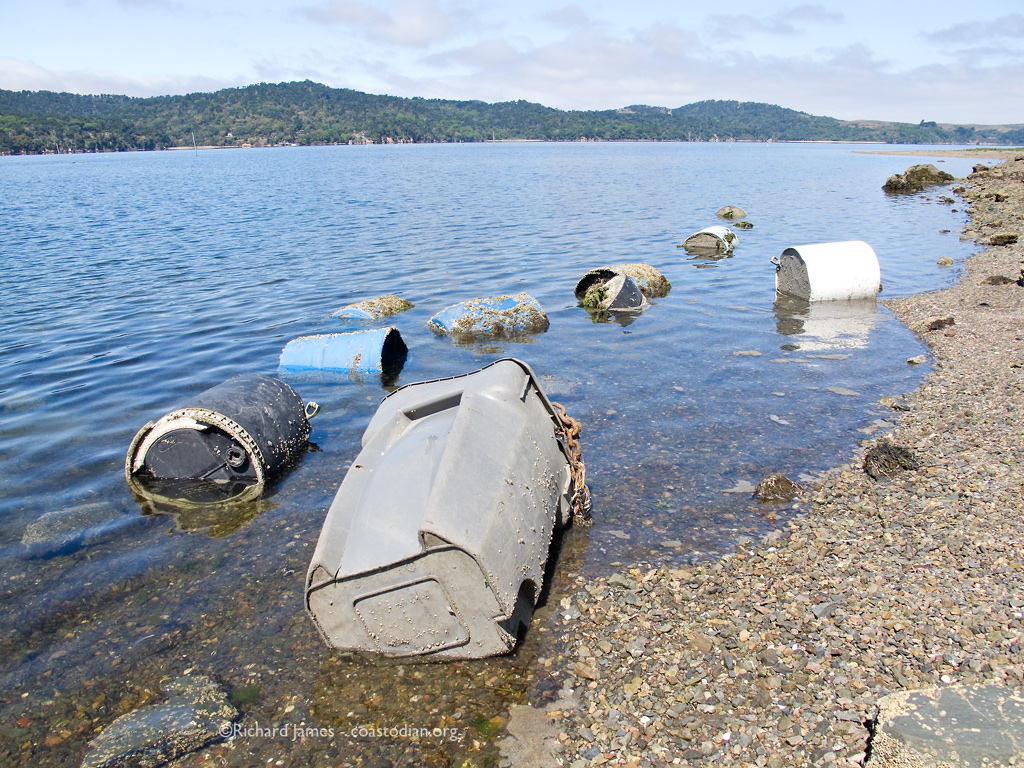 The sad new discovery was the anchors shown in the banner image and again above. Ten to twelve large plastic trash cans or barrels filled with concrete. Who left these here? This is 2013, not 1950. We have known for a long time that we can’t simply extract resources and leave our mess behind for others to deal with. Our planet is buckling under the damage caused by that out-dated thinking.

Who amongst you has an idea on how to get this blight out of Tomales Bay? 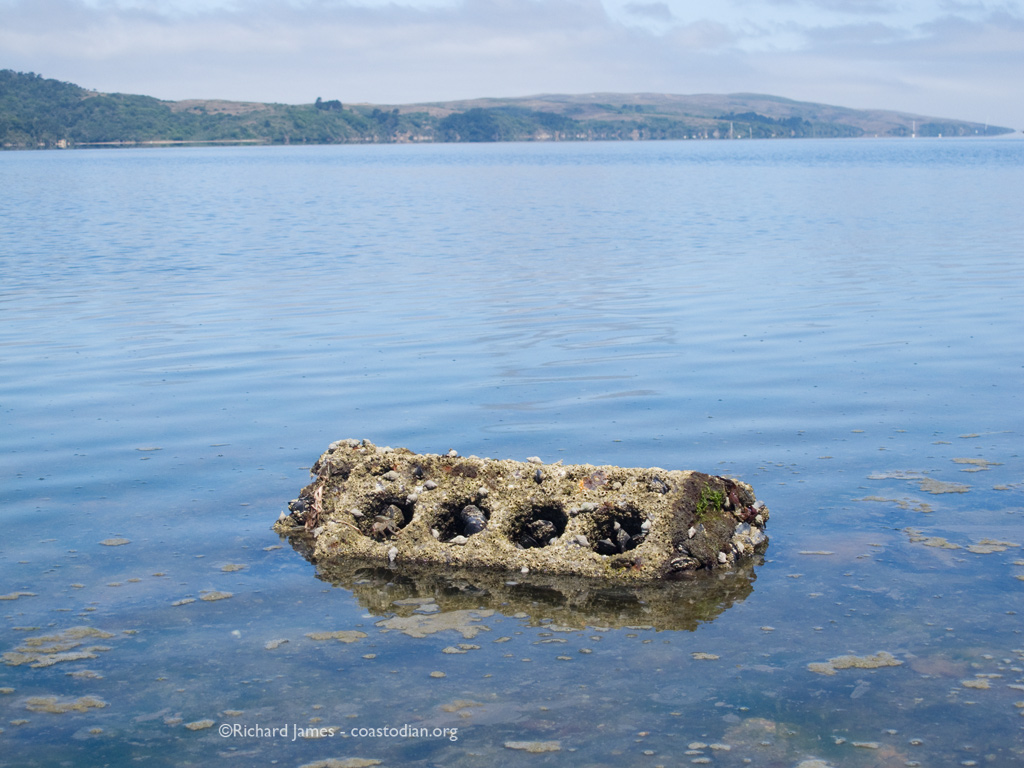 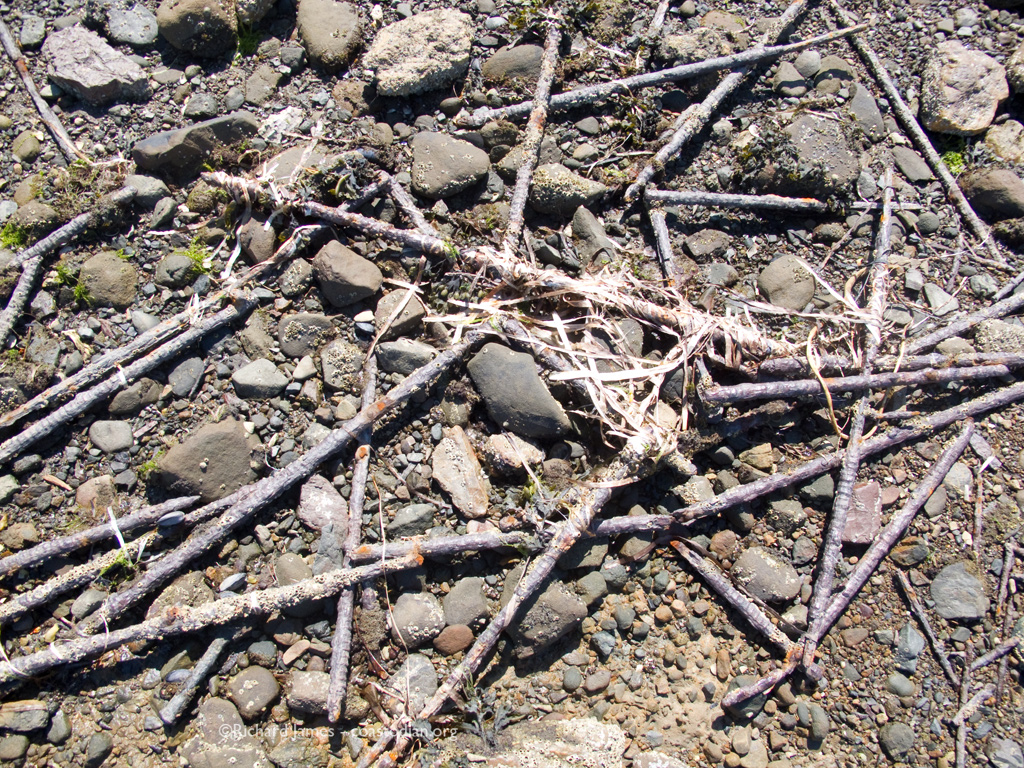 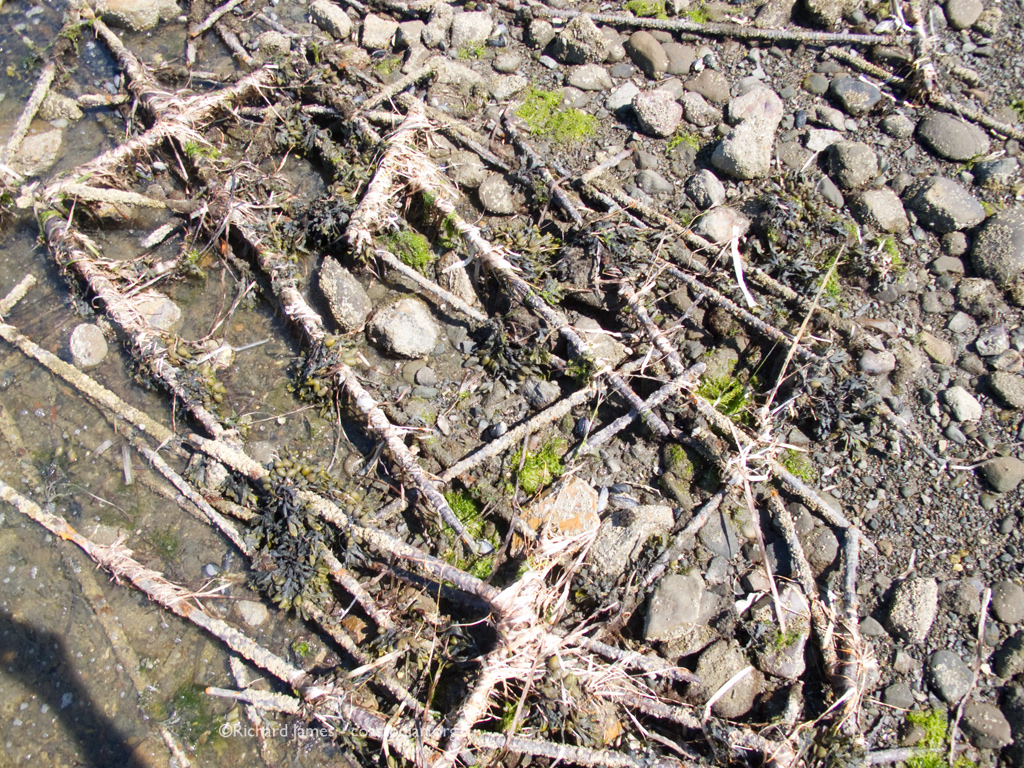 Next I plan to visit the area around Walker Creek and Preston Point to see what sort of monuments to the human madness are mired in the mud up that way. 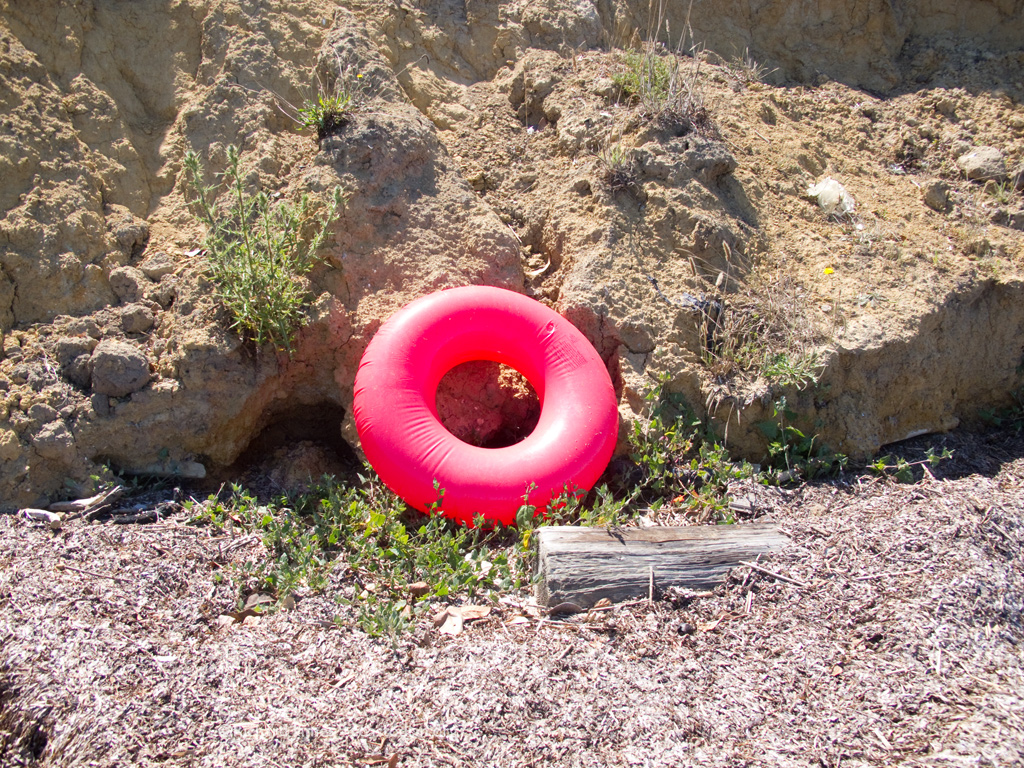 Here are a few images showing what a healthy shoreline looks like, plastic free! 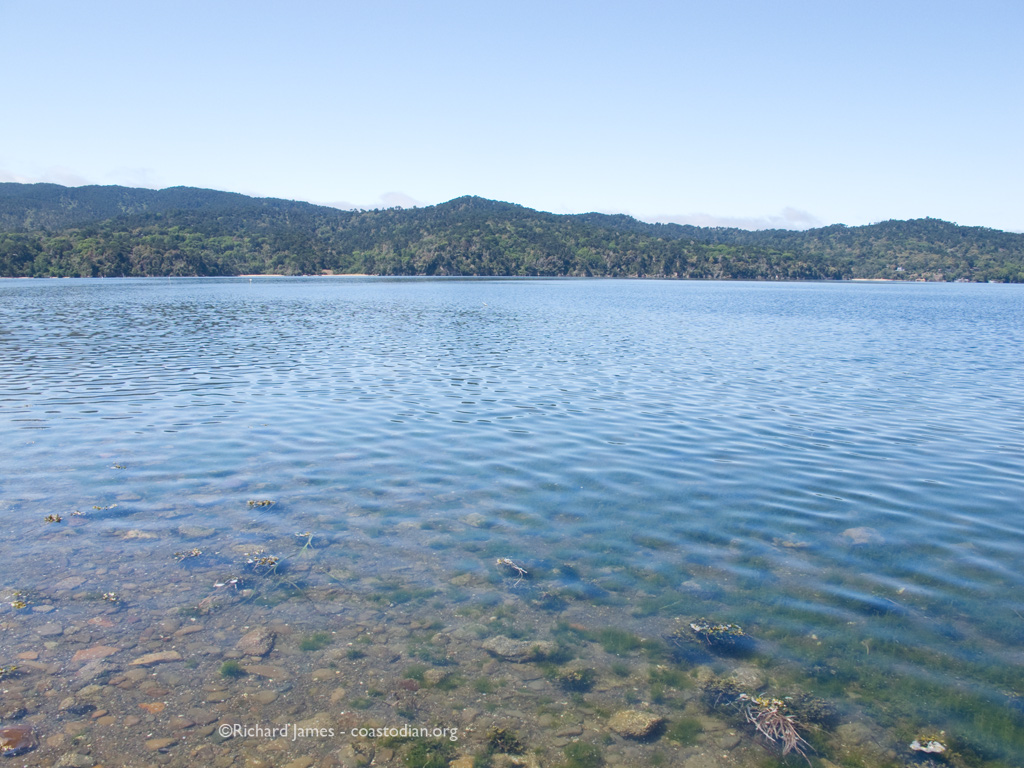 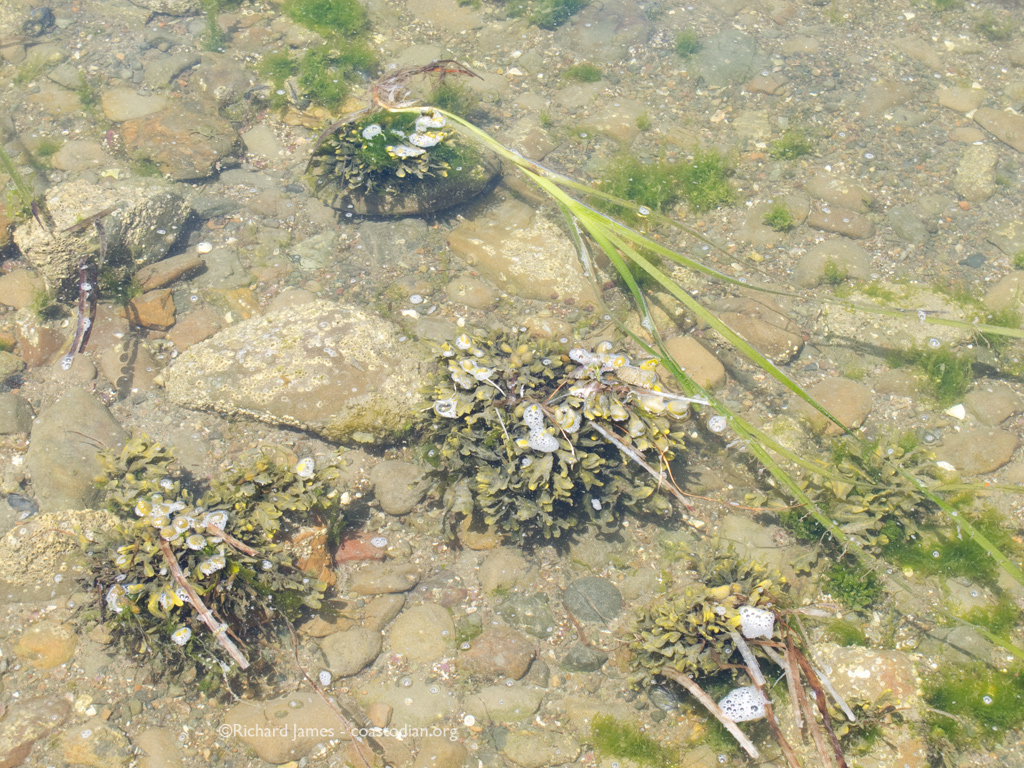 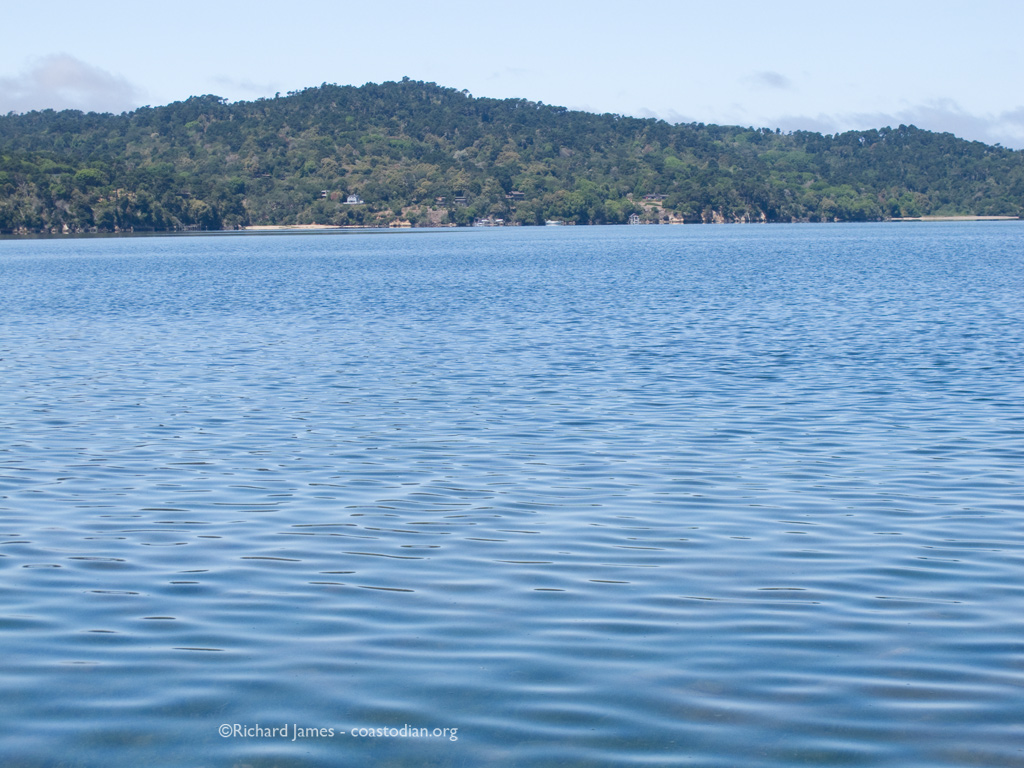