The day before Thanksgiving was the first big rain of 2018.

The rain rinses the smog, plastic, cigarette butts, urine, oil, feces and all manner of other items off the streets of our cities into creeks, rivers, storm drains and eventually the ocean. The same ocean that has been feeding us for millenia

The same ocean we are destroying with our trash.

For three years now I’ve made sure to be at Lake Merritt in Oakland CA for the first flush.

Because I learned that it is where at least 62 storm drain pipes, fed by hundreds (thousands?) of storm drains feed water and what it washes from the streets, into Lake Merritt. Actually Estuary Merritt, since it is connected to San Francisco Bay and the Pacific Ocean and the world’s oceans.

For the past decade I’ve been packing trash off the beaches of Point Reyes Seashore. Among all the other garbage I pick up are needles. Syringes. Sharps.

I’ve picked up perhaps 150 during that time. Enough that I no longer walk barefoot on beaches.

For a couple years, when I saw families out to enjoy the beach in the winter (when the needles usually show up), I would sometimes quietly explain to parents on Drakes or Limantour Beach that they might want to be careful and keep an eye on their children, as I find hypodermic syringes on this beach in the winter.

This suggestion was usually met with wide eyes and thanks.

More than several times, after their eyes got wide, their faced screwed down tight as they berated me for ruining their only time to get out to the beach with their children.

I no longer warn parents about the needles.

If you’d like to educate yourself about one of the major causes of the opioid crisis depicted below in images, read the following articles:

Origins of an Epidemic: Purdue Pharma Knew Its Opioids Were Widely Abused

Investigation: The DEA slowed enforcement while the opioid epidemic grew out of control

The Family That Built an Empire of Pain

Below are images showing what I collected on 21 November over a few hours from one pipe in particular.

As always, click on an image to see a larger version. Please contact me if you wish to use any of my images in any way. All images ©Richard James – coastodian.org

Yellow pollen washed off the streets paints an oddly beautiful sheen on the surface, pocked with garbage from humans.

Shortly after I arrived in the morning, this was how much debris had arrived.

A pair of hungry snowy egrets perches atop the oil containment boom installed twenty years ago. Imagine if when you went to the market to shop for food, the vegetable section was littered with garbage, bags of feces and syringes.

As the rain kept falling, washing more debris from the streets of Oakland, the debris piled up.

Toni was out for a jog this rainy day. After she learned what I was doing, she asked if she could help. Of course I said, explaining she had to BE VERY CAREFUL.
She used a second litter-grabber I had, got on hands and knees and plucked out 15-20 needles. Stopping only when she was shivering too much. She thanked me for caring (I thanked her too) then jogged off in the rain.

45 minutes later, warmed from her run, she starting plucking needles out again, stopping only when she again started shivering too much to be able to hold the grabber. THANK YOU Toni!

A passerby told me the orange sandals are issued to inmates at Santa Rita jail.

Blue and pink plastic vials of sterile water or saline (called bullets on the street) are given to IV drug users by needle exchange programs to mix with whatever it is they plan to inject themselves with. It would appear the needle exchange model is not working given all these lost needles endangering our community and ocean.

This sleeping bag weighed over 100 pounds when I carefully pulled it out of the water to drip dry. There were six needles on or in it, good thing I know what to expect when dealing with trash around the East Bay.

Click on the words above “Dungeness Crab Season is here – How do I know?” to see this entire post

You might think I know it is crab season from all the fresh crab for sale in the market.

More poignantly, I know it is crab season because of all the ropes, buoys, broken bits of buoys, bait jars, bleach jugs, crab traps and other trash put in the sea by crab fishermen that washes up on beaches all along the coast in California.

All the trash deposited on our beaches and in the sea as they extract profit from the ocean.

And none of them will help clean it up.

And the California Fish & Game Commission and California Department of Fish & Wildlife does what to correct this behavior?

We need a seafood fee.

Crab should cost twice what it does, with half going towards cleaning up the mess made by the fishermen catching it.

Same for oysters, salmon, all seafood.

Everybody wants cheap everything, yet nobody gives a damn about the health of the planet that provides everything.

Instead of throwing science at the problems we’ve created.

How about we get out of the way and let nature solve it?

From other walks along the beach 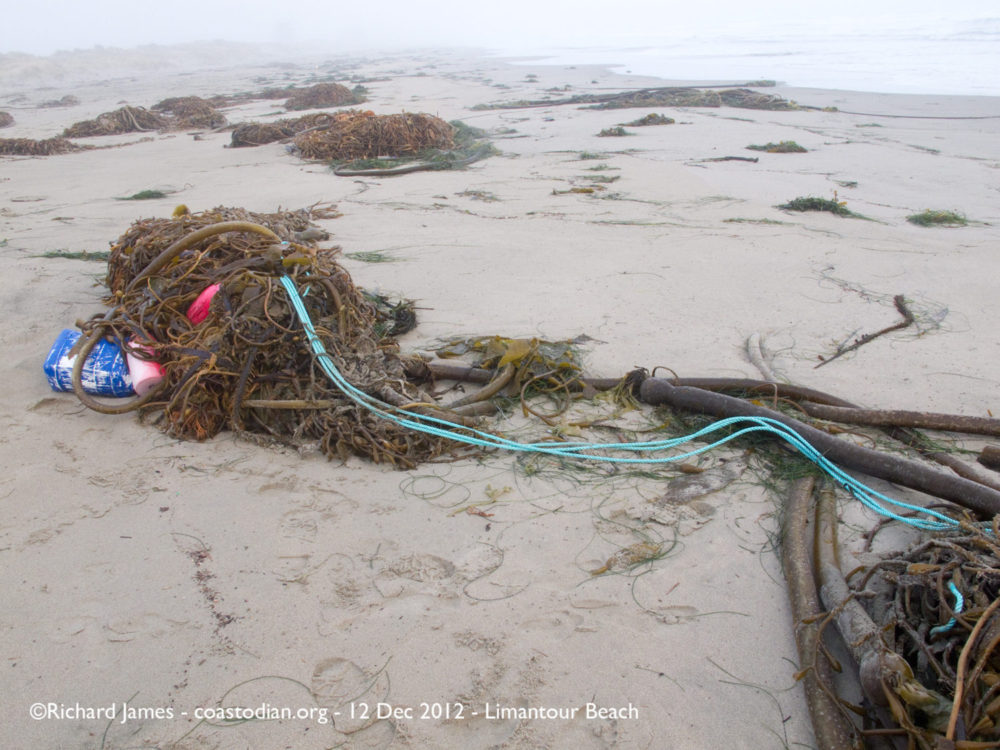 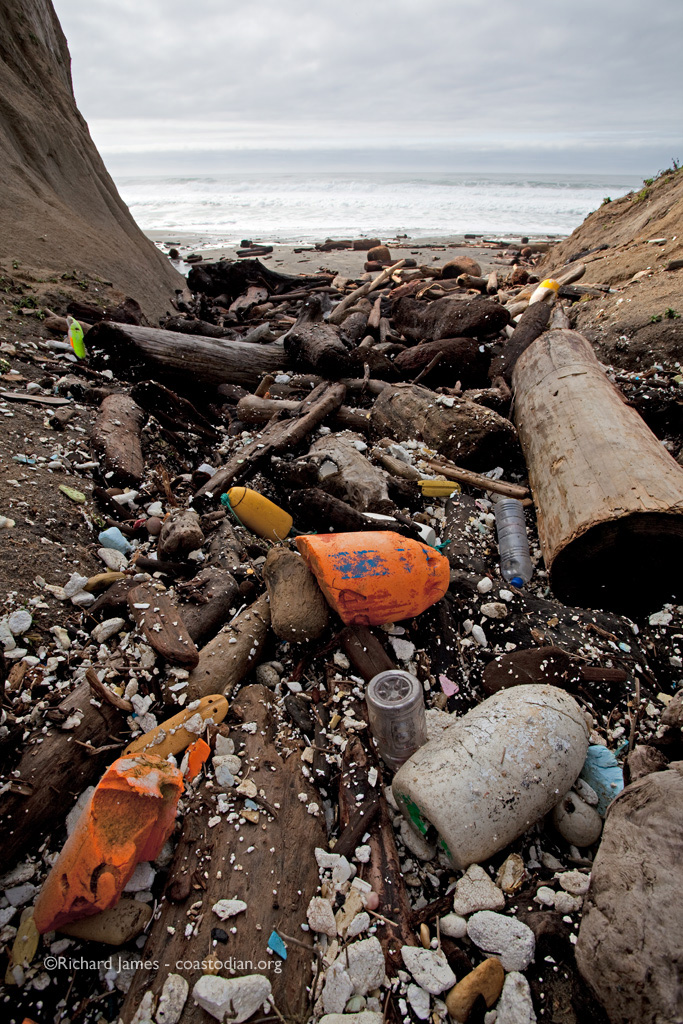 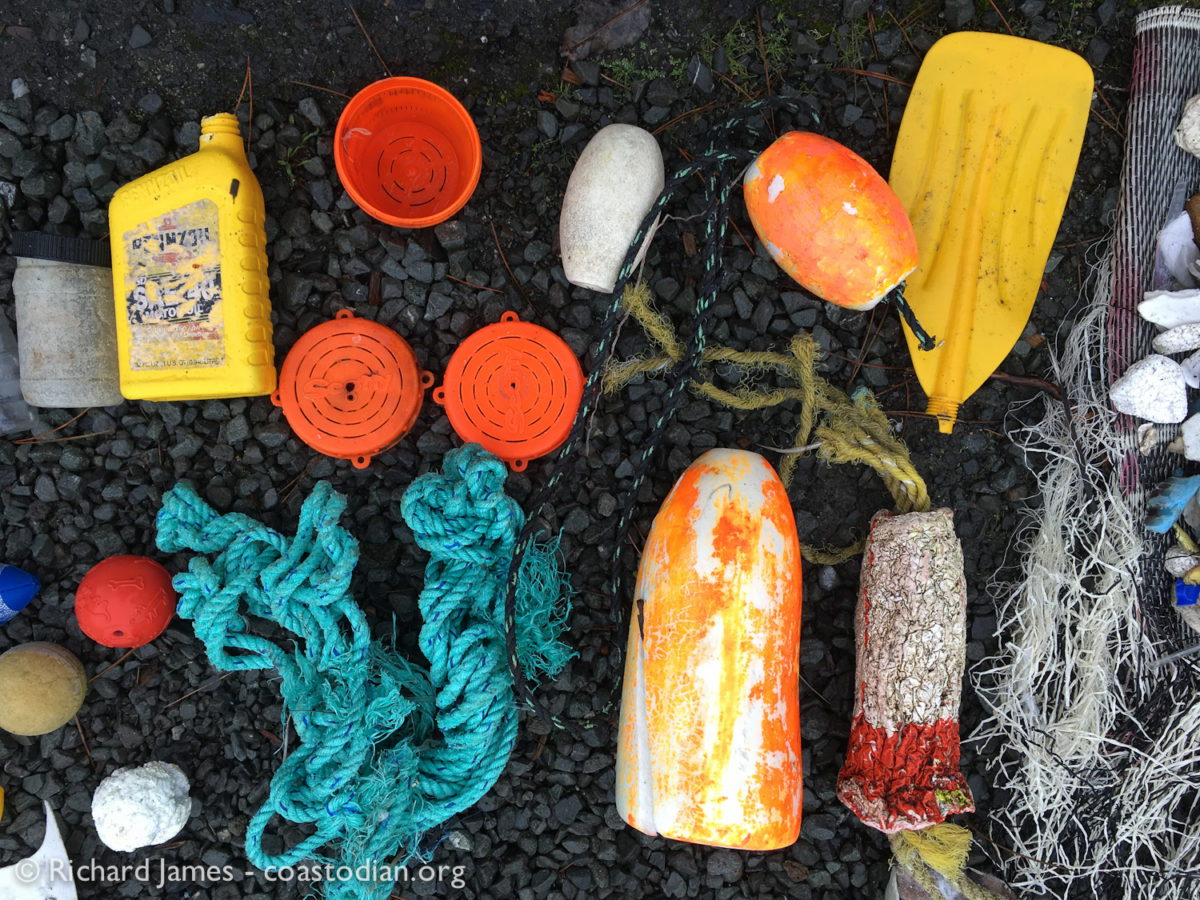 Commercial crab fishing – why so much trash in the sea?

Crab fisherman on strike for $3 a pound, should hold out for $6! Seafood tax a healthy idea.