I just now sent the following message to Zeke Grader by email. I hope he is able to keep Mr. MacLean from wrecking any more boats along our coast.

Mr. Grader is the Executive Director of THE PACIFIC COAST FEDERATION
OF FISHERMEN’S ASSOCIATIONS, and, as I understand it, a long time friend of Duncan MacLean.

I’d like to relate to you my day, so that you will do everything you can to stop Duncan MacLean from ever captaining another fishing boat.

It is 9 pm and I just stepped out of the shower and my eyes are still burning from the fuel that coated me today as I wrestled in the surf with the remains of the fishing vessel Sea Biscuit, captained by Duncan MacLean.

Yesterday I received word that help was needed to remove debris from Pinnacle Beach near Bodega Bay. A fishing boat had wrecked and people wanted to clear the beach before the holiday weekend.

I drove up around 3 pm, signed in with the Surfrider people and hiked down onto the beach. My large pack full of wetsuit, booties, mud boots, bags for debris.

For an hour or two I ferried loads around a rock point so that a truck could come get them. 20-30 others did the same.

Then, as the tide became low enough, along with a dozen others, I pulled all manner of cables, fuel lines, electronics, hull pieces, fishing line from the surf. All of it coated with fuel.

I am told a helicopter will be on site next week to extract the engine, fuel tanks and other large items.

For a week now, dozens of people have cleaned up after Mr. MacLean, AGAIN!

I was witness to the results of his grounding of the Barbara Faye on 12 May at Limantour Beach in Point Reyes National Seashore. That cost the NPS over $80,000 of tax payer money. The coast guard, fish & game and others paid too. The fuel was pumped off the boat that time, I heard at a cost of over $20,000. This time, the fuel leaked into the sea. I saw the colorful sheen on the water, I feel it stinging my eyes as I type this.

Mr. MacLean walks away, maybe handing out a dead salmon to those that give him shelter or a ride. He carries no insurance, expecting others to clean up after him. He usually fishes alone for days at a time, see below for an idea of how he manages to stay awake for so long by himself.

This is the second boat Mr MacLean has grounded at Point Reyes. His first was near the same spot at Limantour in 2000.

I heard today that he has wrecked 4, maybe 5 boats in his time. I also heard that he has a drug problem. I spent 30 seconds searching the internet and came up with the article seen on the enclosed image. 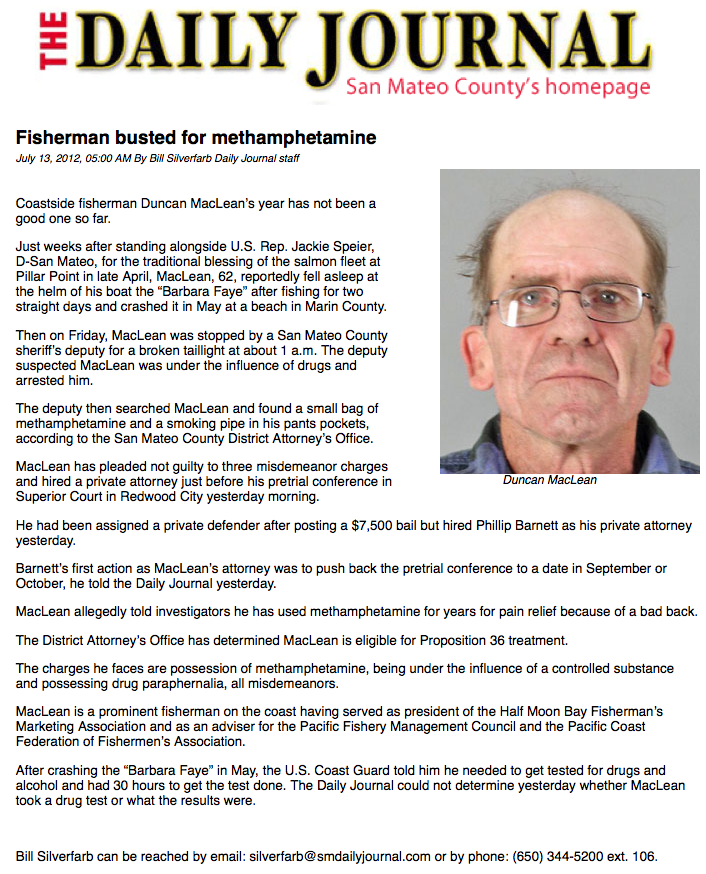 The other images are from the 12 May, 2012 grounding of the Barbara Faye at Limantour.

You know this man Mr. Grader.

Please do what you can to make sure he can never do this again.

We can find other ways to buy a salmon.

He can find other ways to earn a living.

Our planet cannot endure more of his irresponsible actions.

Clearly, piloting fishing boats is not his forté.

Thank you for your time. 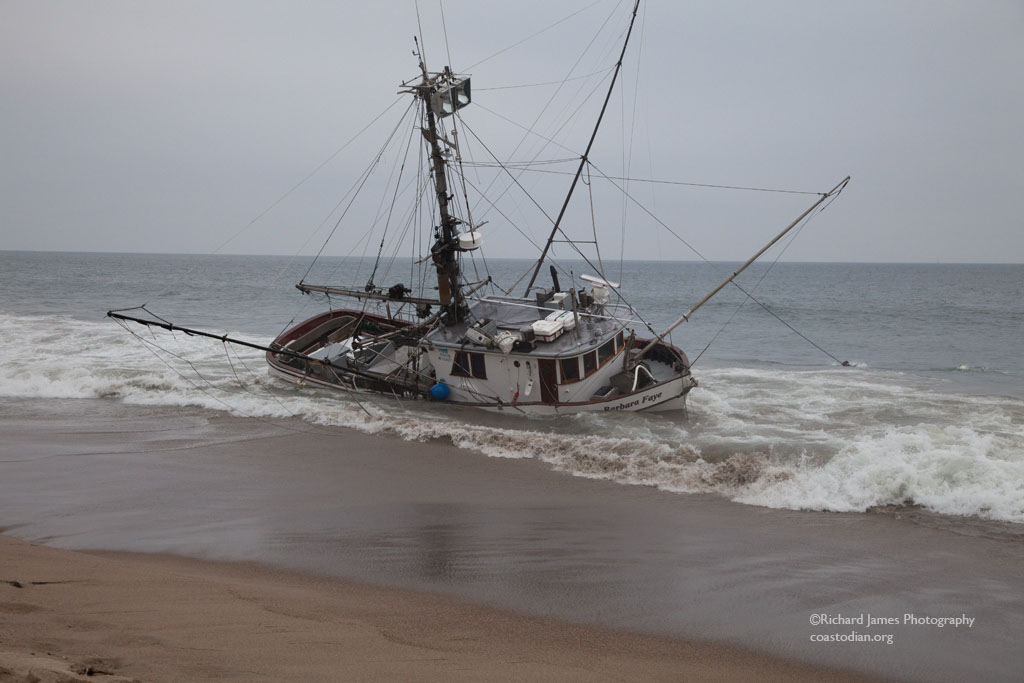 Barbara Faye, the second time Duncan crashed a boat by this name on Limantour beach. 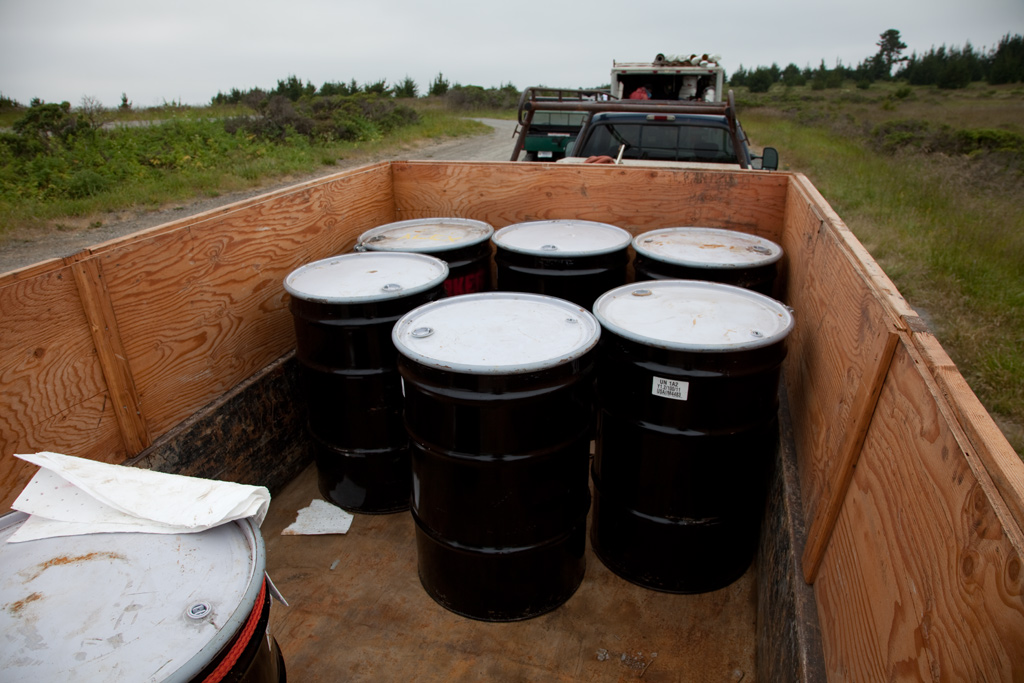 300 gallons of fuel that was pumped off the boat at great expense. 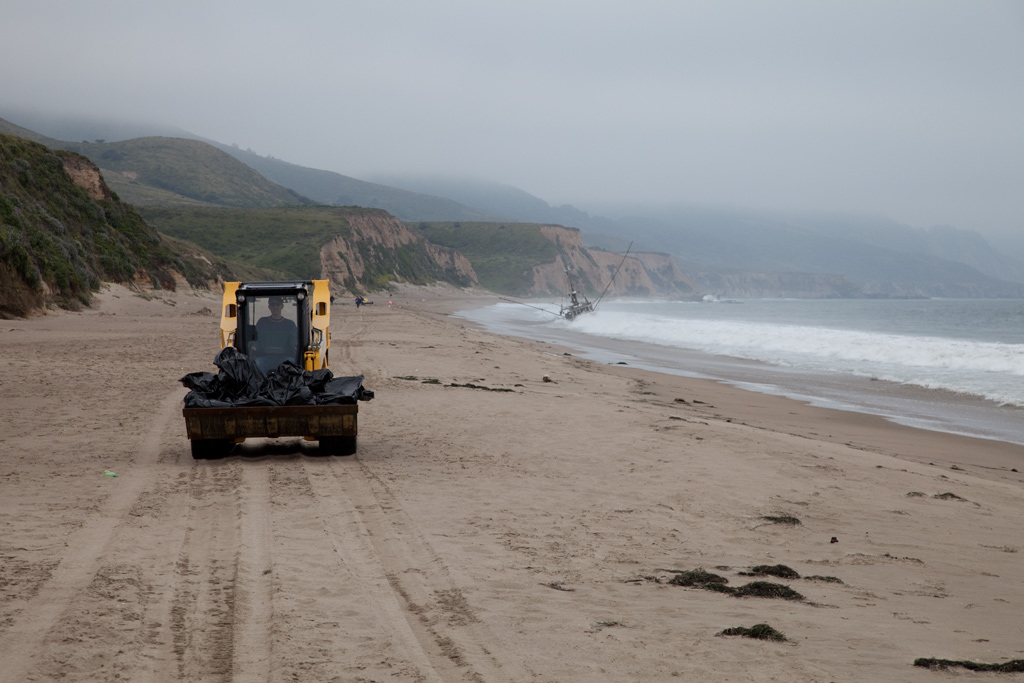 56 king salmon being hauled off the beach. 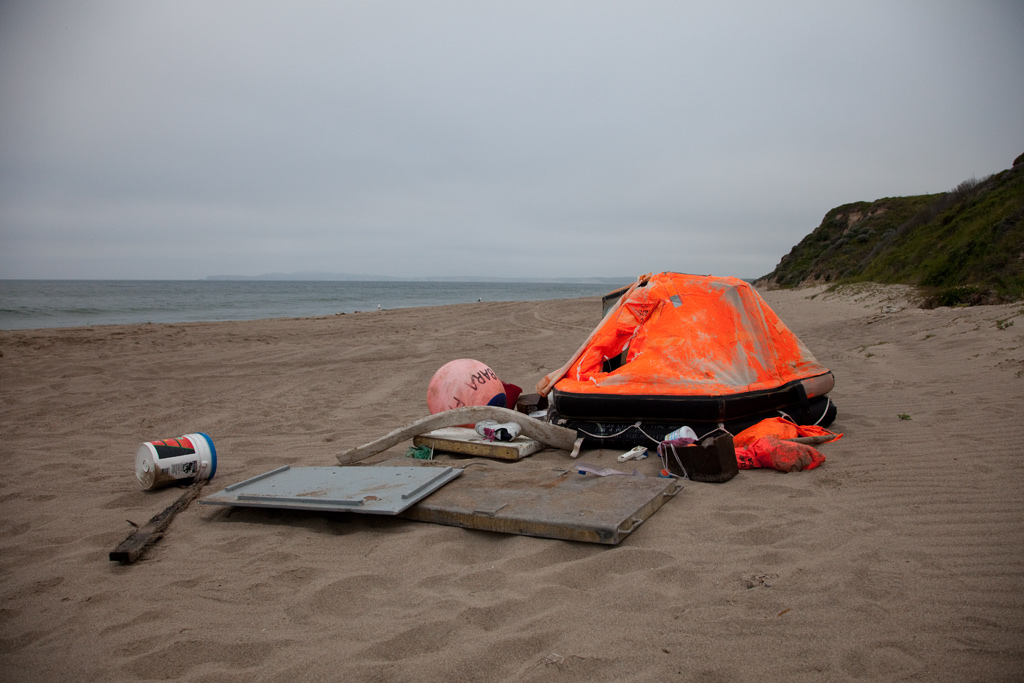 Some more images, these from Friday 31 August, 2012 as volunteers cleanup more from the wake of skipper Duncan MacLean.

And here is a link to many images showing the hard work citizens put in to clean up after Duncan. 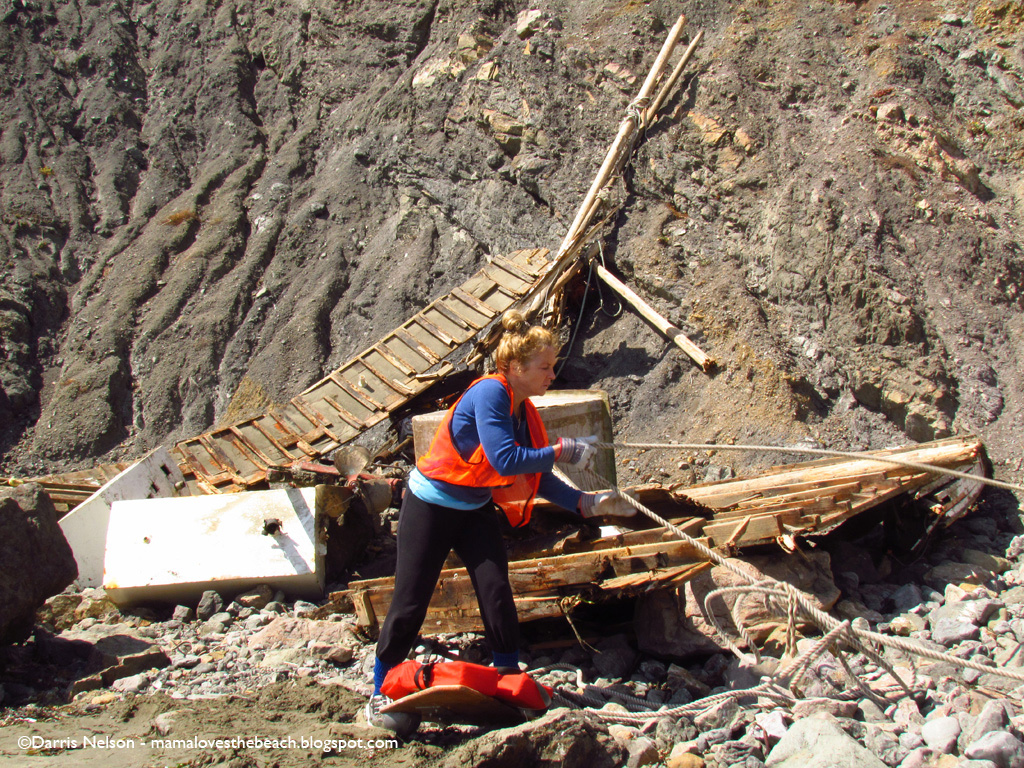 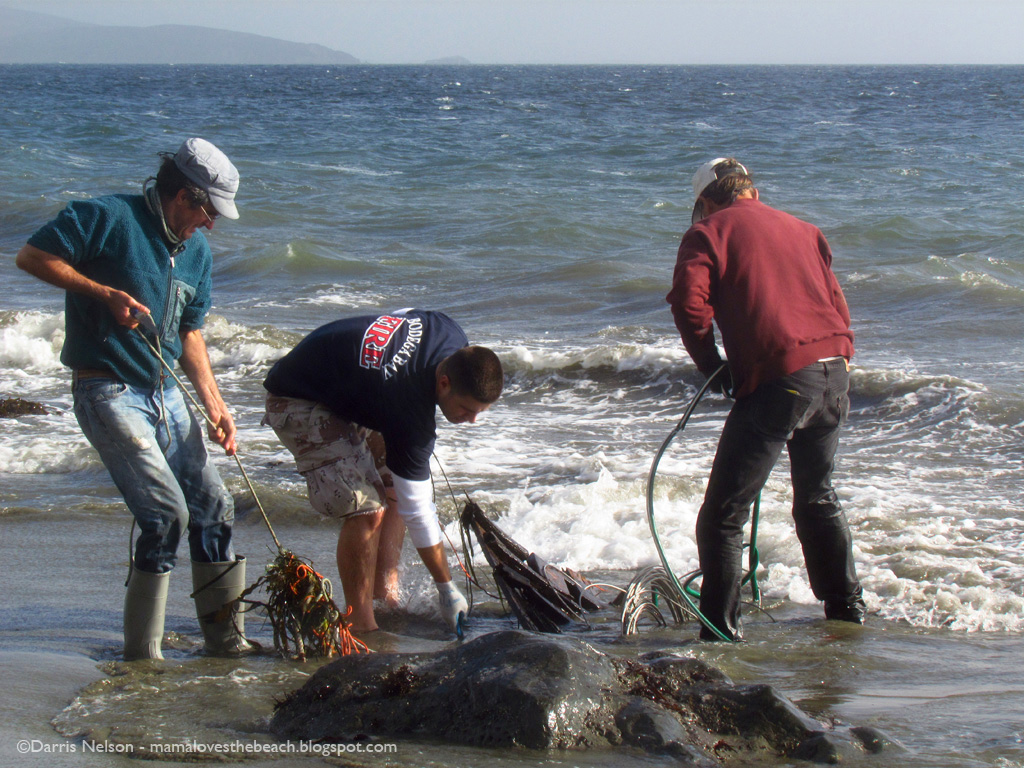 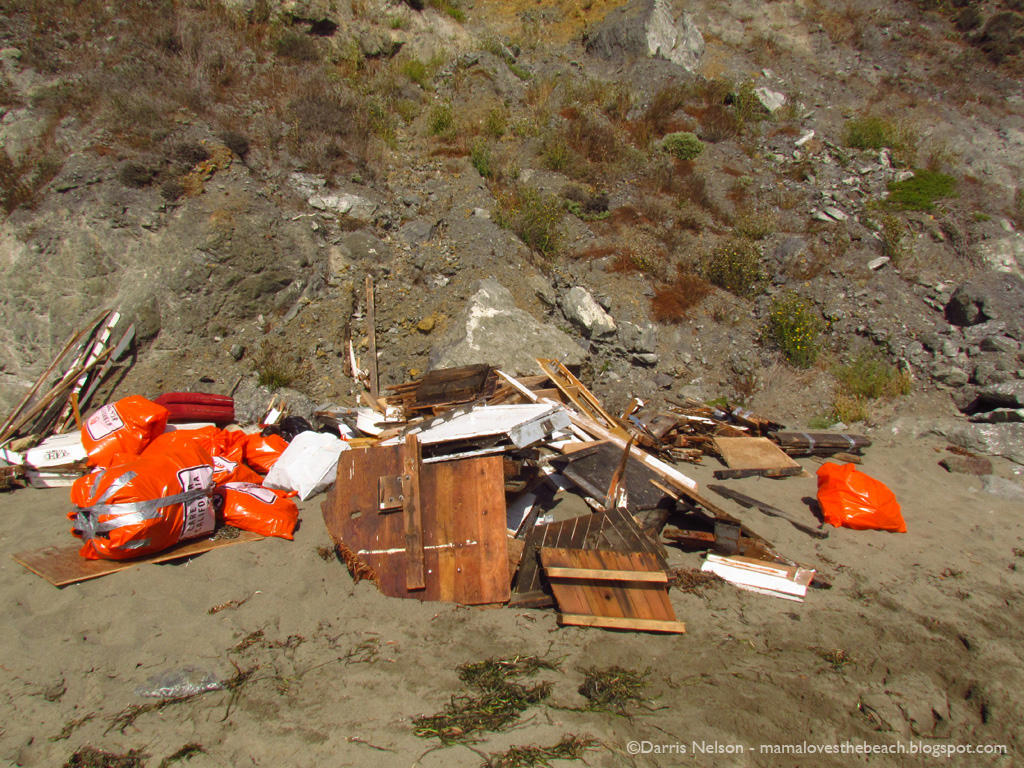 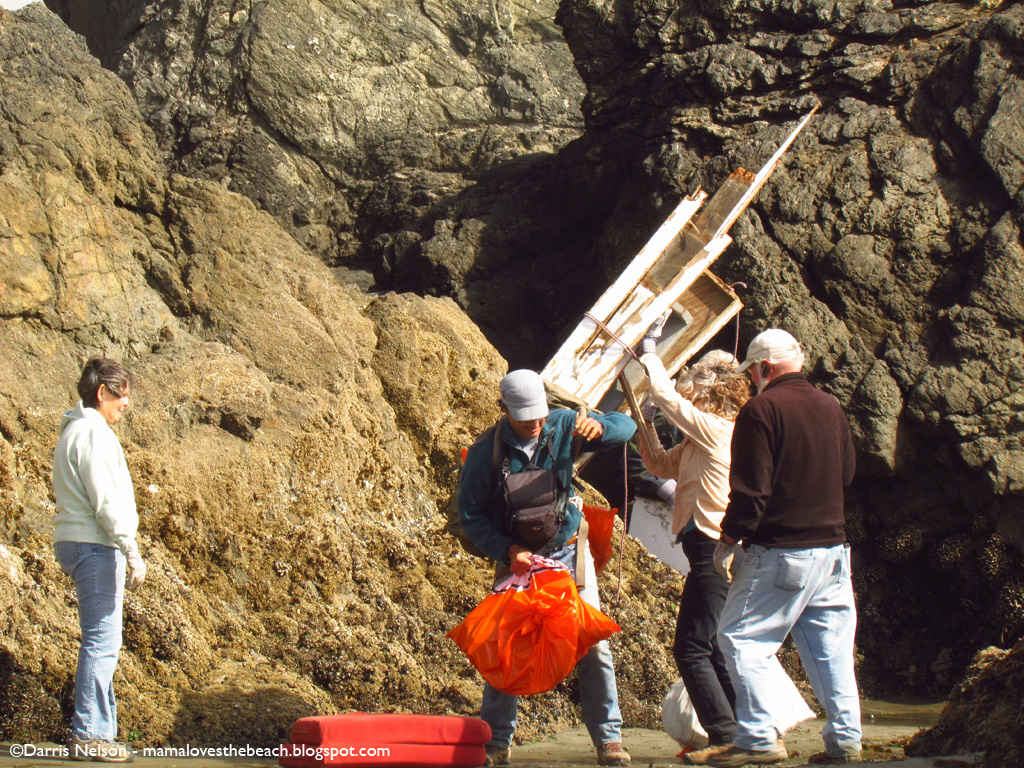