As some of you know, because I called you for help as the following unfolded,
today while picking up the beach I came upon an injured brown pelican. 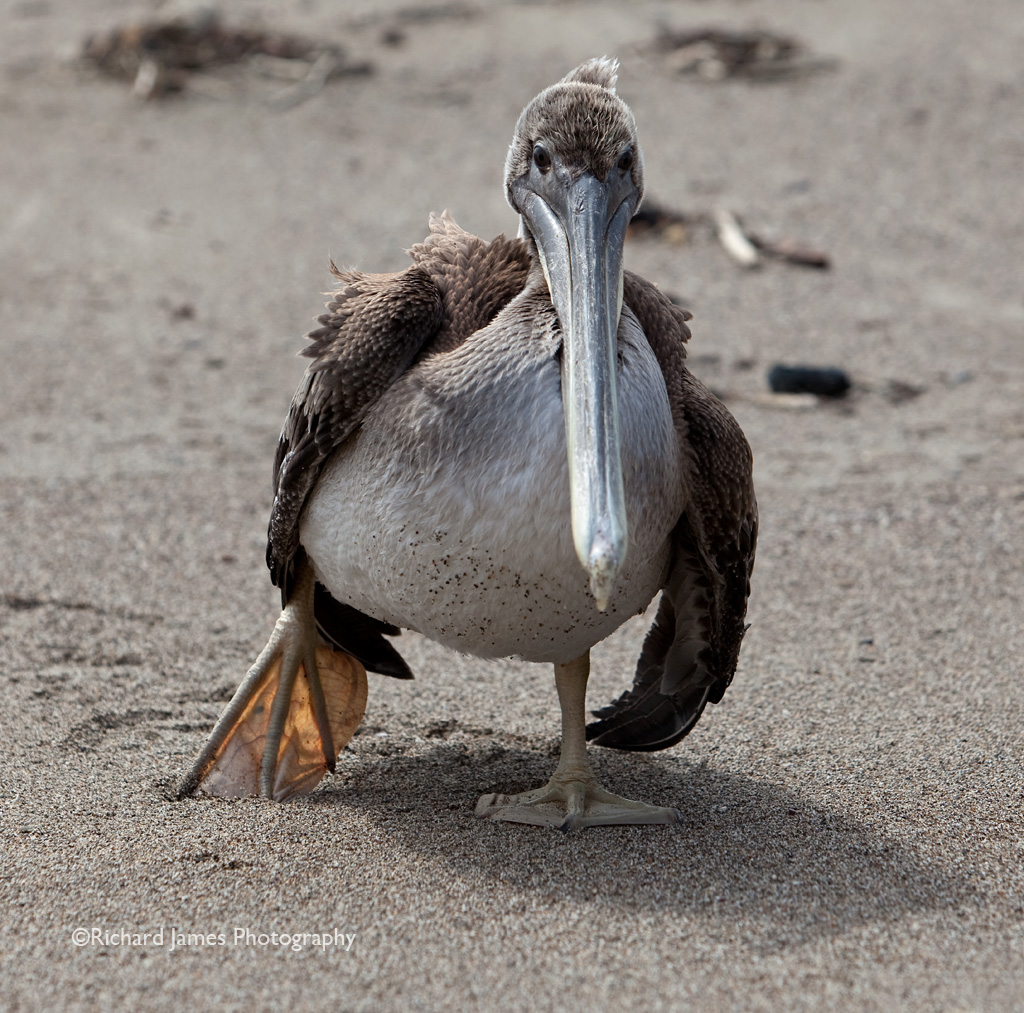 Both wings were drooping a bit as it shuffled off when I first came upon it.

Pelicans soar over the water looking for fish. When a fish is spotted, wings are tucked back, beak out straight, they dive down and hopefully scoop up a meal in their over-sized pouch. If they are not so lucky, they miss, take off and try again. If they are really unfortunate, they hit the surface of the water at the wrong angle and break a wing or two, or their neck. 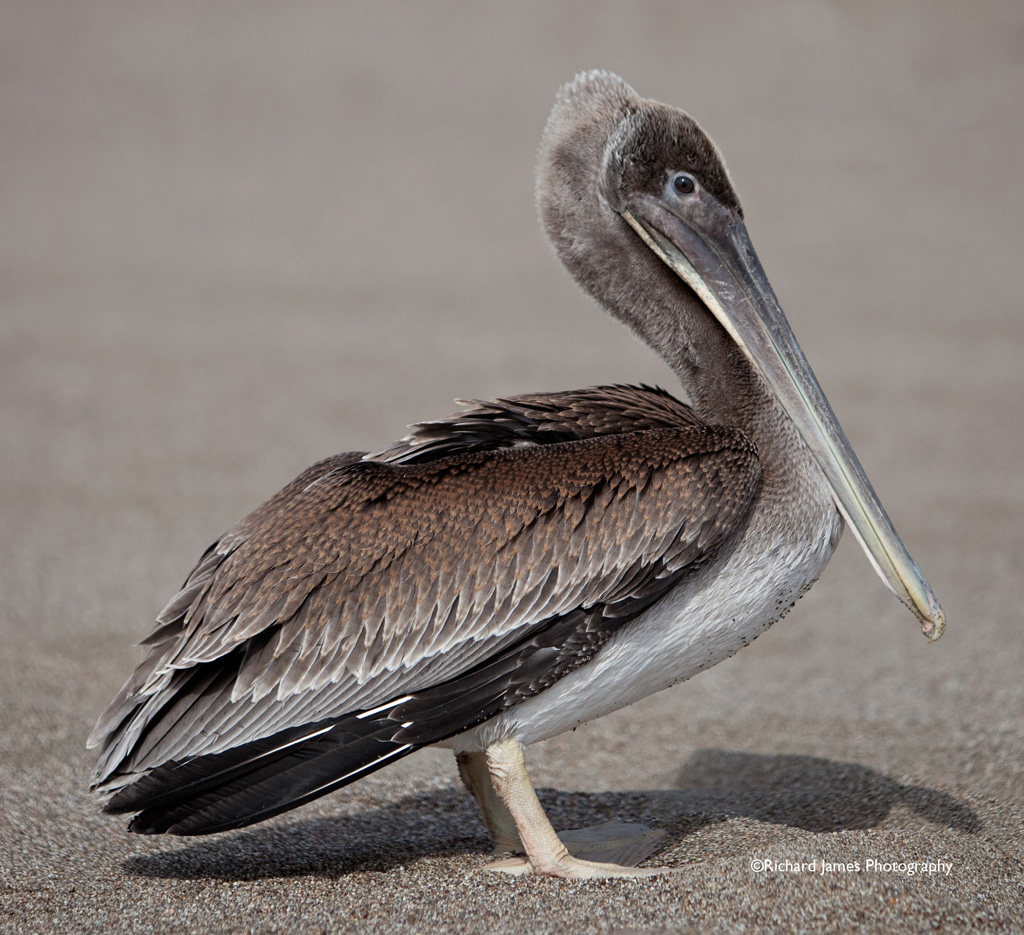 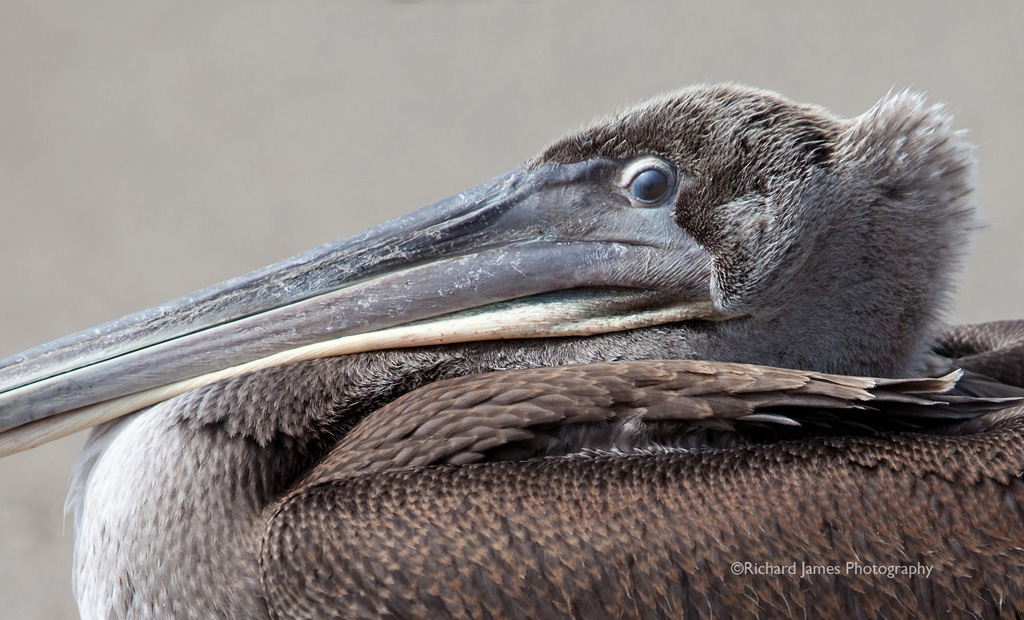 This bird was dry and other than the dangling wings (which I believe were broken) looked just fine as it eyed me crouching 30 feet away, admiring the gorgeous lines and feathers. I dropped my bags of trash, sorted out my camera gear and crawled around, awed by the beauty of this enormous bird and recorded images. After shooting pictures of it for about 15-20 minutes, I asked the bird out loud if it wanted me to leave it on the beach or get help. Without hesitation, the bird walked 10 feet towards me and stopped in front of me, staring, blinking, waiting it seemed.

I stashed the large debris I had collected above the high-tide line behind a large log and stowed my camera gear for the hike out. I pulled out one of the large white bags from my pack that I use to hold litter. After straightening the bag so I knew where the edges were, I stood up and eyed the bird before me. I’d have to move quick to secure it.

Up til now, the bird had been very docile during the photoshoot. Now, as I quickly strode towards it, I presented the biggest threat it had seen from me and raised both wings up high and opened its’ razor sharp beak. Closing the distance between us rapidly, I gently draped the entire bird, wings, sharp beak and all within the bag and closed down on it.

Carefully I tucked the wings into their natural closed state. With wings secure, I made sure the beak was closed and wrapped my hand gently around it, then tucked the bird under my right arm and walked to pick up my small bag of plastic rubbish.

Hmm, now to get to my car with a very large bird under my arm.

After walking, occasionally stooping to pick up trash and re-cradling Sparky as I decided to call this bird, I reached Ben’s place. All the way down the beach, Sparky was quite relaxed under my arm, hardly moving. Only when I turned away from the sea to scale the bluff did it become active and struggle under my arm, trying to free itself.

Looking up towards the house, there was Ben, Pat and their nearest neighbor Ernie Spalleta at the bench having a beer, it was Memorial Day weekend.

As I walked up, Ben called out my name to see if it was me, I said yes and that I had a favor to ask.

I told him what I had under my arm and asked for a ride to my car.

He instantly got up and said sure.

Hos tiny dog hopped into the pickup with me as I sat down and sniffed my bundle. Sparky was none too happy about this. I suggested to Ben we leave the dog behind. He handed it to Pat and off we went down the long drive to Sir Francis Drake Blvd.

On the short ride to my car, Ben related that in days gone by, pelican feathers were coveted for fishing lures called “hoochies” and people would often shoot them to get these sought after plumes.

Back at my car I thanked Ben as he drove off and re-wrapped Sparky and packed my things. The bird rested on my lap so I could secure it while I drove back to my place. Sparky left several chalky white deposits on my lap, seat and center console. For a bird more at ease soaring inches off the waves, riding in this noisy metal box was likely not all that comforting. My several calls to friends in the know led me to a place where they rehabilitate wild animals. I hoped they would be able to help out this gorgeous bird. Tiny mites crawled all over me.

Once home, I placed Sparky in a large plastic tub I found on Kehoe last year, covering it with two plastic screens I had also found washed up on local beaches recently. I weighted it all down with a large piece of anthracite I found 2 years ago and got in the shower to wash the bugs off. Being sure to strip my bug infested clothes off while out on the deck where they still sit.

I checked on Sparky as I left for the event I had to attend and there he/she sat, quite calm.

After returning I have checked 2 more times to see the bird has moved to a new position each time and seems to be resting peacefully.

I’ll drive to Wild Care in the morning to drop Sparky off and hope for a speedy recovery.

Above is all I wrote that evening.

I continued to check on Sparky every 20-30 minutes. Each time all looked fine as it crouched in the large tub acting as home until I could get it to the bird care place the next morning.

At 12 midnight I came out to find Sparky was lifeless, head slumped down on the floor.
I reached in and found the body still warm, rigor had not set in.

Although not surprised, I was still sad. I had hoped to get this bird to where its’ wings could be mended and it could be released. No more.

I later learned that large birds like this, once they break wings, can never be released to the wild. So it is probably for the better. No animals belong in a zoo. 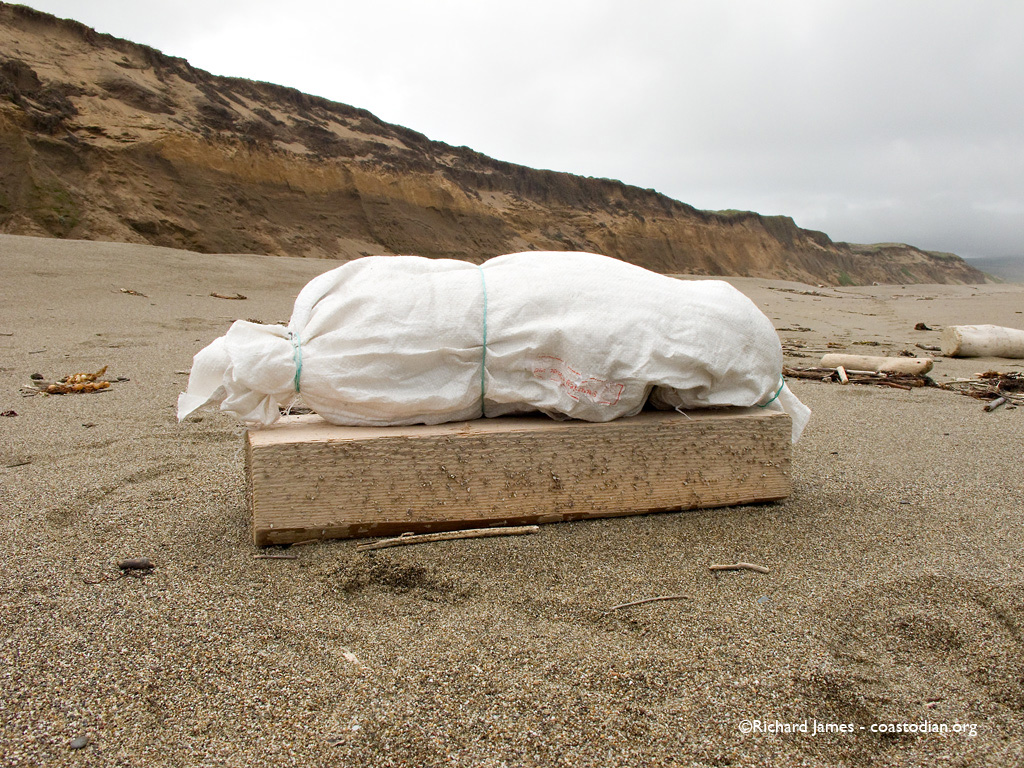 The next day I wrapped the pelican body in the same bag as before and hiked back to the spot I found it. I unwrapped it and left it for the scavengers and elements. 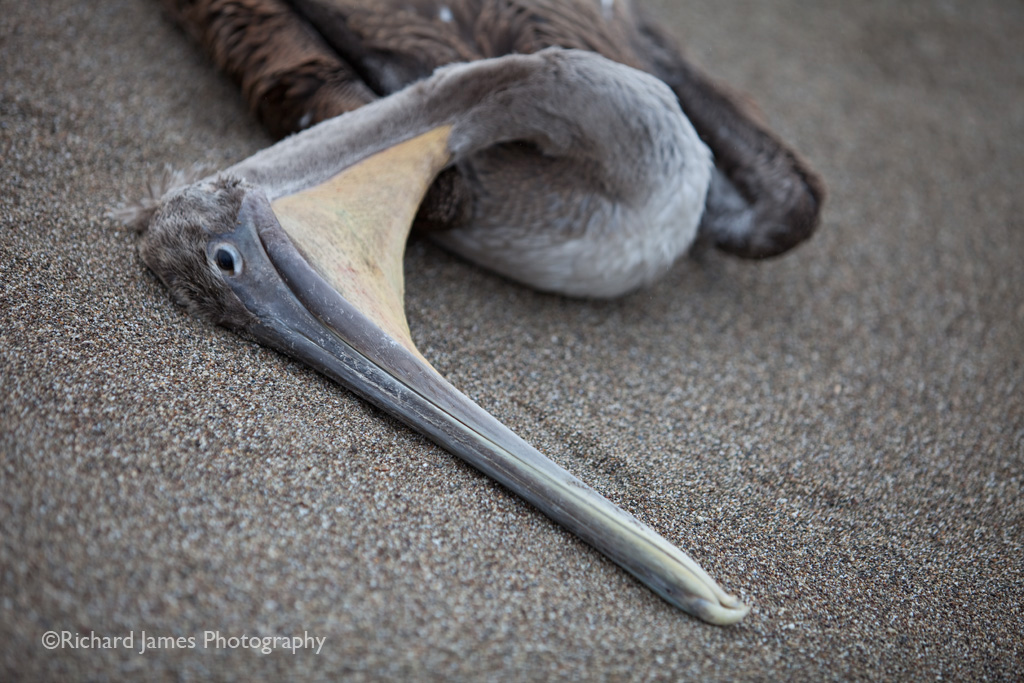 The next day I returned to see what had become of my friend. 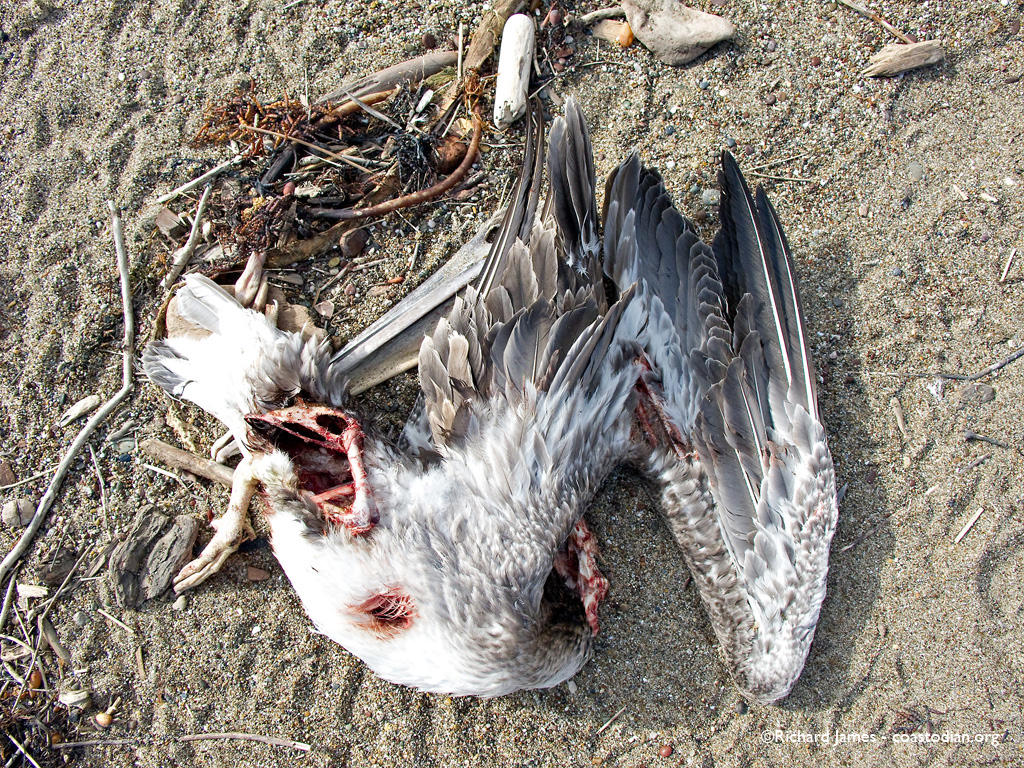 Each evening and morning, raccoons, skunks, coyotes and bobcats roam the beach in search of food.

Nature is so beautiful, no lies, no hesitation, no waste, no greed.

Below are some images of brown pelicans from over the years. Click on an image to see it larger. 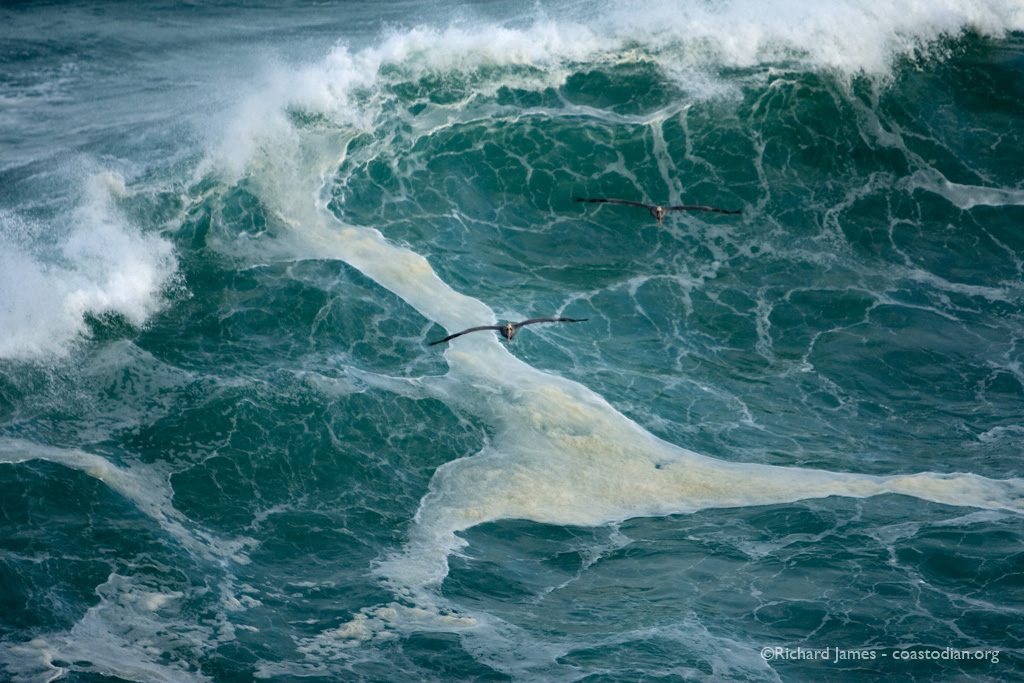 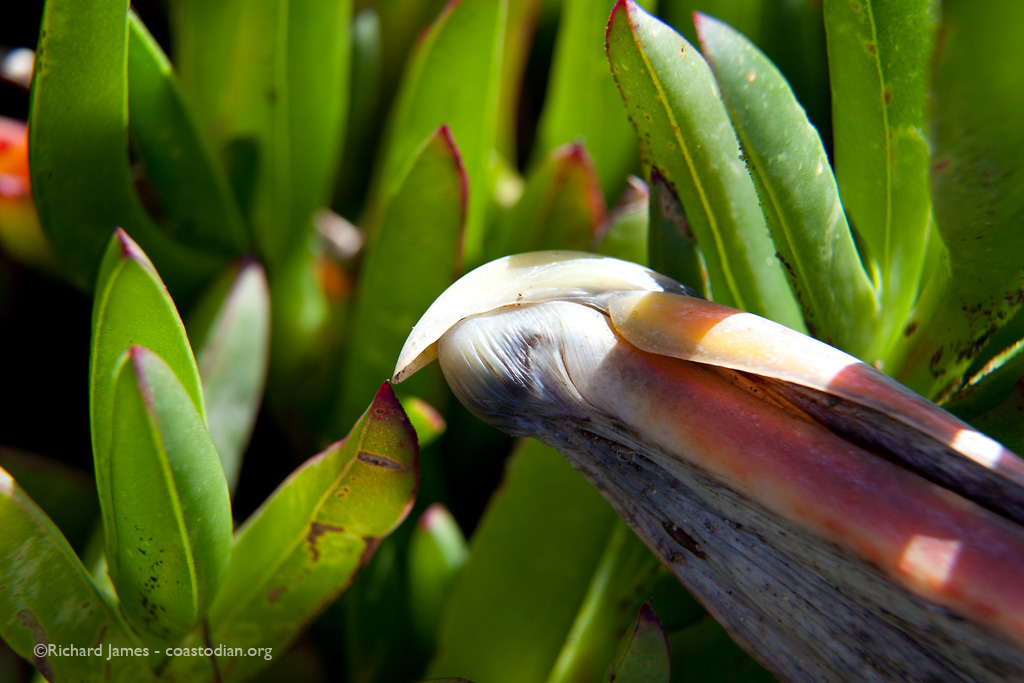 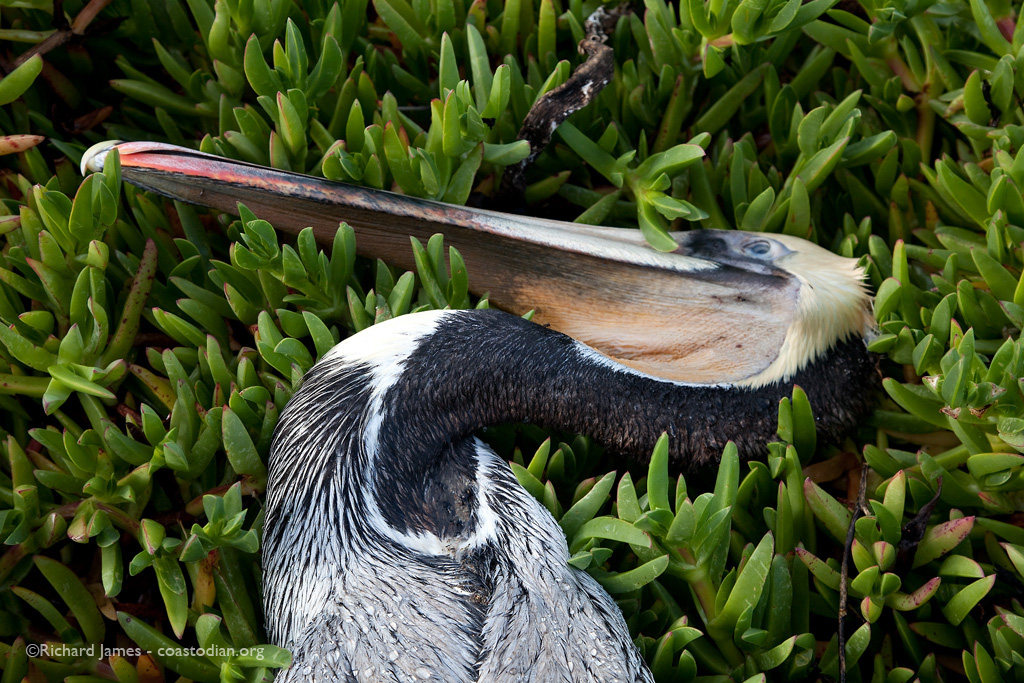 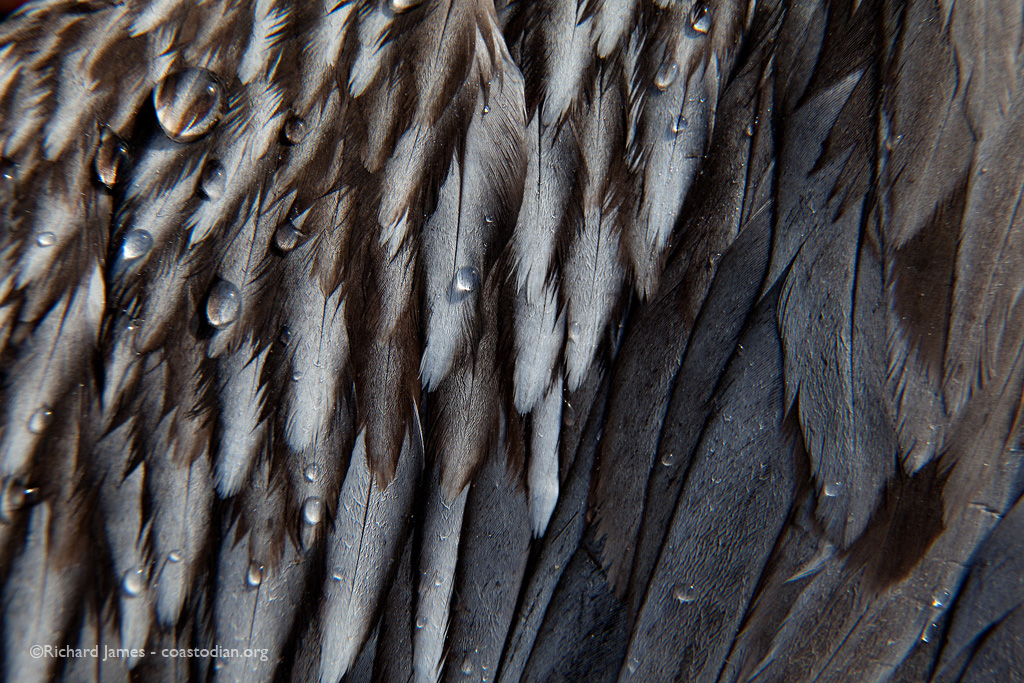 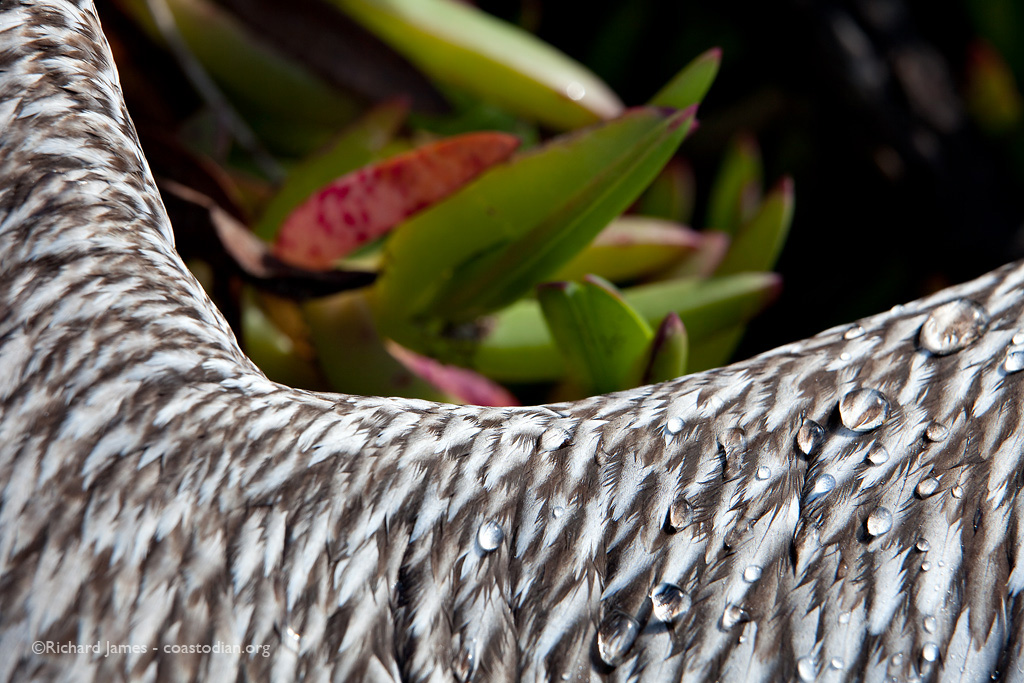 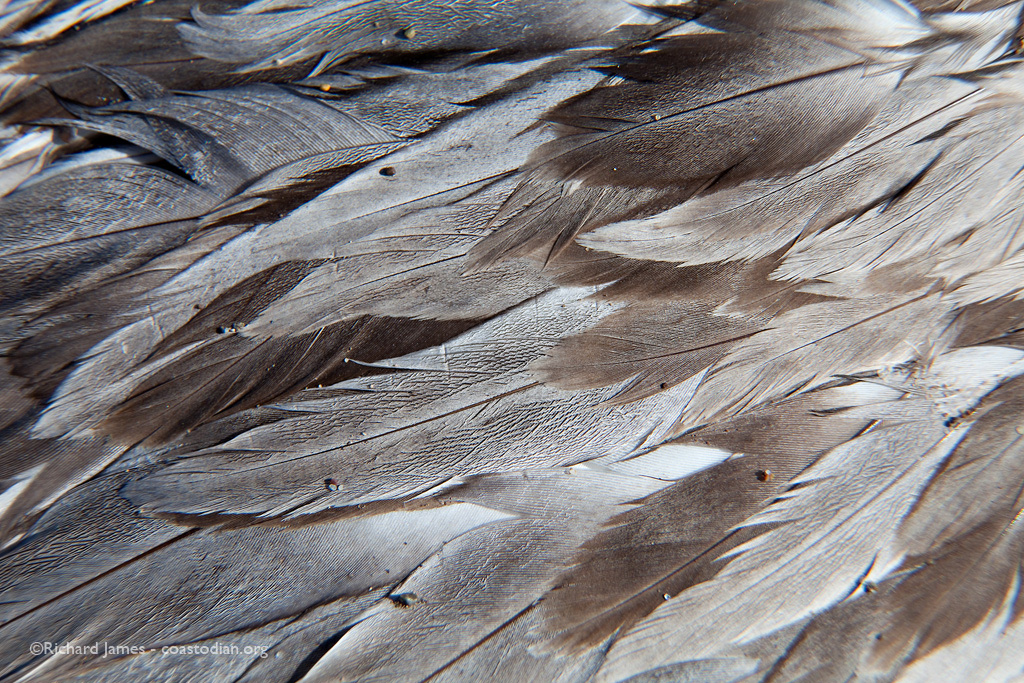 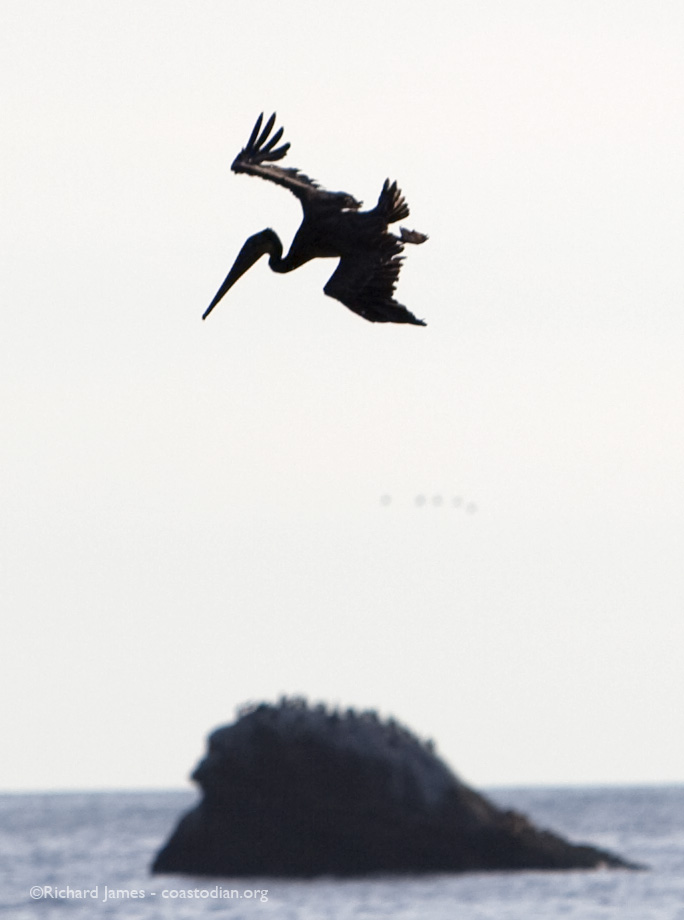 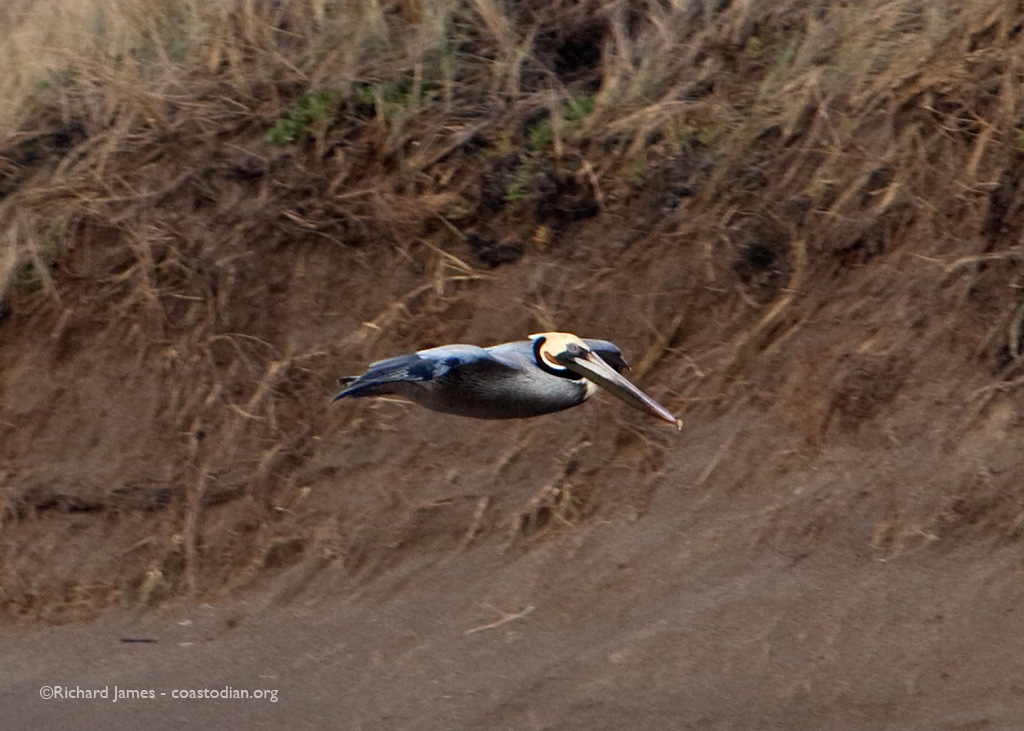 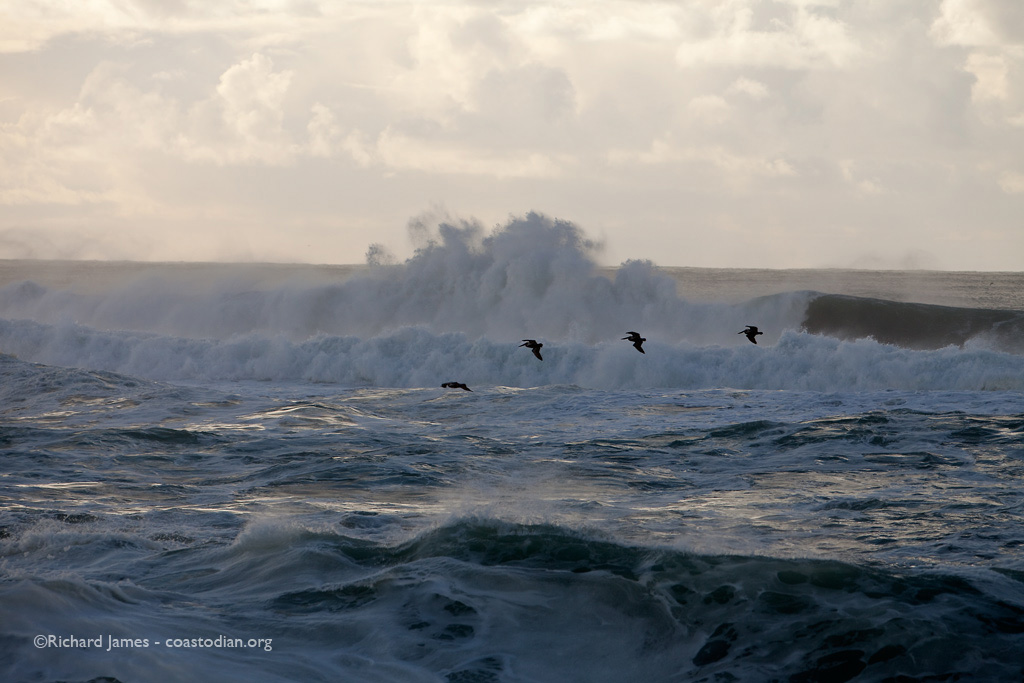 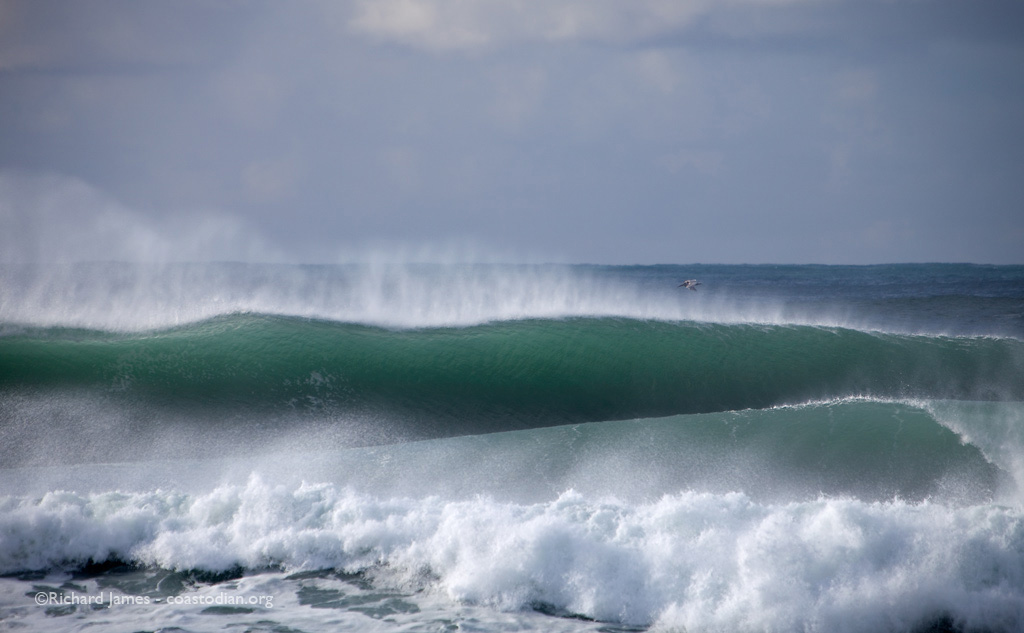