Click on the words “Why care about wild salmon” above to see this post with a related header image.

Then, someone with dollar signs in their eyes and an MBA from some well-respected business school comes along and figures out how to capitalize on the situation, and screw things up even more.

Several weeks ago I was diving for abalone along the northern coast of California, an enjoyable, exhausting activity, even when the ocean is calm and visibility is good. I was knackered after two hours exploring and retrieving a few abs and had hauled myself out on the rocky shore to rest a bit before heading back to the car.

As I drug myself from the surf on hands and knees, I looked to my left, just above the lapping waves and saw something strange, something out of place. It looked like a salmon head, resting on a large rock. Pffft, no way could a salmon head be sitting on a rock here I thought. Removing my mask I looked again. Sure enough, there was a salmon head, perched on a rock with something bright and flat under it. This was not a coho or chinook salmon either. As I crawled closer I could see it was an Atlantic salmon, like one sees in the market these days, perched on the shore of the Pacific Ocean.

I picked it up and found that it had what appeared to be a price tag hanging by a thin plastic thread off the opercle (cheek). What the hell? I thought to myself.

Then I read the tag and was even more dumb-founded. It had a QR code on one side and what appeared to be a brand on the other. Holy Jesus I thought, Monsanto is raising fish that are already priced.

I packed this oddity into my gear, crawled back into the sea after a rest and swam back to my things, then drove home. 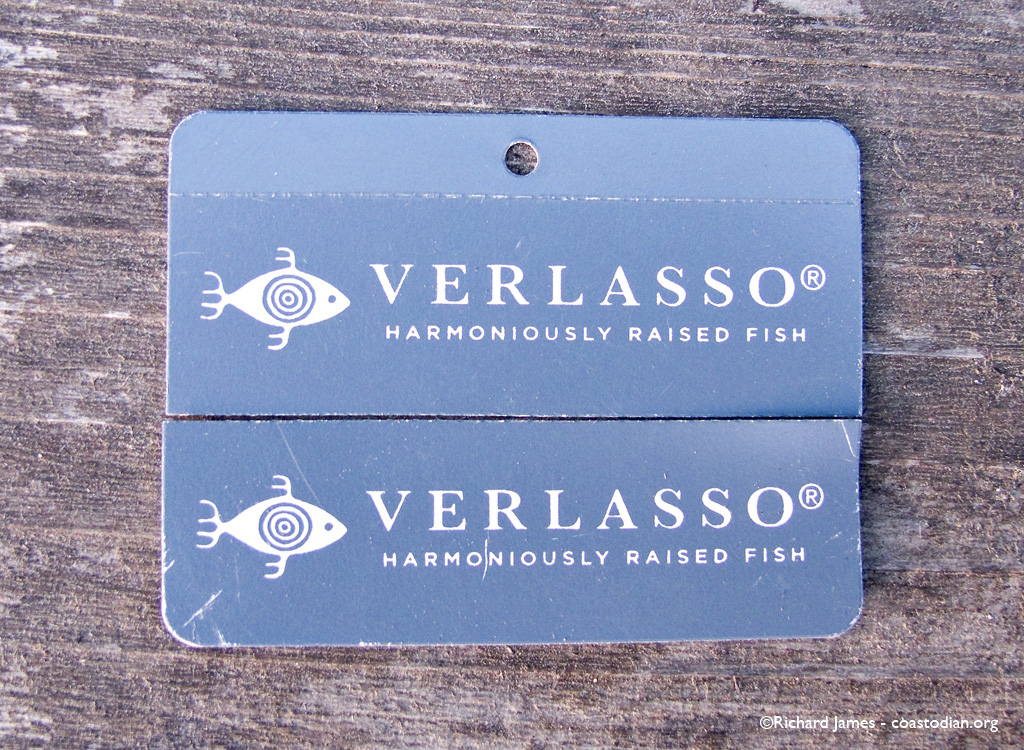 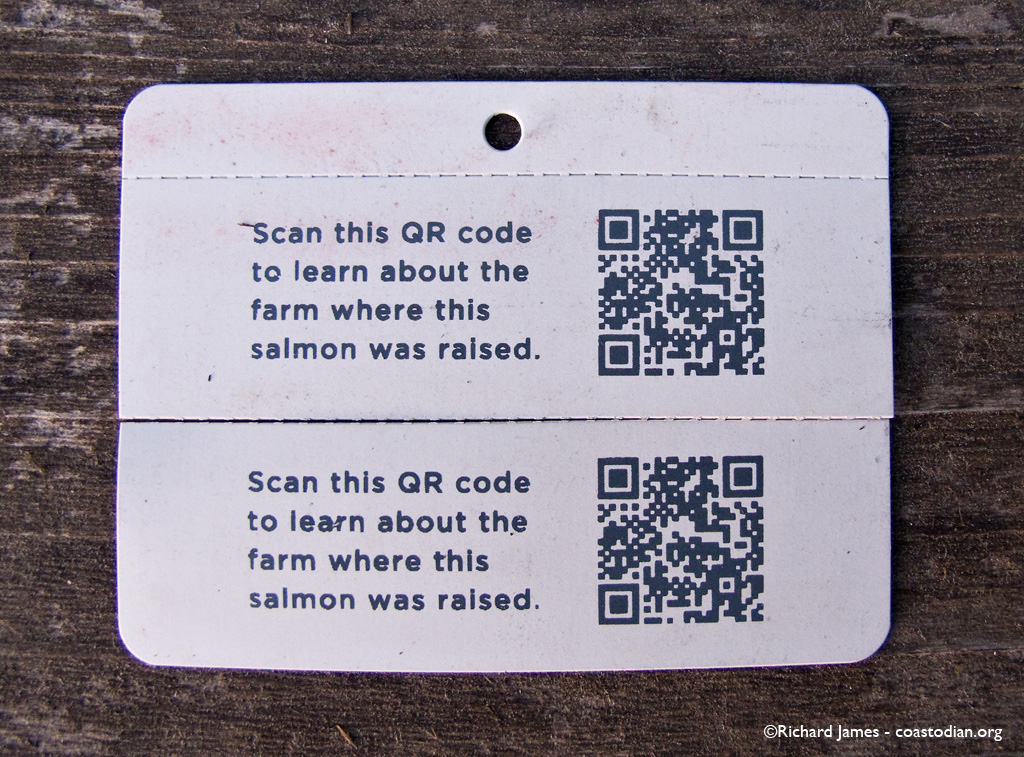 Once home, I looked up the brand on the internet and found that this fish had been raised in a pen off the shore of Patagonia, over 5000 miles south of where I found it.

Furthermore, I found that it was raised at a place touting itself to be “Raising salmon in harmony with nature”. A little more sleuthing on this website and I found that this fish was likley sold at a market not too many miles from where I found it. A gull probably plucked this morsel from a dumpster, flew off to enjoy some easy grub, then got distracted or some such thing.

These people at Verlasso are working with the likes of AquaChile and Dupont to turn out food for people to eat. I don’t know about you, but when I think of food, DuPont is probably the last name that comes to mind. Think dynamite, teflon, tyvek – NOT food.

So yes, we humans have screwed up hundreds, if not thousands of perfectly healthy salmon runs the world over. So much so that enterprising folks like Verlasso are going to save us from ourselves by farming fish that are in harmony with nature. Mind you, these fish have done pretty damn well on their own until we got all clever and greedy on this dang planet. But these are smart people, with degrees and training and know-how.

Have a look at their website, it has lots of nice cartoons showing how to grow fish in harmony with nature.

How many of you thousands of readers (snicker) know about the unfolding disaster called The Pebble Mine up in Alaska? 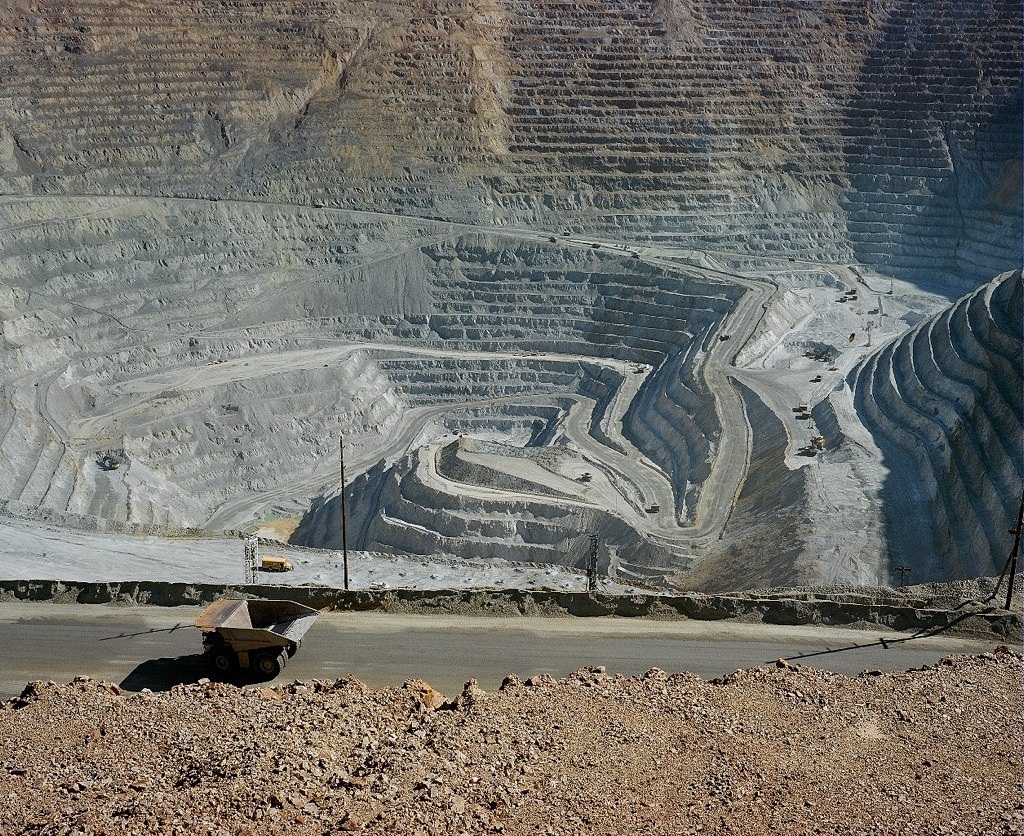 The proposed mine will be 3 times the size of the Kennecott mine shown here. Image borrowed from https://fishermenforbristolbay.org/pebble-mine/

A perfectly good sockeye salmon run is at risk of being destroyed by a bunch of greedy business people interested in mining copper, gold and molybdenum and other things MUCH more important than some stupid fish.

Read about the Pebble Mine here.

What if we left that copper in the ground?

A healthy sockeye salmon run would create salmon in harmony with nature, all on it’s own.

Greedy business people the world over would not further threaten wild salmon runs by playing god as they attempt to grow salmon in harmony with nature. We don’t need more food on this planet, we need less humans screwing things up.

1 thought on “Why care about wild salmon? Copper, we need more copper and molybdenum!”