13 Dec 7:40pm – I just got word that the fur seal known as Sparkle has died. She was just too small and undernourished to make it.

I just read that the sex of the seal has been determined, female.

NOTE: I was at an art opening at The Marine Mammal Center tonight (29 Nov) and learned a little more about this fur seal. It weighed a diminutive 4.5 Kg, the tiniest of the 7 fur seals they have presently. In addition to being severely underweight (below birth-weight), it is also very dehydrated and likely has pneumonia. There is a good chance it will not survive.

Big storms are happening in California which means litter season has begun.

I went out to walk along Drakes Beach this afternoon to see what the strong southerly winds had pushed ashore.

While walking back to the car, this little one hauled out right in front of me. 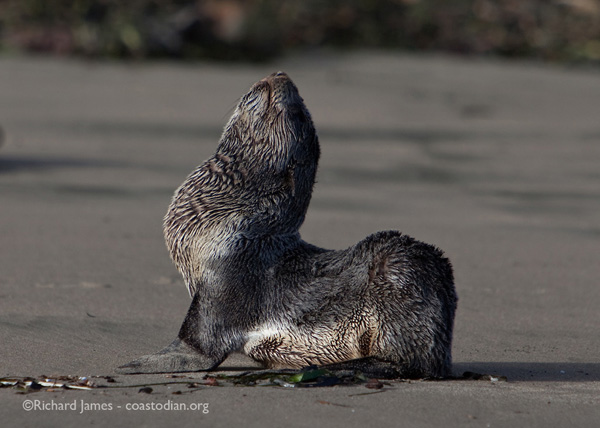 As tired and emaciated as it was, I surely looked too much like a predator, so back in to the roiling surf it went.

Quickening my pace so it might haul out behind me and feel safe enough to stay, I stepped over kelp, logs and foam, careful not to trip. Thankfully it did haul out again and headed for high ground.

I only had a point and shoot camera, so I stayed a good distance away and watched as it shivered and groomed. It was exhausted and I imagined happy to be out of the pounding surf.

Over the past few years I have packed out the dessicated bodies of two dead Northern Fur Seal pups (and one Guadalupe Fur Seal). This was the first live specimen I had ever seen. I really wanted good images, but my main camera was an hour away.

NOTE: I am on the collecting permit of the California Academy of Science. Because of this, I periodically recover birds or marine mammals deemed of interest to the Cal Academy. Please do not remove animals from the beach, ever. If you see a live or dead seal, note the location (GPS waypoint is best), size, species if you know it, condition and call the dead animal hotline at Cal Academy (415-379-5381) if the animal is dead. If it is alive, call the Marine Mammal Center stranded animal line at (415-289-7325). Never pick-up a pup that is alone. It is likely the mother is away feeding.

Scooping up the piles of plastic I had cached on my walk out, I hurried back to the car for the drive back to get my long lens and fast camera.

An hour later I was back with 400mm of lens and tripod to allow me enough distance so as not to worry the animal as I ogled with my binocs and clicked the shutter. It had moved out into the center of the beach, perhaps the falling rocks from the cliff above made it think twice about being so close to the cliff. The dropping tide created a vast, flat and mostly dry place to curl up. 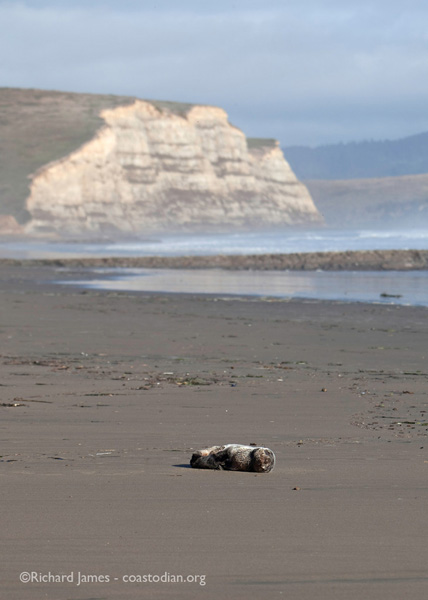 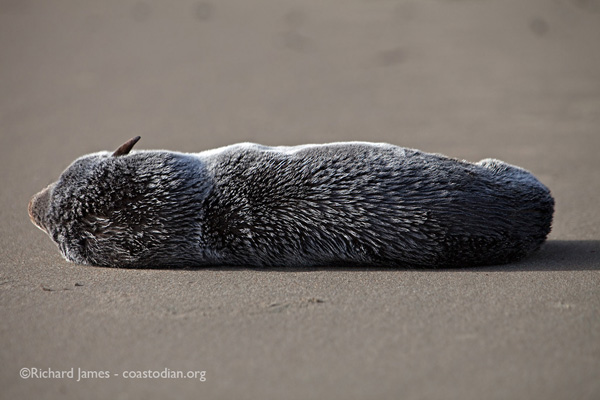 As I maneuvered and fiddled with my tripod, microphone and other equipment and shot images, others took an interest in this furry bundle of protein sleeping on the beach. A vulture floated by and peered down. A raven swooped overhead and lit on the cliff over us, wondering if this morsel was ready to consume. A very large gull sauntered up quite close, I thought I might be able to record an interesting exchange as they got to know one another. But the gull looked at me and backed off. It did not know that I eschew gull. 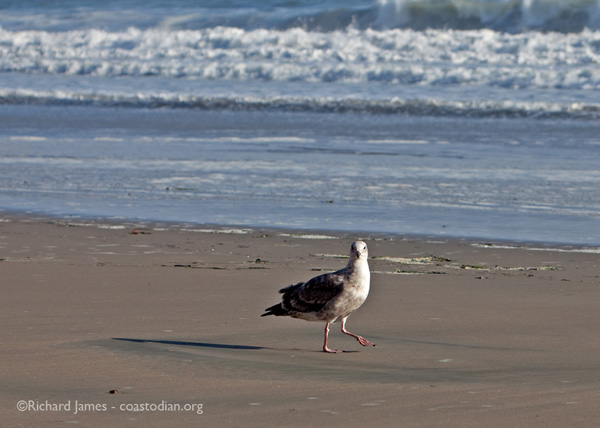 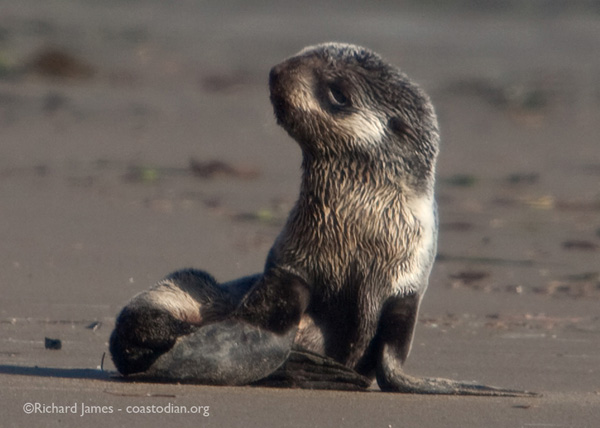 Not the best image, but it does show nicely how to distinguish a Northern from a Guadalupe fur seal. The fur on the fore-flipper of a NFS stops far from the tip, as you see here. The fur on a Guadalupe continues down about half way to the end and has a less straight line where it ends, more ragged. 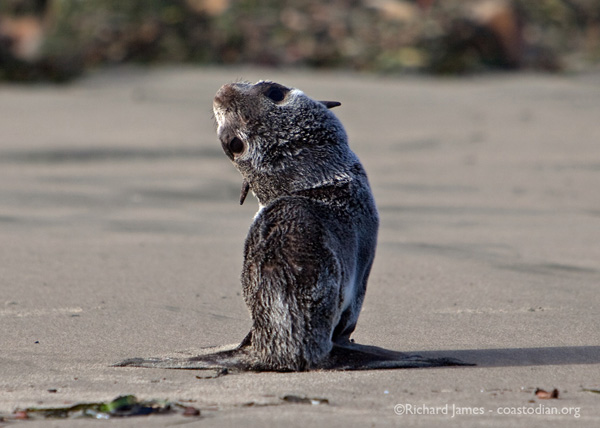 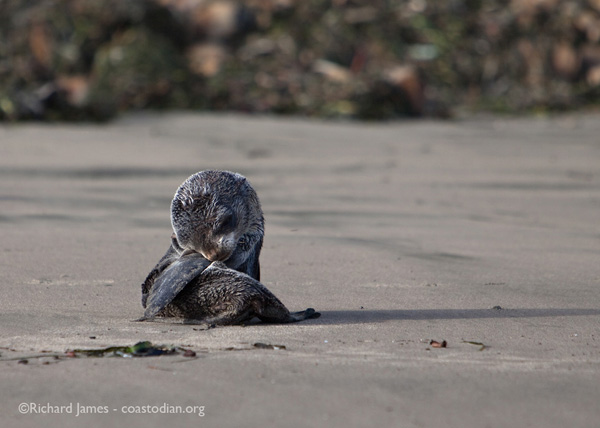 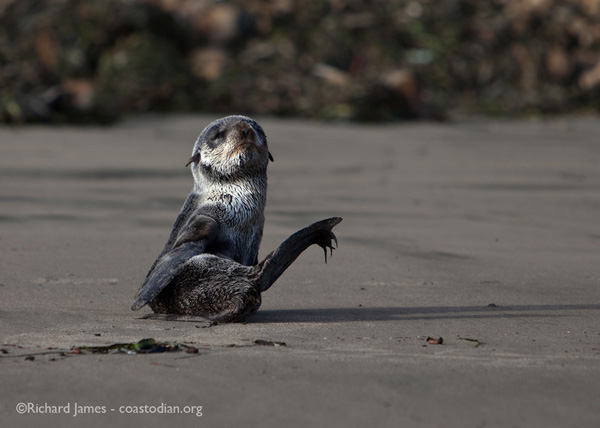 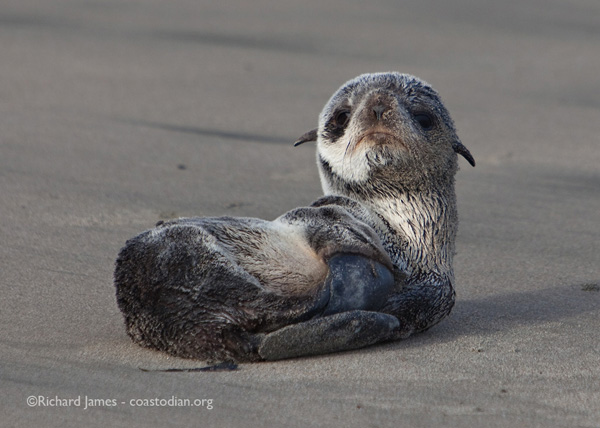 After an hour or so of watching and clicking, I packed up and headed back home.

On the way back, a few phone calls later, after they concluded that I did indeed know the difference between a California sea lion and a fur seal, a person from The Marine Mammal Center was on his way out to recover it.

He was going to arrive after dark and his flashlight was not working. I offered to come along and show him where it was and I had several bright lights. He was happy to have me join him.

After parking, we carried a small dog carrier with us as I lit the way on our walk to where the seal was last seen. We were on it much sooner that expected as it had moved a 100 meters or so. We dropped the carrier and Doug set off towards the rapidly fleeing seal. Up close it it was even smaller than it appeared while I photographed it.

Doug estimated it to weigh about 5 kilograms and to be about 2 months old. It was clearly emaciated, though still rather feisty.

Into the carrier it went and we carried it back to the truck. 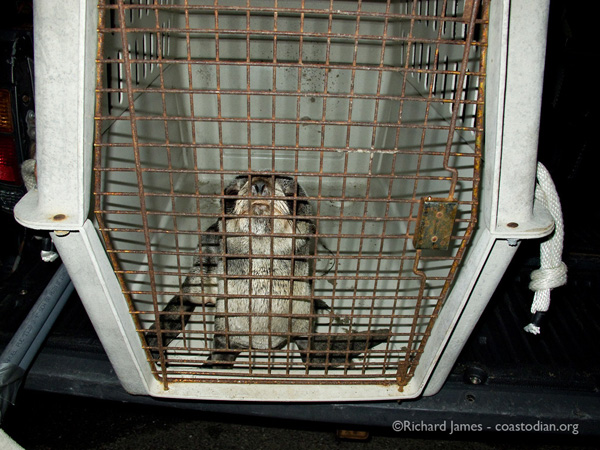 Sparkle, as this seal has been dubbed is likely just arriving at The Marine Mammal Center as I type this. It will immediately be fed via a tube the equivalent of Pedialyte to rehydrate it. Tomorrow it will be looked over by a veterinarian. Go here to see a list of all the animals currently being cared for at the Marine Mammal Center

If it recovers enough weight and is otherwise healthy, it will eventually be released to hopefully live a long and productive life.

Here is a a 3 minute video of my visit today with a Northern Fur Seal. My apologies for the intrusive banner across the bottom. I hope to at least be recognized as the person producing the images and videos when they show up all over the internet and in classrooms.