Click the words above “Jenner by the sea – Same as it ever was” to see this entire post.

Once in a lifetime may we all see such beauty as Drakes Estero at dusk, surrounded by hundreds of godwits. Serenaded by a single loon. In this respect my life is complete.

On the first day of 2015 I was blessed with the beauty of Drakes Estero sans mariculture. 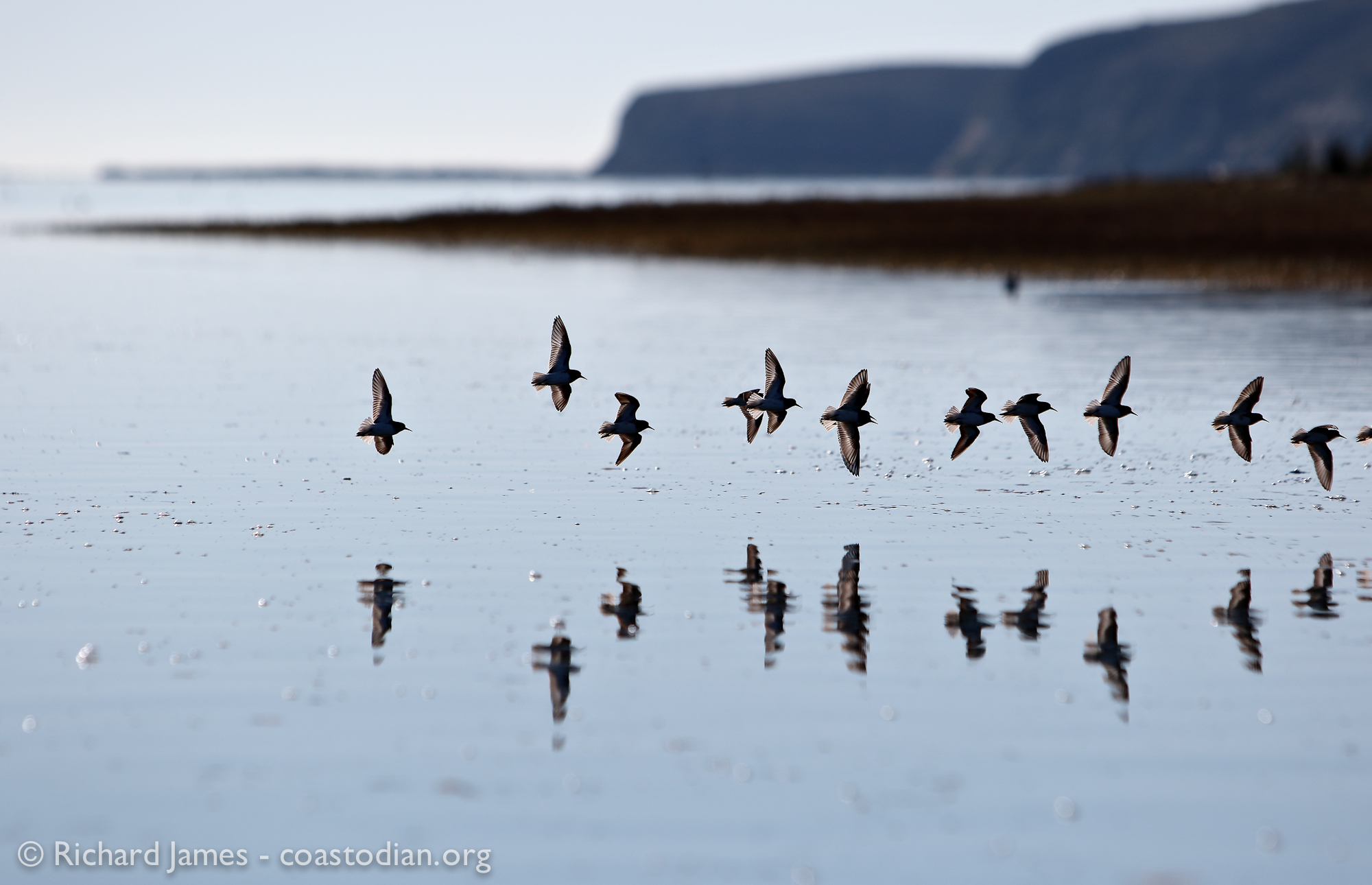 On the last day of 2015, I had the company of Dan Gurney, fellow boater and nature aficionado as we toured the estuary at the mouth of the Russian River.

This is a common venue for Dan and my first trip to these calm waters.

We put in at the boat ramp near the visitor center and made our way towards the mouth, careful not to venture out to the sea. Our boats and skills not suited for the crashing waves.

Besides enjoying the birds, seals and sounds, our destination was the beach north of the mouth, covered with driftwood and countless pieces of plastic, bottles and other mindless items. Inquisitive harbor seals swam close to us, noses in the air, inspecting us for food or threat, then silently sliding back beneath the cloak of the sea-surface.

We beach our boats, bags in hand we set off to the north, ready to return the scene to a more fitting state, free from out trash. Though we would later learn we had not pulled our boats far enough out of the rising waters.

Dan and I had previously met 2-3 times on Tomales Bay, he with a larger group of boaters, and I out walking the shores, filling my boat with trash, oyster farming debris and derelict drifting duck decoys. This was the first time he and I had boated and walked the shore, intent on cleaning up the place.

Instead of 10-15 minutes and back in the boat to paddle up to Penny Island for a bite to eat, we spent the next 90 minutes gathering foam bits, tennis balls, plastic and glass beverage containers and this lone steelhead. 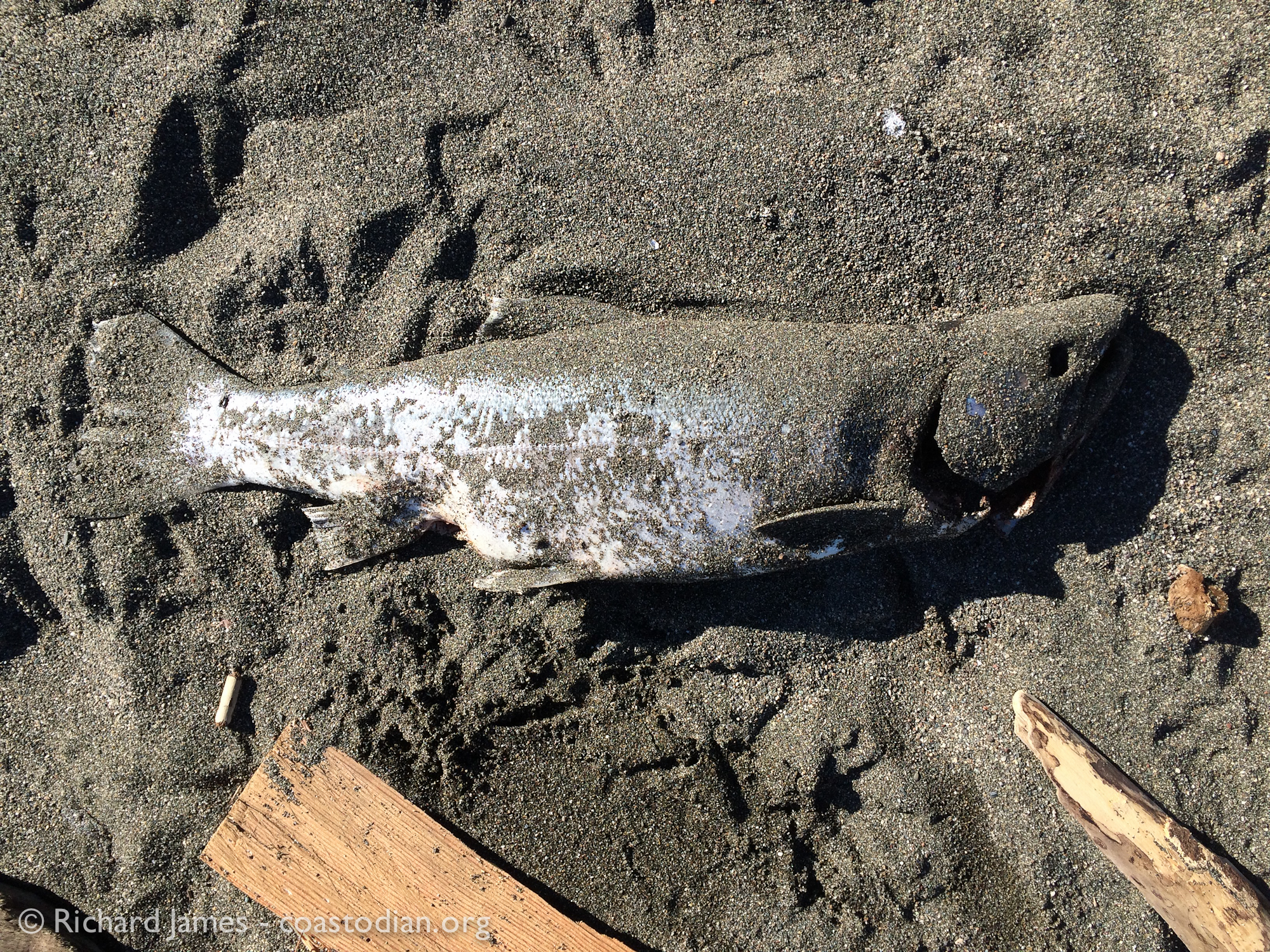 A large meal, unnoticed by gulls, vultures and eagles. The all white gums of this fish told me it is a steelhead, chinook gums are all black, coho gums black & white.

Perhaps the sand coating had sealed in the scent sufficiently to hide this meal from being discovered. I carried it out to the surf and the gulls and vultures quickly took notice.

Dan was a bit worried, as we had left our boats unattended for quite a while (and had not secured them very well either)

After piling up trash into caches for retrieval later, we hustled back to find our boats swirling in an eddy, off-shore, being herded by Dan’s good friend Bob. Bob boats here nearly every day and knows the land, as well as the boats. He was kind enough to push them to shore where we secured them and spent a while talking about all manner of seaside topics.

After returning to our caches to recover them, lashing everything (except one large truck tire we left up high for another caring individual to pack out), we carefully made our way to Penny Island for a late lunch.

Dan was nice enough to share his sandwich, for I had only arrived with drinks and pastries from Tomales Bakery. We devoured our meal as buffleheads and mergansers floated by.

Once the sun had dipped behind the ridge, the temp dropped and my wet wetsuit became downright chilly. (the day started out quite chilly, the drive up from Inverness was on ice-coated roads. My usual put-in along Walker Creek was occupied by Cheda’s tow truck hoisting the Hog Island Oyster delivery van from the creek, a sheepish driver pacing the shoulder)

Dan and I quickly paddled to the boat ramp to disgorge our discoveries and load boats back on to cars for the drive back.

See below what washes down the Russian River on a daily basis. 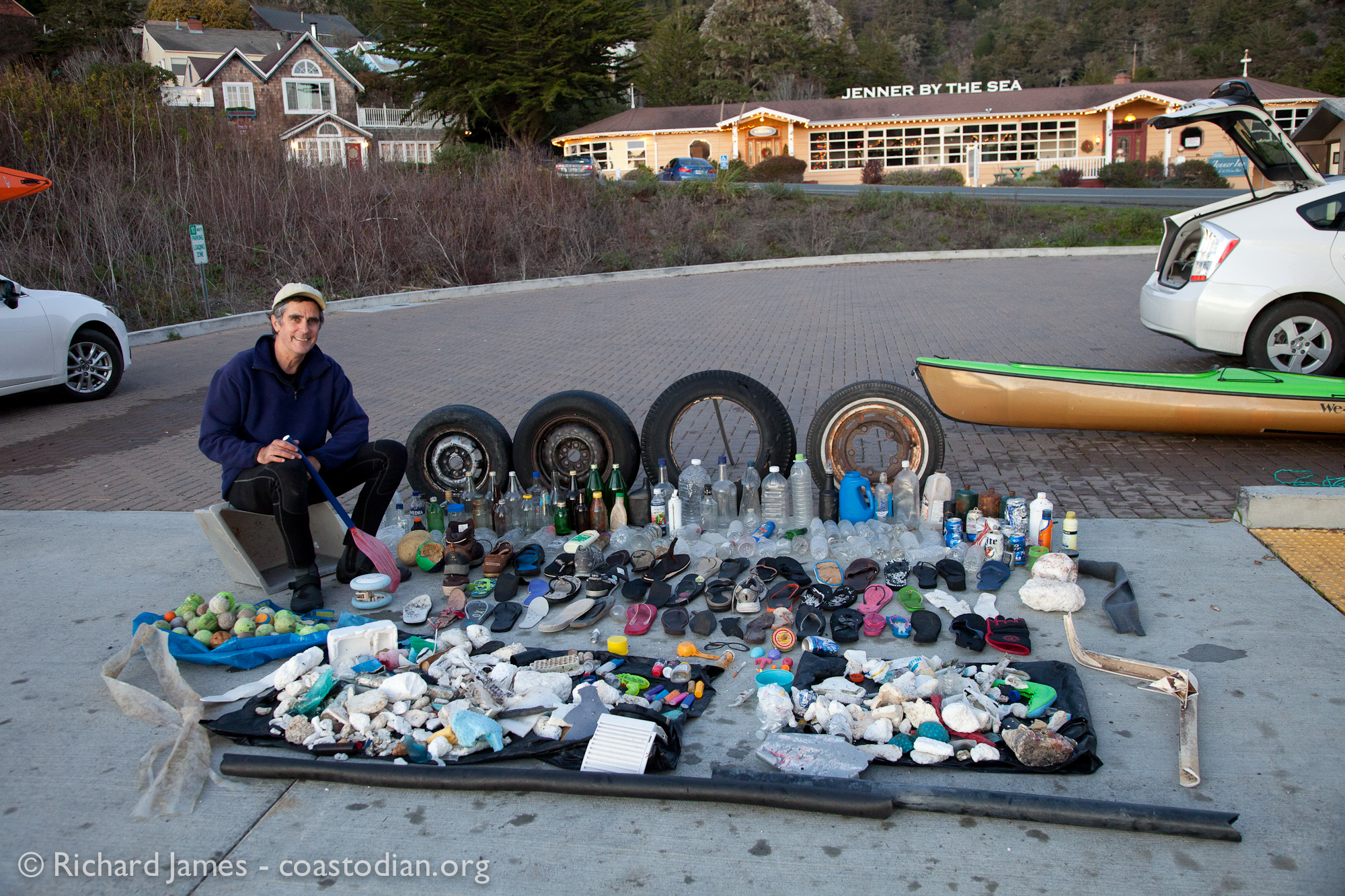 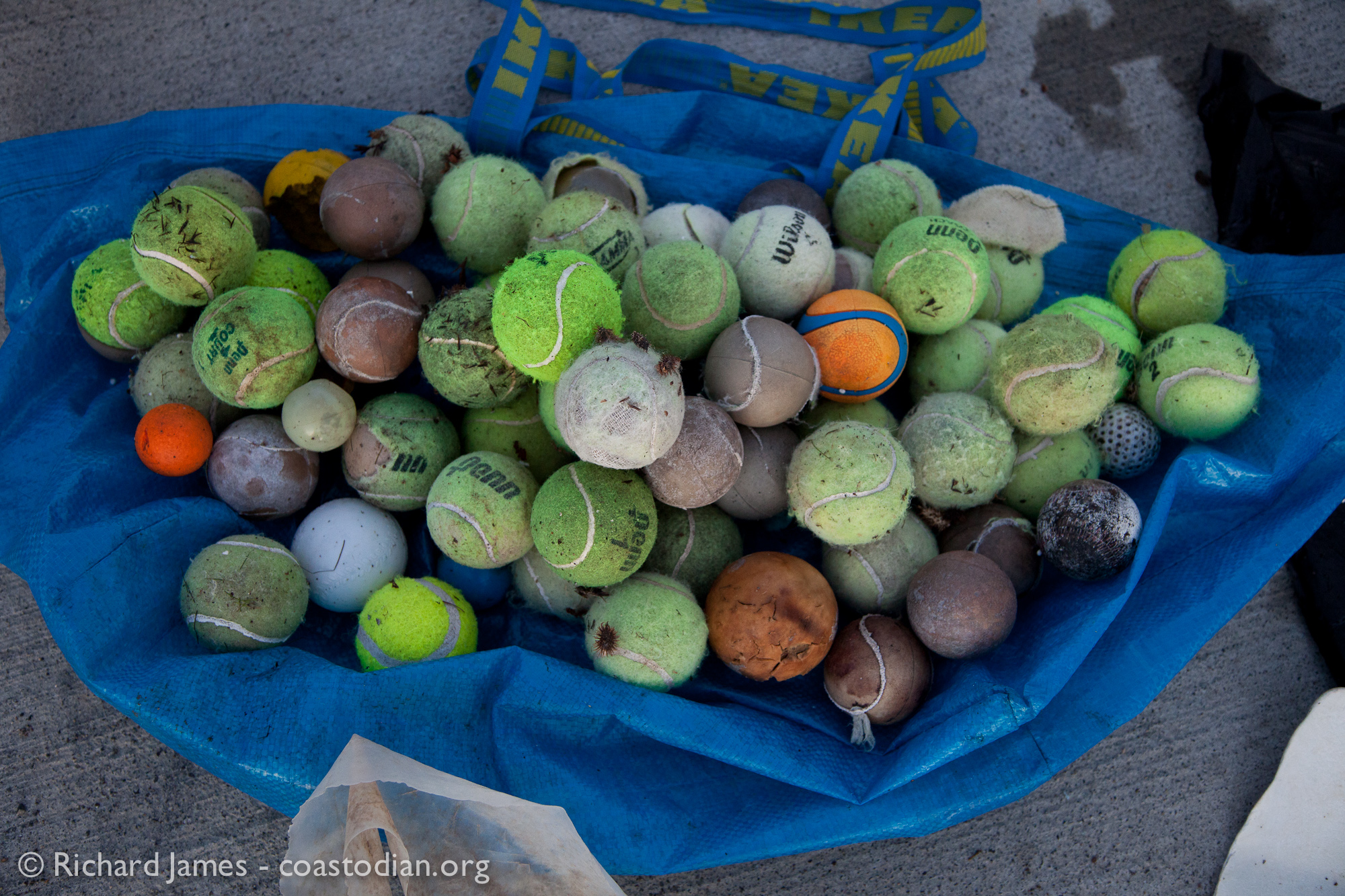 56 tennis balls on second ever ikea bag. This one in great shape, sure to help haul hundreds of pounds of trash off many beaches. 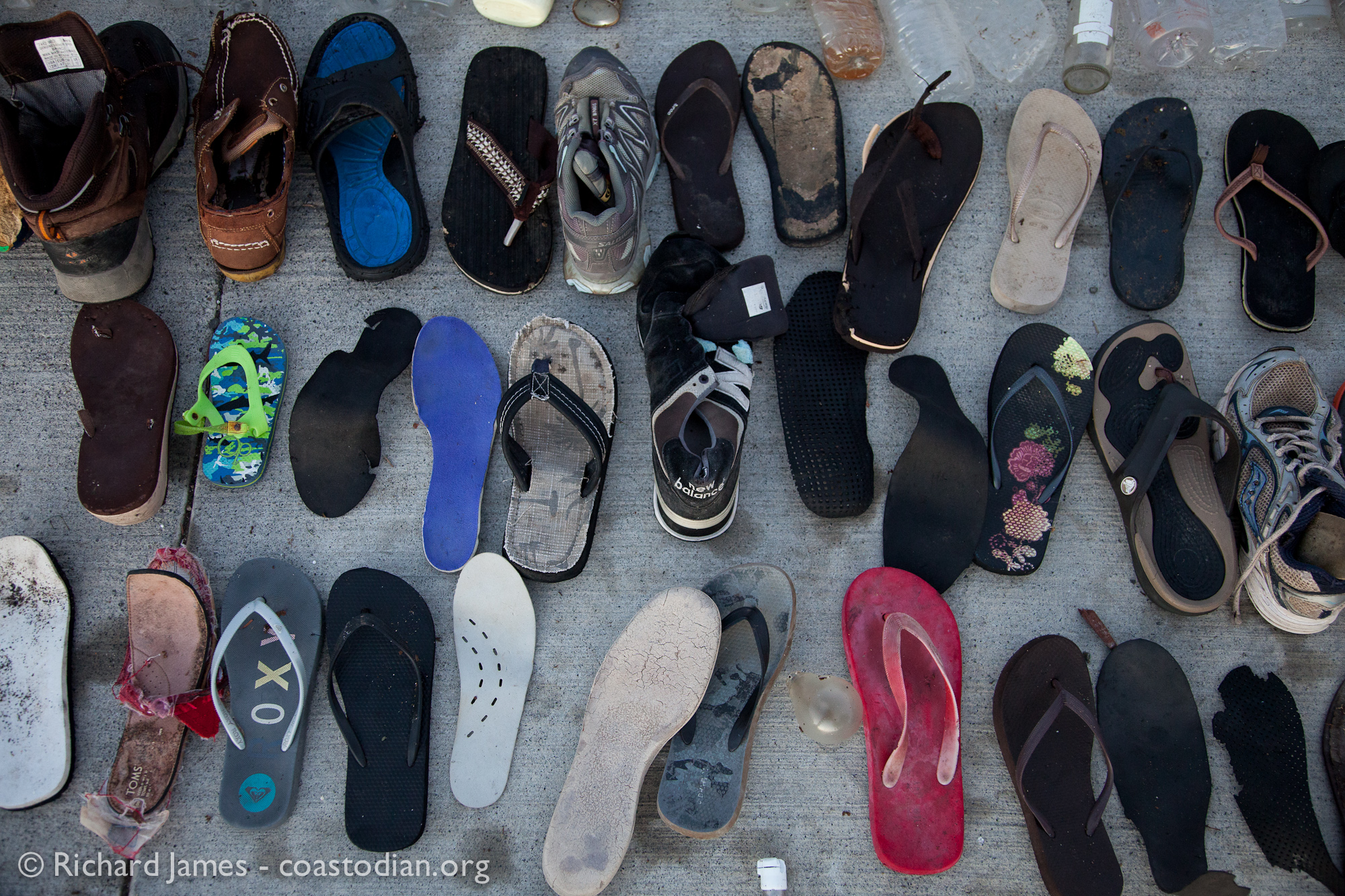 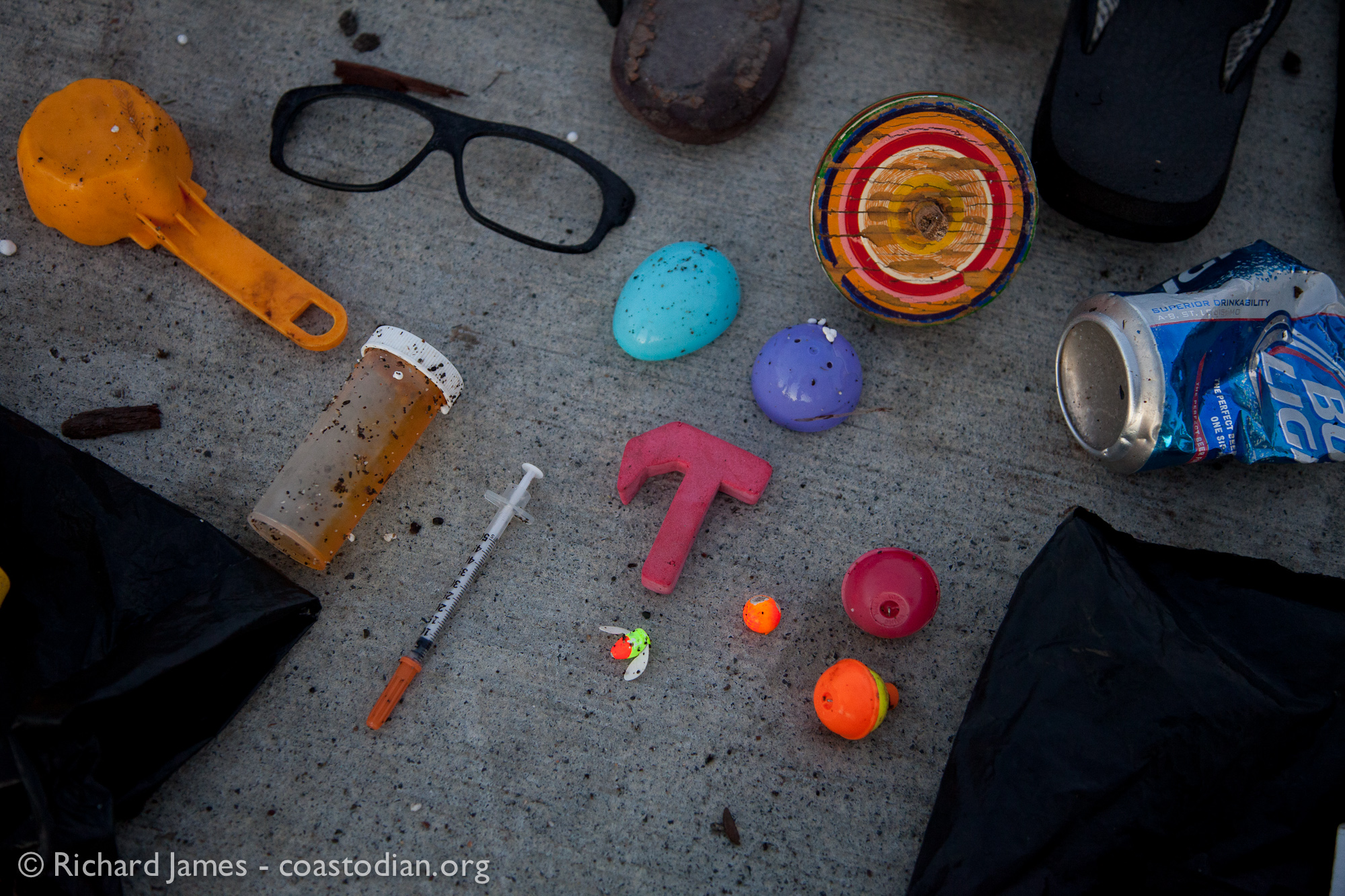 Second syringe of the litter season. 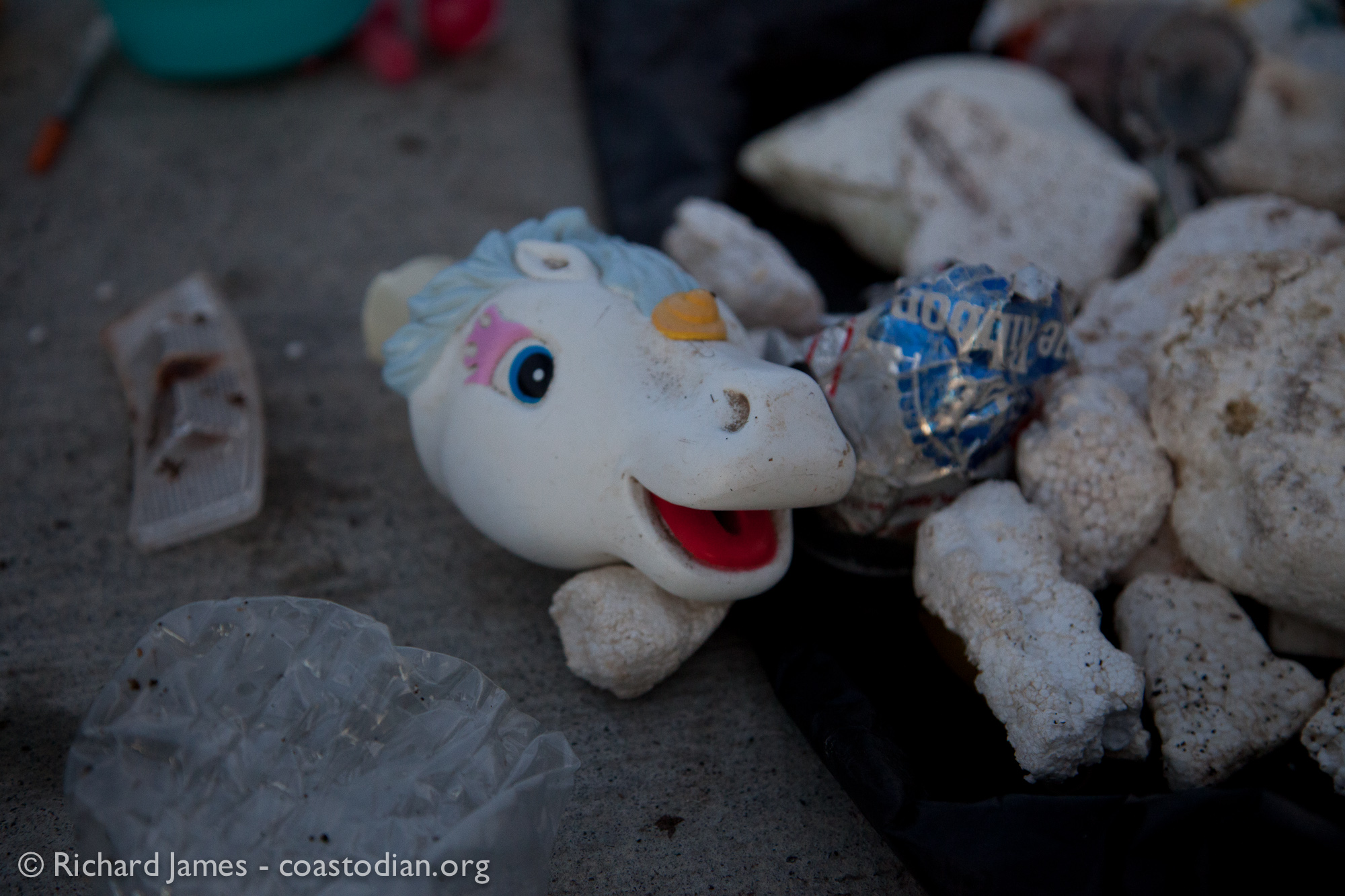 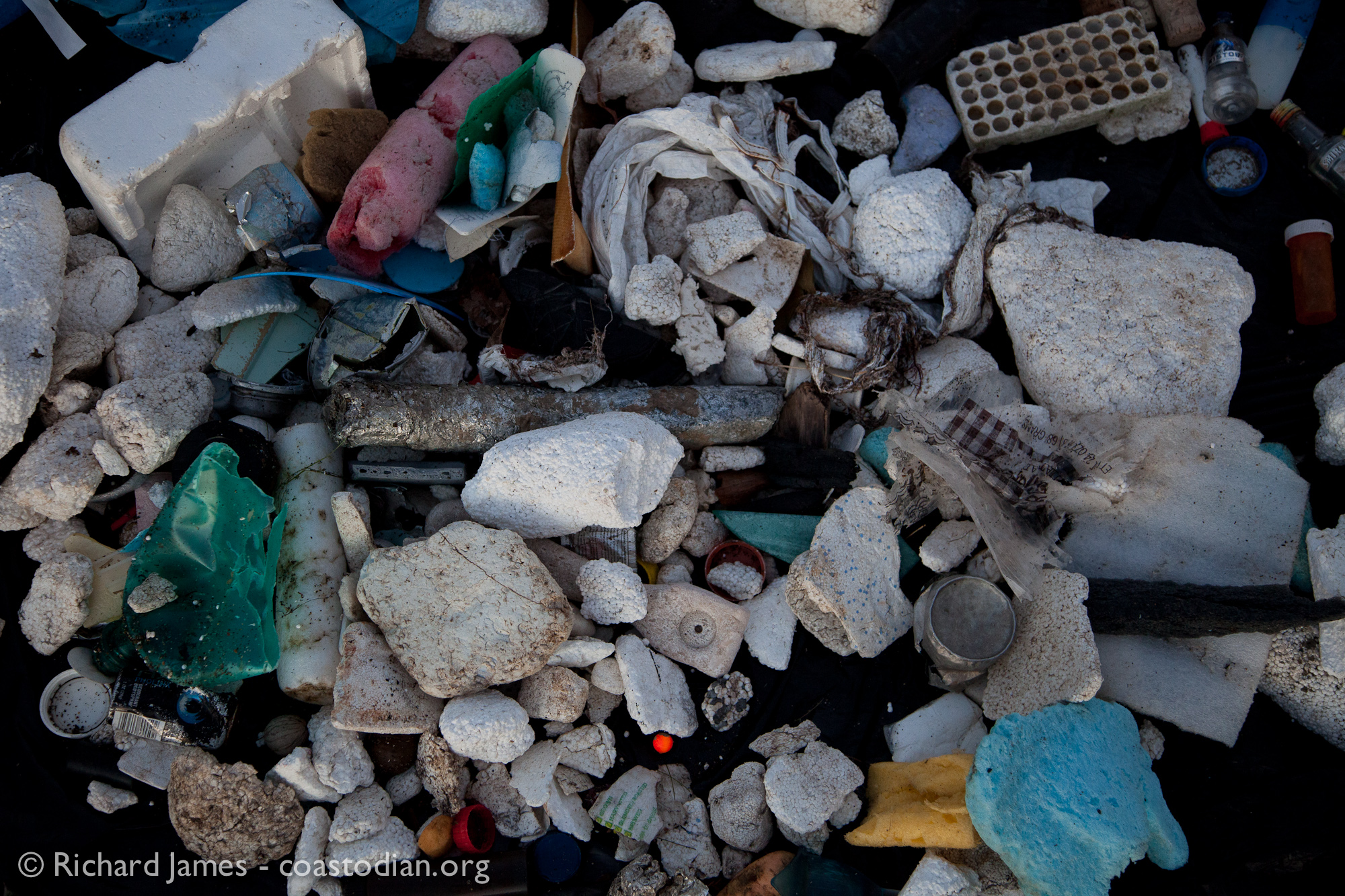 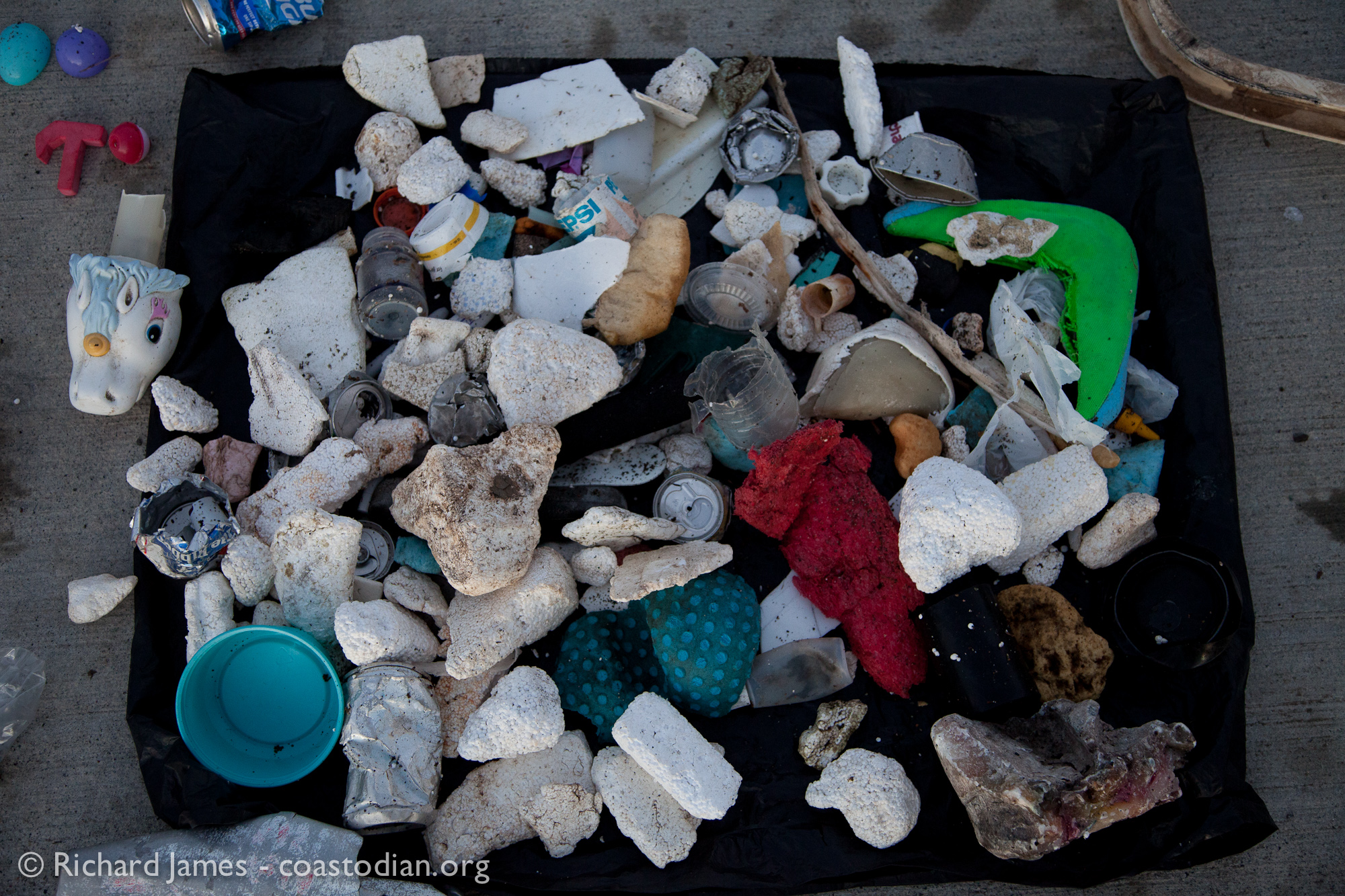 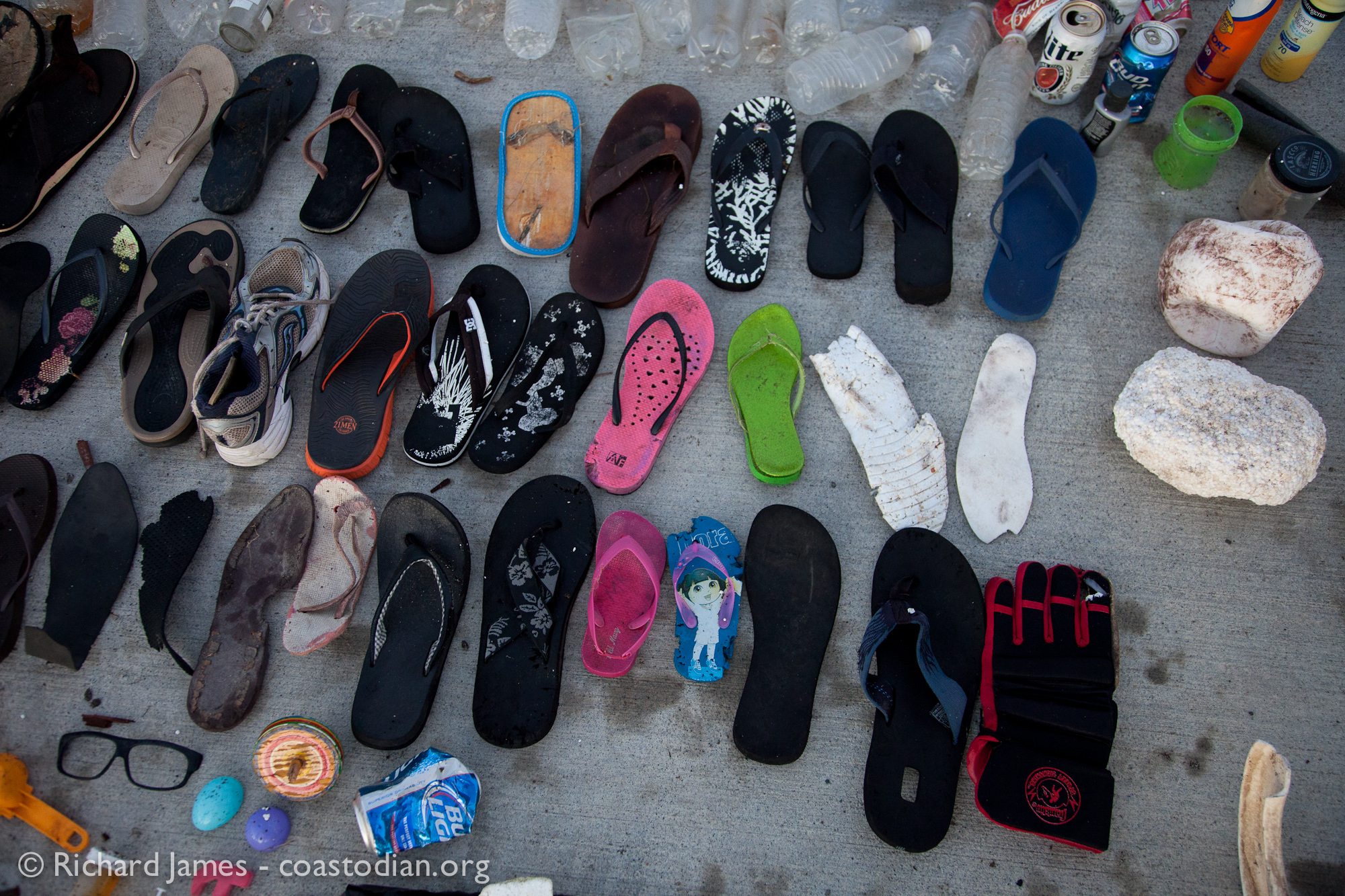 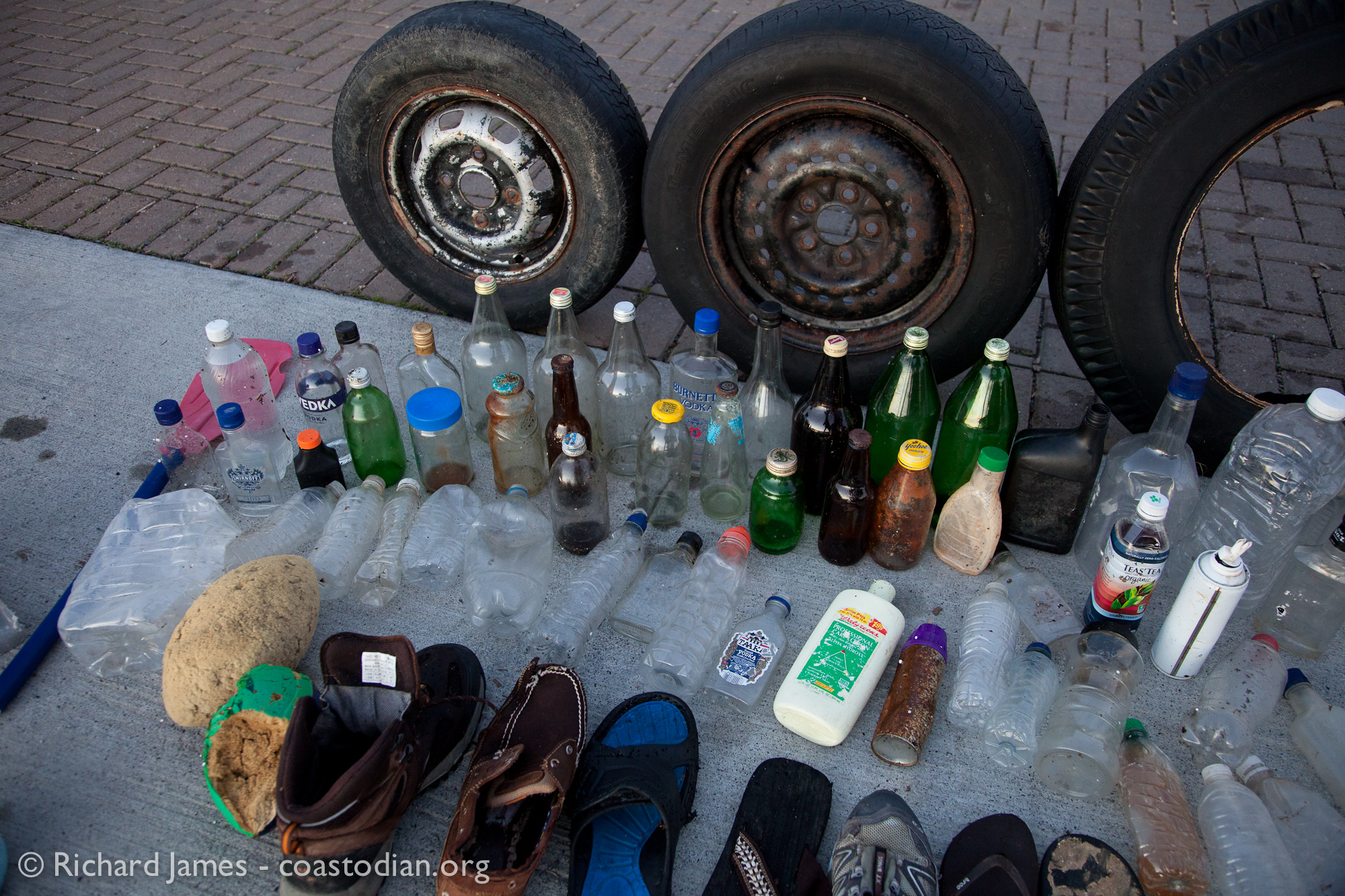 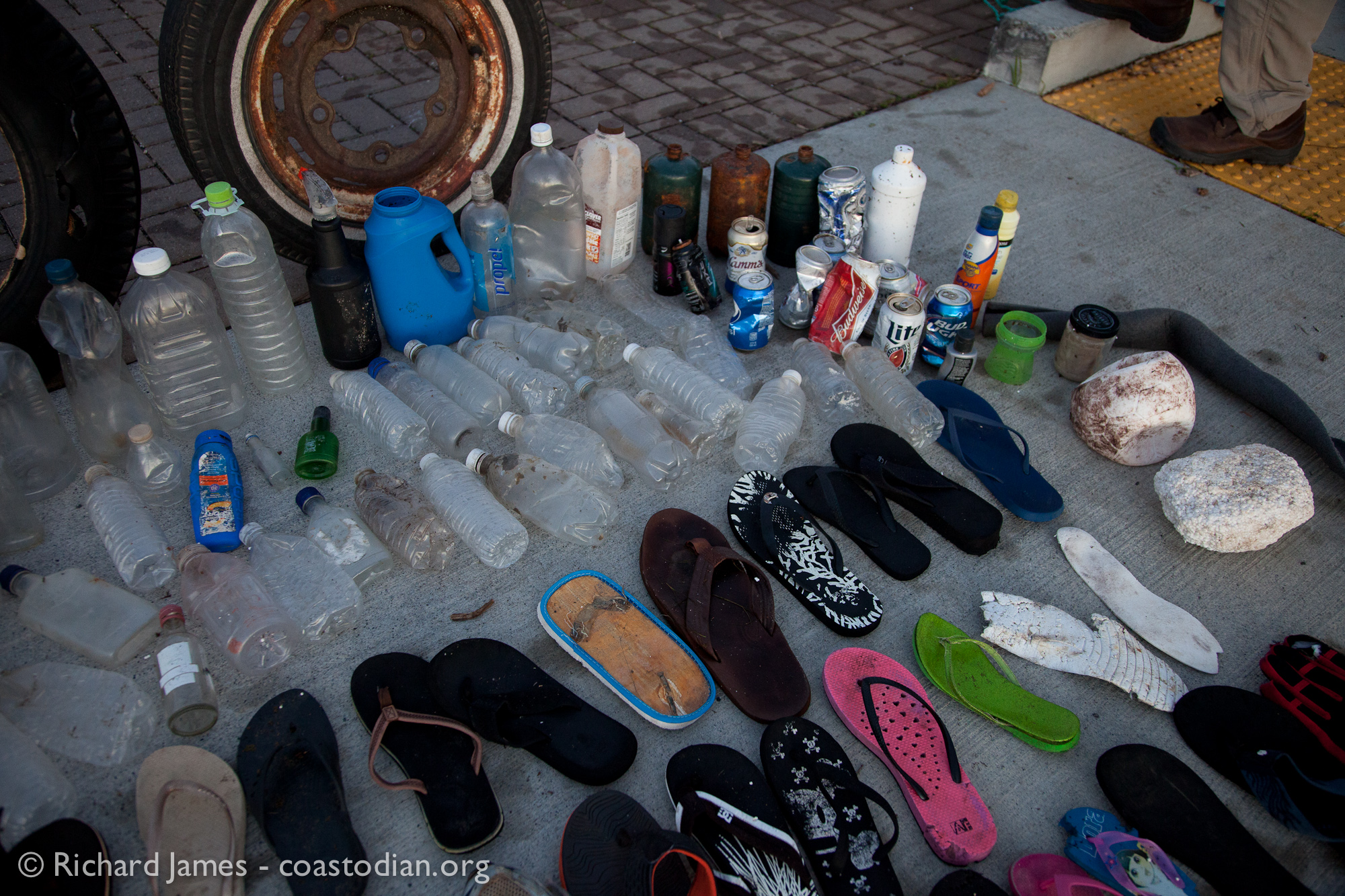 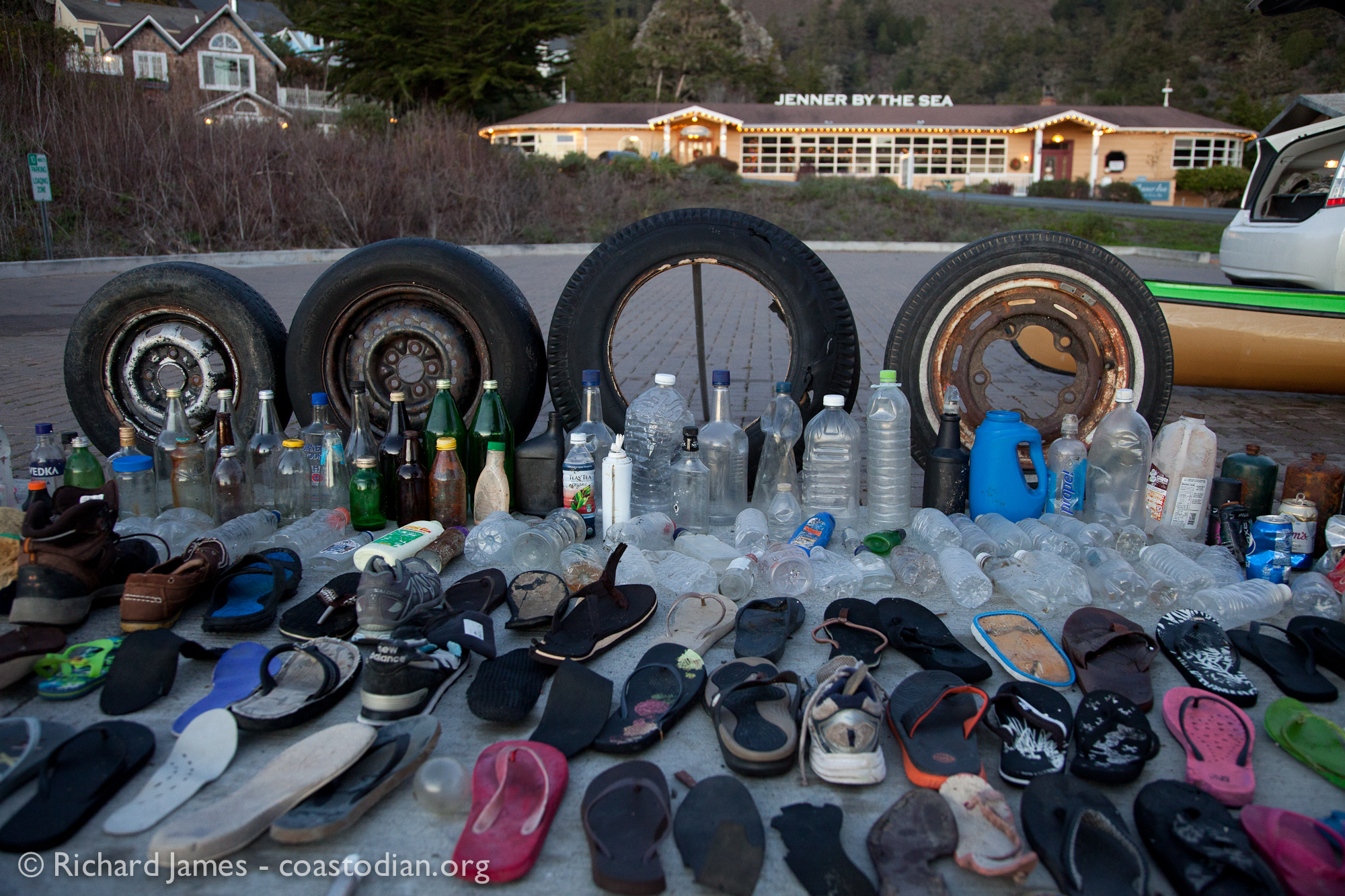 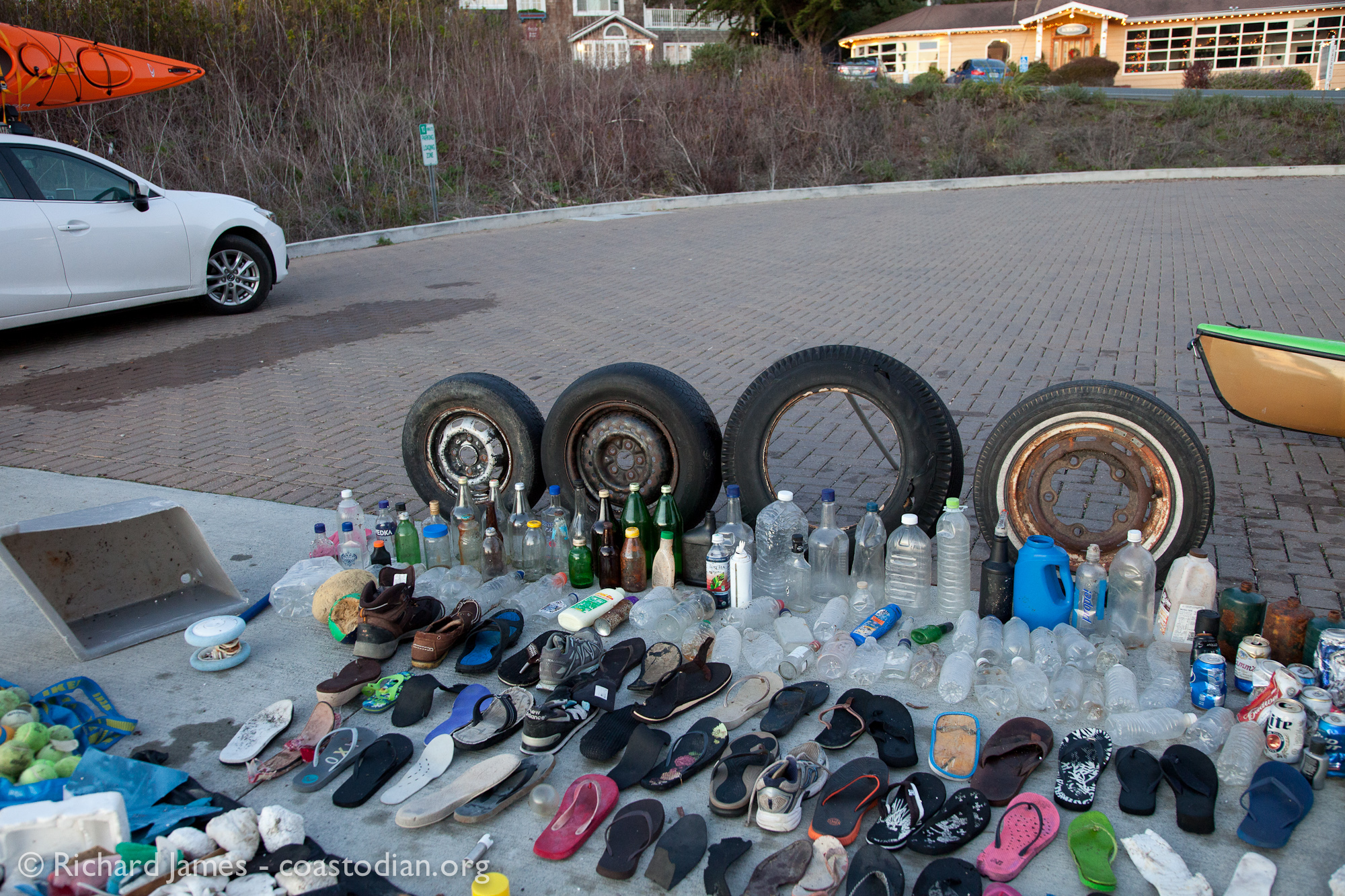