This past weekend the weather was superb. Nearly zero wind, flat water and perfect temperatures made for a sublime day on the bay.

I’ve several posts from days gone by to publish, but time is sparse and they need more than I have just now, so this will have to do for now.

It is raining hard as I write this, the lights have flickered twice which means the salmon and steelhead are about to make their return journey to natal streams whence they emerged into being 3-4 years ago. As I paddle across the shallow Tomales Bay, with each dip of the blade into water, I look down and think of the thousands of miles these fish have traveled since they left as 100 mm smolts 1100 days ago.

Today with water so flat and tide so high, I venture to the east shore of the bay to have a look and see how the shore is being treated by local commerce. Oyster farmers in particular.

I’ve been pretty forthcoming about what I see as their shortcomings in terms of policing up the tools of the trade they have chosen. It is with pleasure I report that they seem to have gotten the message (unlike other oyster farmers in the area, see here for more on that) and are picking up after themselves.

In the past I’ve found dozens, hundreds of grow out bags littering the shore and inter-tidal region. Along with dozens of the tags from the bags they buy from Washington State and have shipped down to resell. 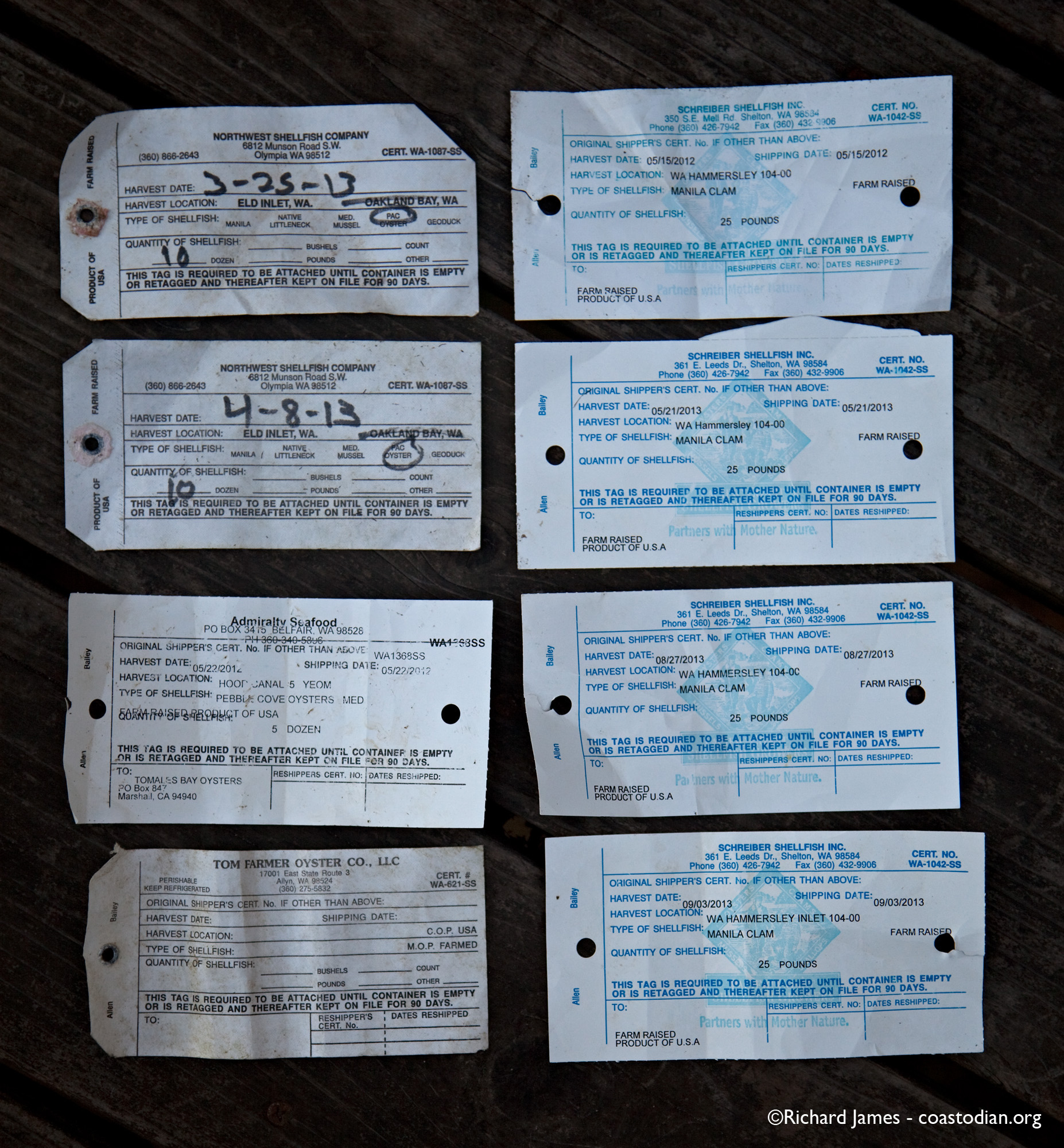 Hey California, call your oyster farmer. The numbers are right there on the tags.
As always, click on the image to see a larger version.

That trip I only found a few bags and 8 tags. And I had to look hard for them too. Seems someone (TBOC?) is out picking up their trash. Thank you to whoever is getting it. If you do this regularly, I won’t be finding stuff washed way up high in the bushes and buried by plants for years. Or worse, it won’t be washing out to sea where it harms animals, and eventually is ingested by animals, including humans that eat said animals.

So here I am on this gorgeous day, thinking I am not going to find much mariculture debris littering the shore. I take advantage of the high tide and ride the incoming tide into an area I later learn is known by some as Tomasini Lagoon. It is a triangular shaped region just below route 1, separated from Tomales Bay by a dike.

Once inside I begin to paddle close to shore in a counter-clockwise fashion, letting the tide push me along. Suddenly the silence is broken by a shriek I know. I look overhead and a peregrine is soaring above me, letting me know whose lagoon this is. As I make my way along one side of this watery triangle, the first grow-out bag comes into view and I must beach the boat and go get it. This is repeated over and over again as I pass one vertice and begin to traverse the second side.

Soon I am greeted by a couple in a canoe. I’ve not seen them before and their first words to me as they look at my garbage covered kayak are “Thank you for doing this. We were out last friday doing the same thing up north of here.” I learn they are Bridger and Katherine and they have boated the area for years. After a brief visit, they head on their way and I continue on mine. Later, I see them outside the triangle on-shore with something. When I get close I see they’ve discovered and propped up 2 grow out bags I had missed so that I can get them on my way out, which I do.

Here you can see my path inside the lagoon and the locations of the 22 bags I found and two bags found by B&K. 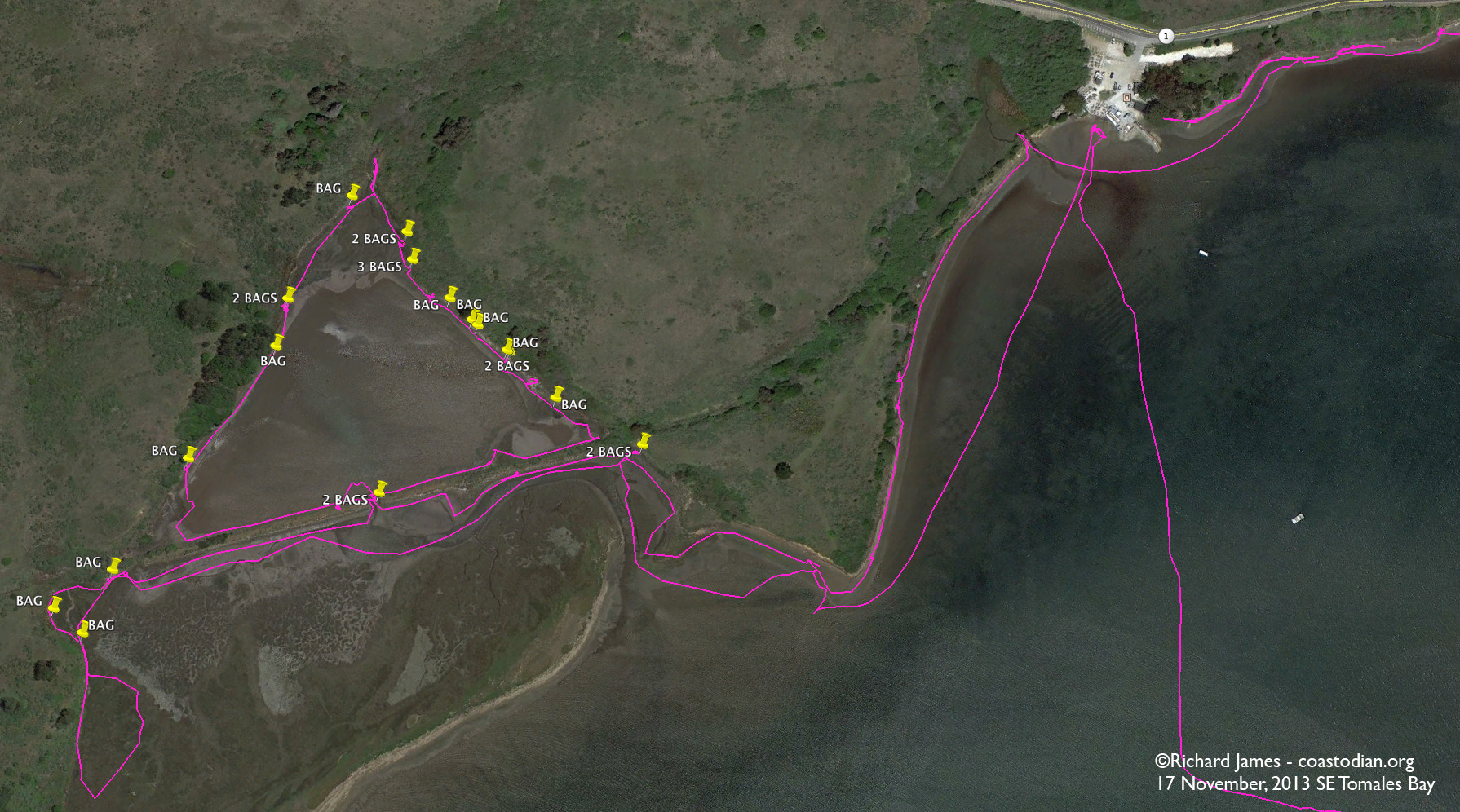 Here is a device I have never before seen. It looks expensive. Who can tell me what it is? Or whose it is and why they left it here? 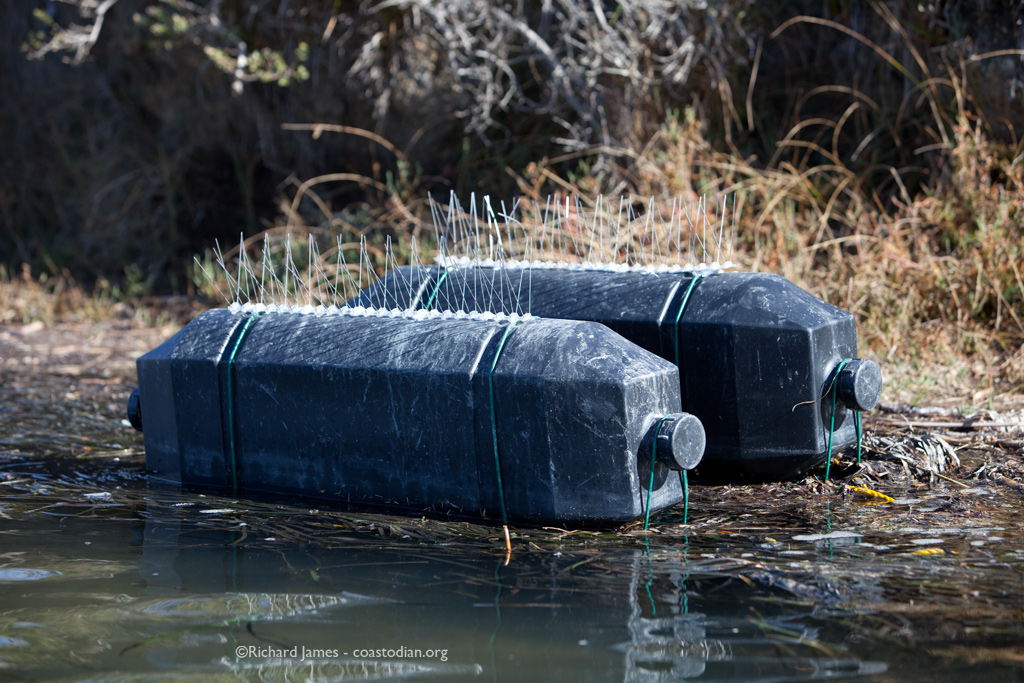 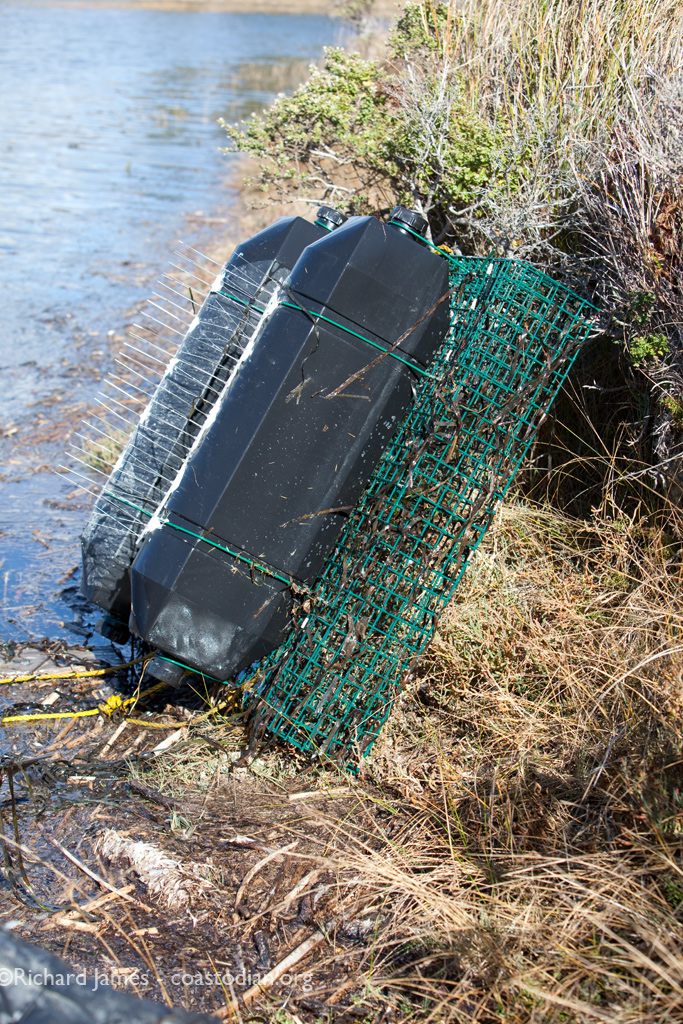 The rest of the images show some of the garbage I picked up on my paddle through nature.

On my way back, I met another fellow, Dan, also out for a paddle on this perfect day. He too thanked me for my efforts and then paid a visit to this blog. You can read about his day on the water here. He teaches kindergarten in Sonoma and loves to get out on the water whenever he can.

The last image below, as well as the header image show the beach where I placed all the oyster gear I found. It is at Tomales Bay Oyster Company. There is little doubt where this trash came from. Have a look at the google earth image above and you can see how close to the retail operation the triangle lagoon is.

It was a busy day there, yet only a couple people came down to ask me what this stuff was and why I was dumping it on the beach. You can be sure that I explained in detail what it was and where I had found it.

They took a sip of their beer and returned to the festivities. 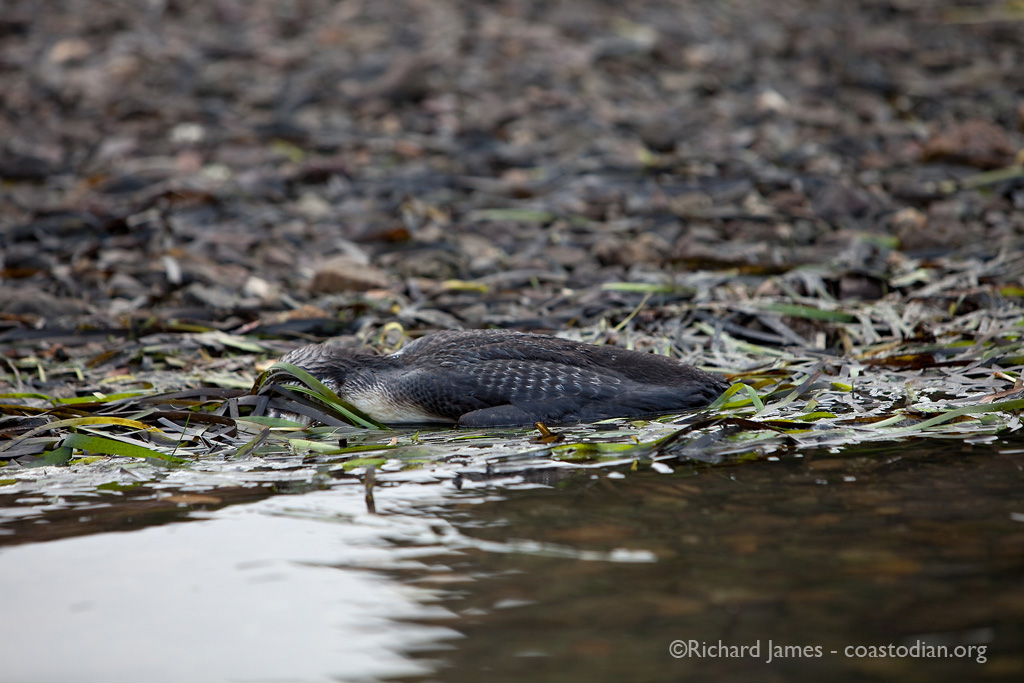 Dead loon in the wrack 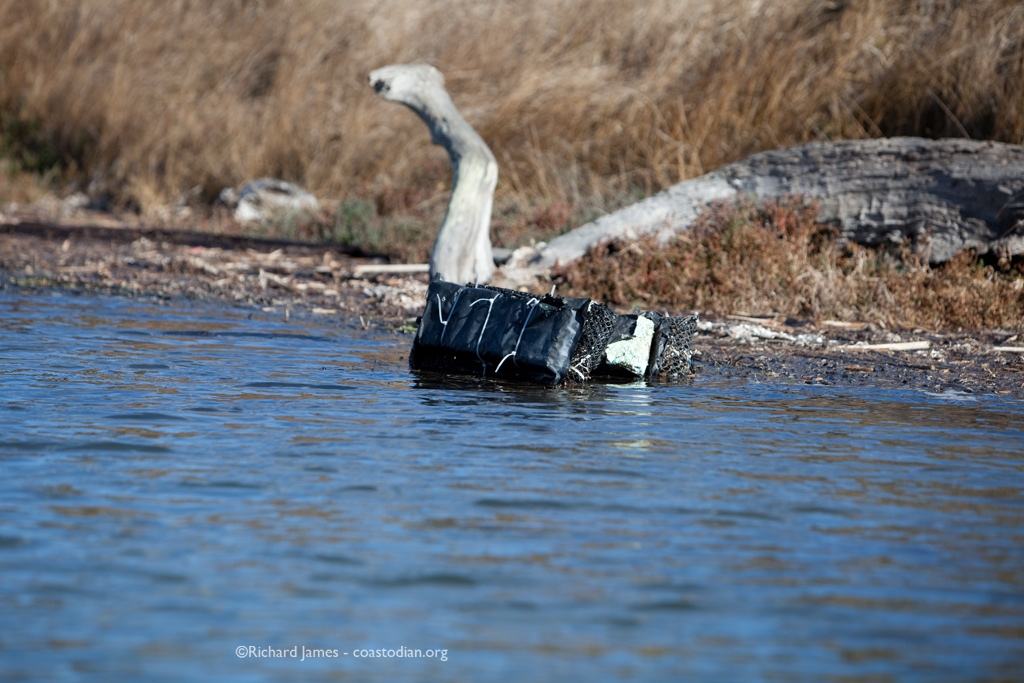 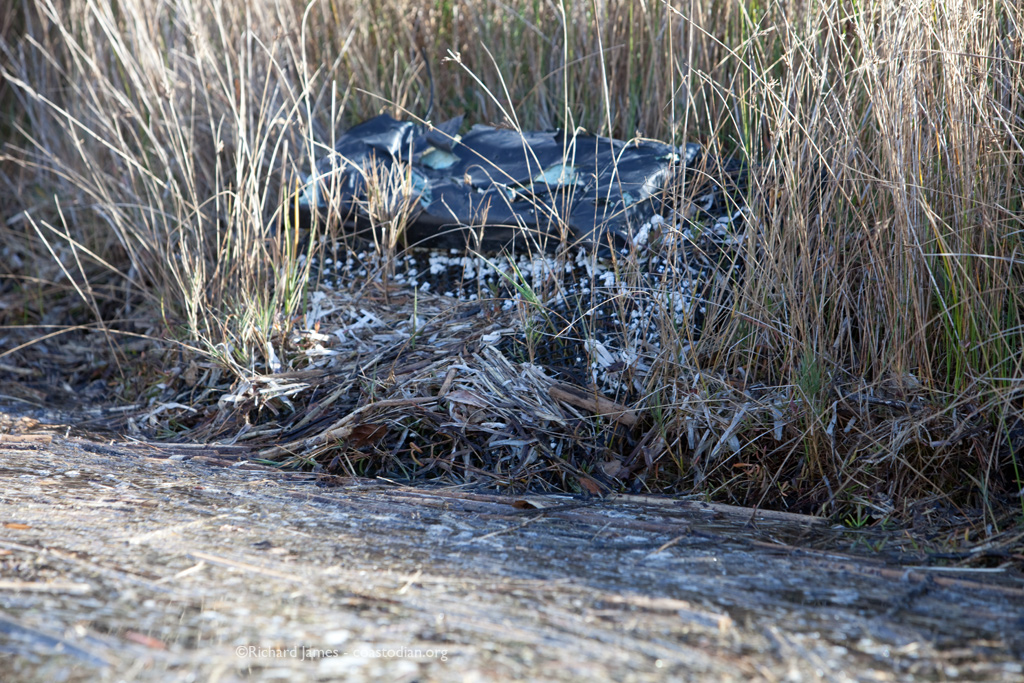 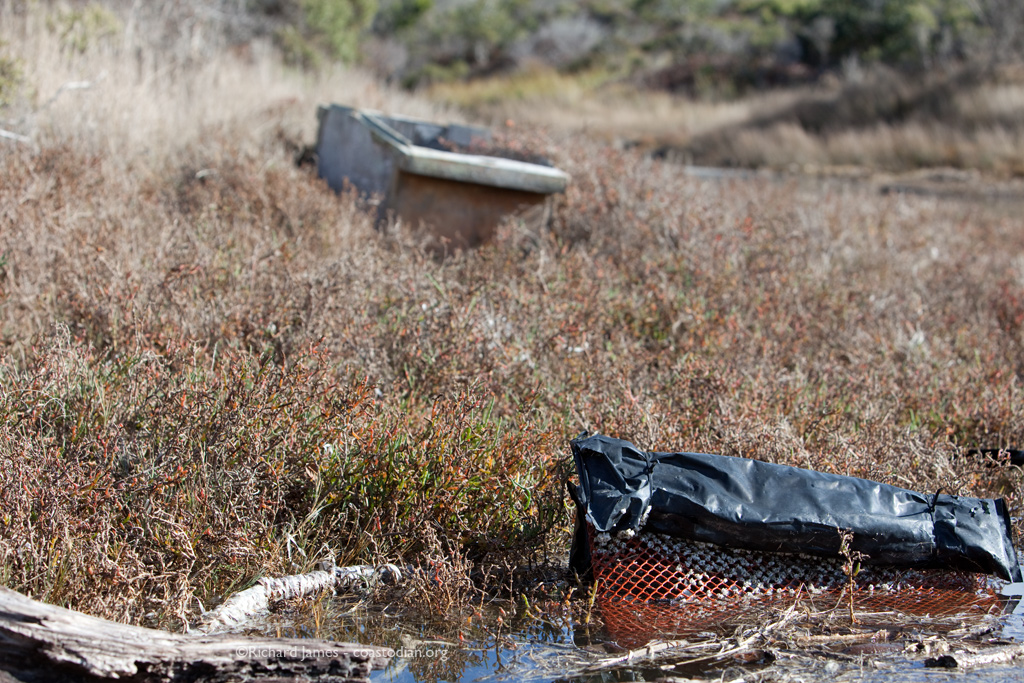 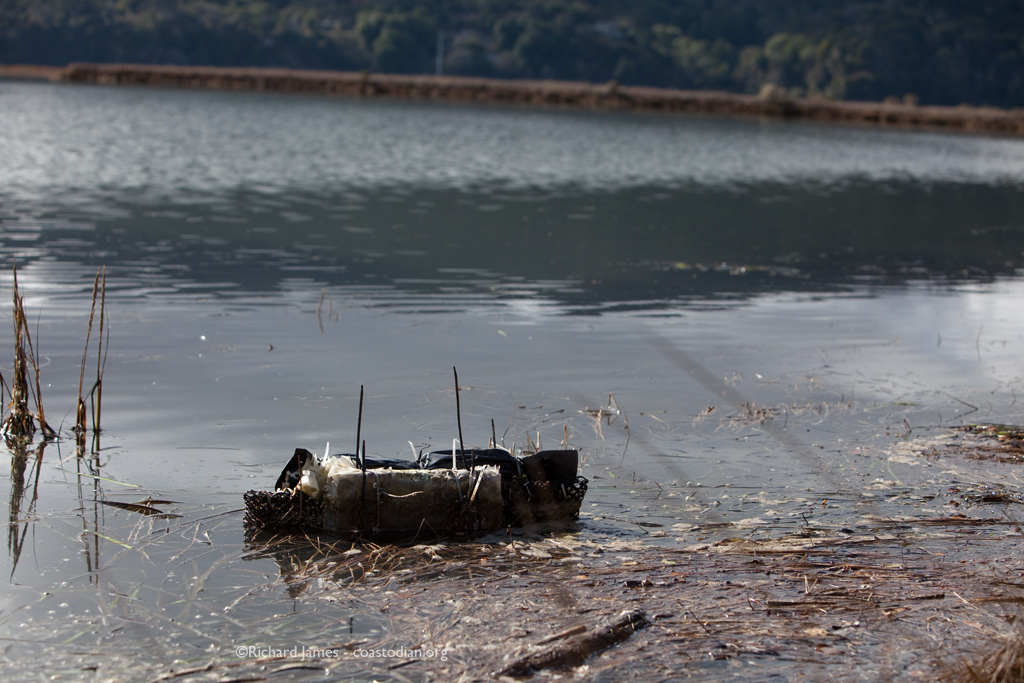 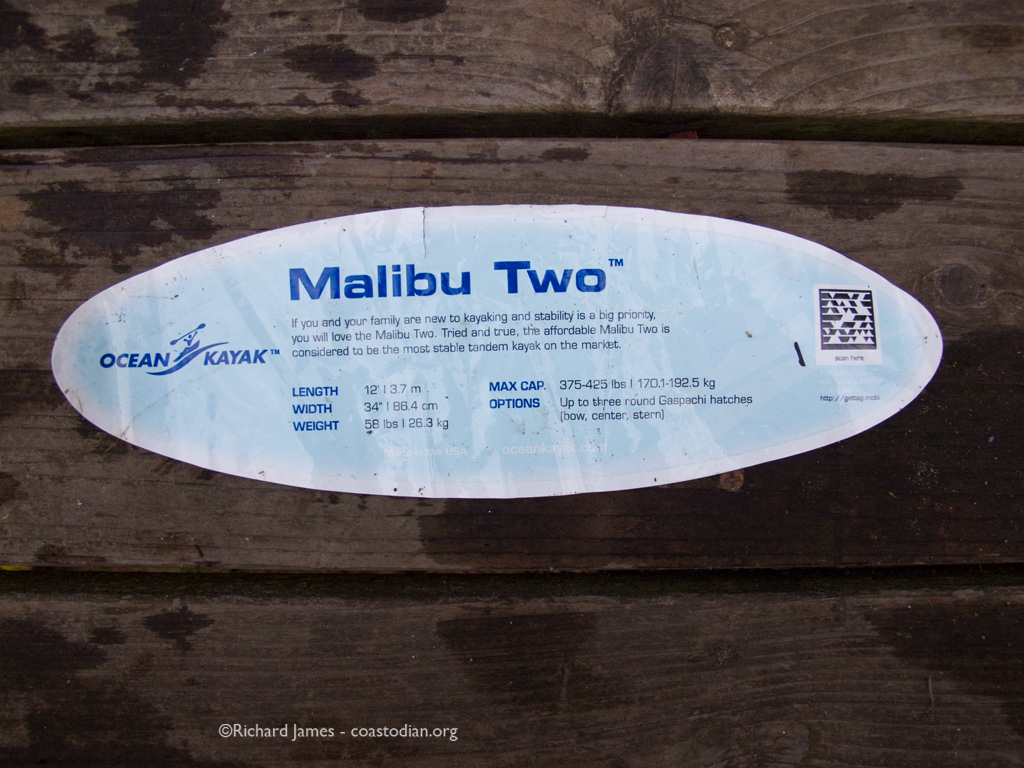 I found a kayak! OK, not the whole thing, only the label. 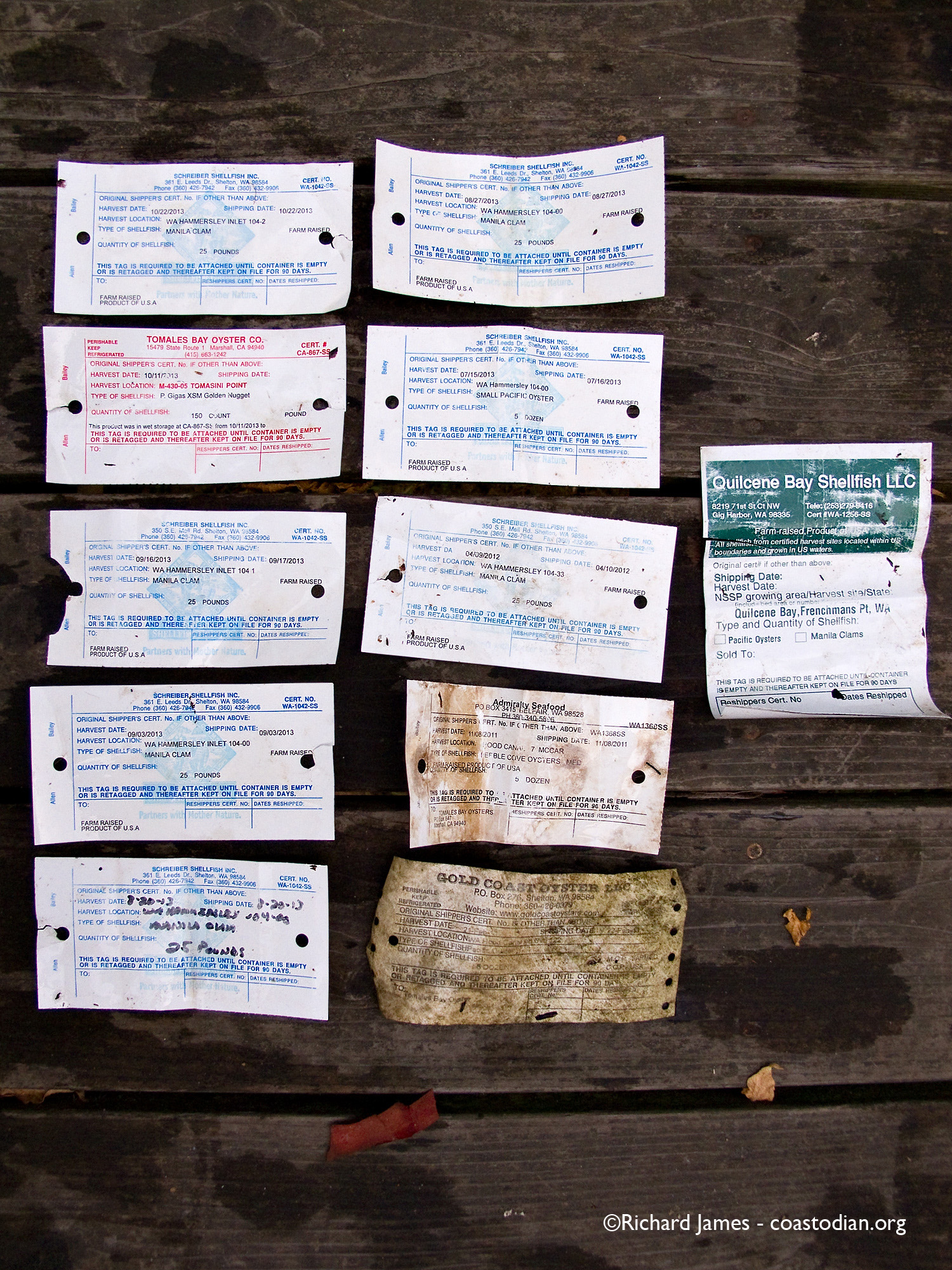 Tags from bags of shellfish, shipped from Washington State to Marin.
All found on 17 November, 2013 along the shore near Tomales Bay Oyster Company. Check out the dates on those tags…
Click image for a larger version. Know your farmer, call them up! 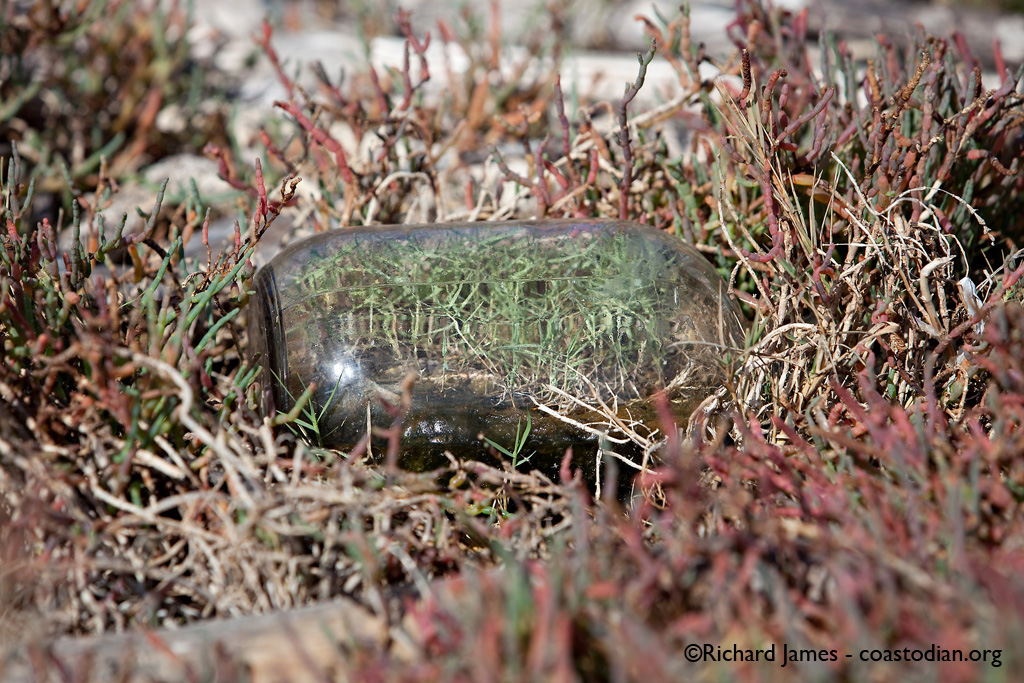 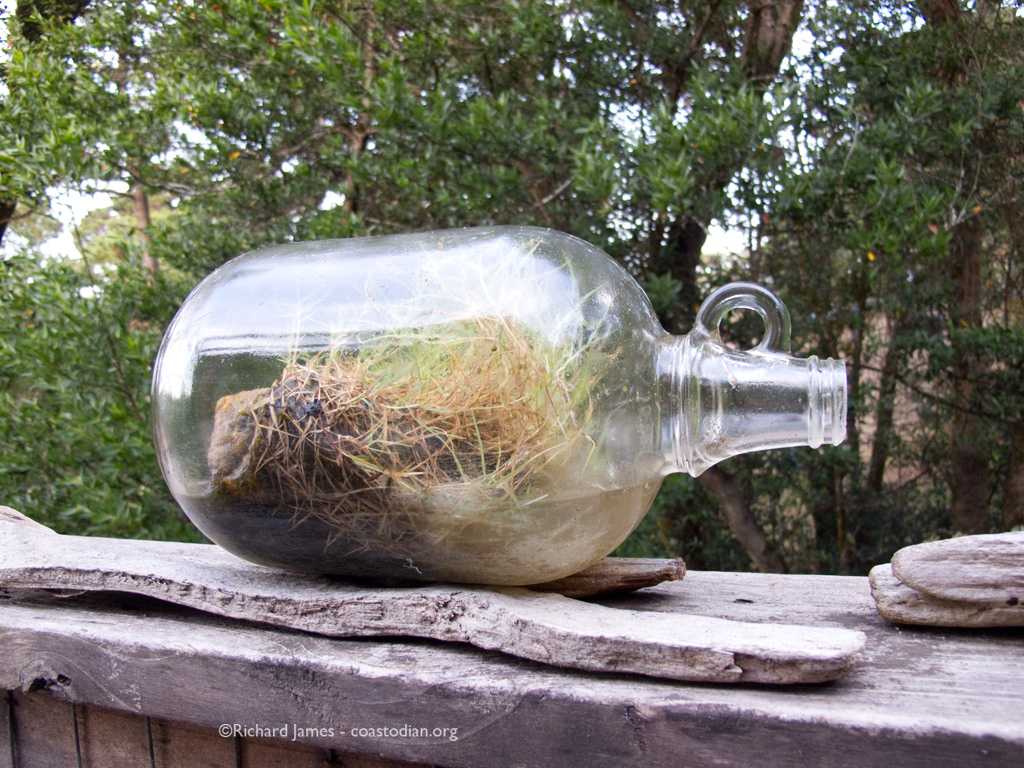 The earth is not so very different from the gallon wine jug with grass growing inside it.
A limited amount of space in which to grow.

When will humans figure out that we have to take good care of this vessel on which we live?

Damn it, shut the gadgets off and get outside with someone you love, look at this place we call home.

Before it is gone. 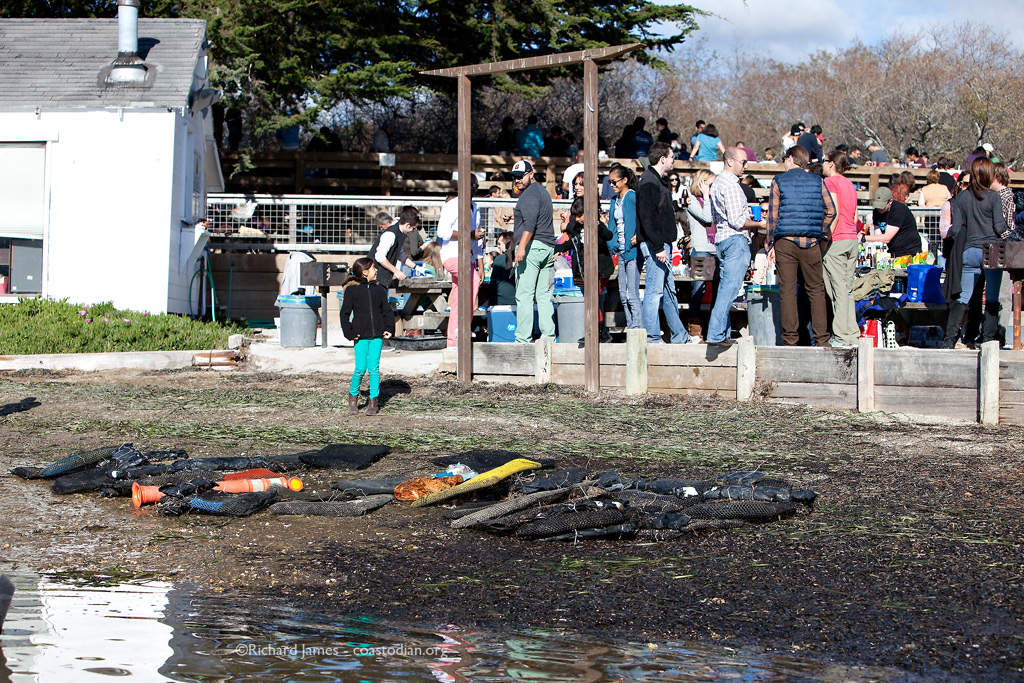