This past weekend we experienced King Tides, exceptionally high (and low) tides that happen this time of year.

To see some even higher tides, go here.

The water was so high I was able to launch my boat from the bridge at Chicken Ranch.

My goal was to head south into some formerly diked off areas to the east that only flood deep enough to get into during high tides. With the added benefit of the high water floating all the human-made plastic for easy finding and retrieval.

Down near Bivalve I recovered a second swim area buoy that had gotten loose and drifted far from its’ usual spot. I found the first one last year, a few hundred meters south of this one.

Paddling back I ran into Dan from Sebastopol, we’d met a few weeks prior a bit north of here. We visited briefly as we recounted how we each enjoyed the high tides. I had to split off to pick up some trash I had cached. Dan was with a large group of paddlers from Petaluma. My plan was to pick up my cache, then stop by Millerton (where they had put in) and visit on my way back as they pulled their boats to the car. As we parted, Dan shouted that he found another duck decoy just then. He found one as well on our first meeting. I too have a pair of found plastic ducks, one pintail and one mallard.

Yet, there was too much trash to pick up and I missed him by moments.

I still stopped at Millerton, a place I had not visited on the water in all my travels in Tomales Bay.

As I approached the shore I began counting tires, one, two three. Large ones. Tractor tires. All within 200 feet of the where the trail hits the water. I was nonplused. All these years I had been out to remote areas of Point Reyes Seashore gathering trash likely never to be seen except by divers or other intrepid adventurers, and here these tires lay in the mud. On the shore for what appears to be decades by the looks of them, not 200 feet from the cars bringing all the dog owners to this busy beach.

I may have missed Dan, I was not going to miss the opportunity to clear the Bay of these huge tires. 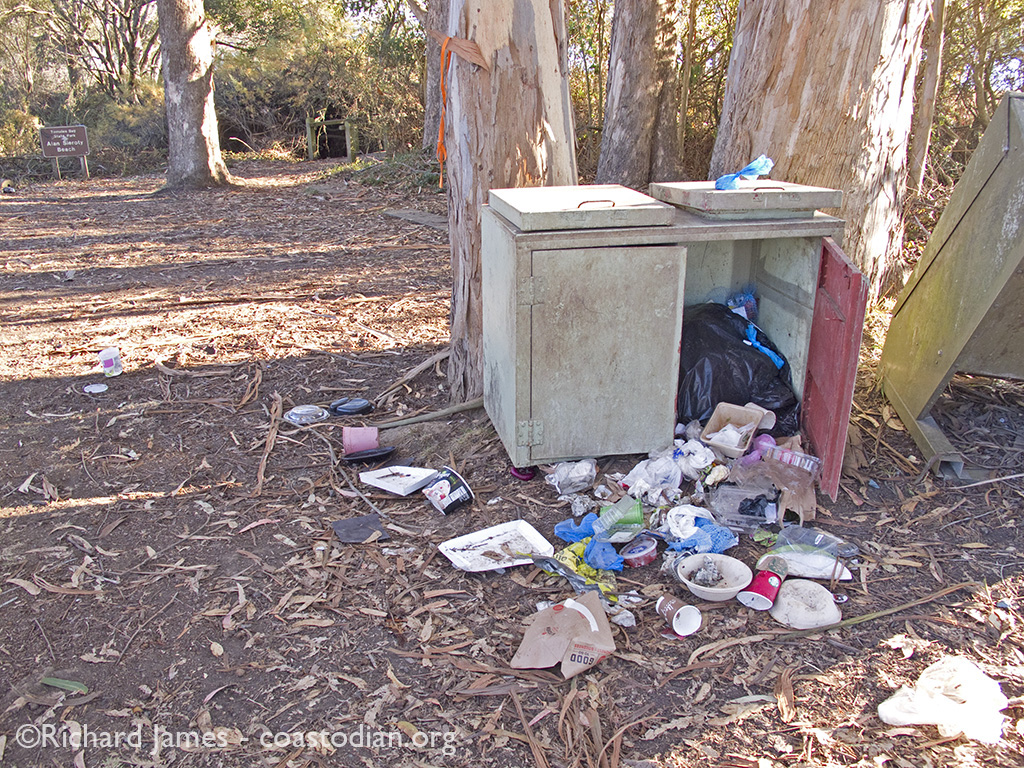 Tires all over the shore, and this in the parking lot, two days running.
Is this status quo for Millerton?

I had to dig them out of the mud, stand them up, scoop 20-30 pounds of mud out of them and roll them to the hill that leads to the parking lot. As I rolled the first one along the bumpy shore, A man out with his family picnicking got up and walked over to me,

“Do you need some help?” he asked.

“That would be great” was my reply.

“But you are going to get very muddy.” I offered.

“No problem.” was Armando’s response.

Together we rolled it, wobbly, up the hill. He took it the rest of the way to the parking lot. I was off to get another.

Armando from Berkeley told me he loves to come to this beach with his family. When he saw me struggling with the huge tire, he became inspired.

He and I rolled a second tire, as big as the first up to the lot. I was not sure I was up to a third so I suggested he enjoy the new year day with his family and thanked him for his help.

As I neared my boat, I was drawn to a third tire, laying in the shallow water, filled with mud. This one required a lever and fulcrum to pull it out of the mud. Fiddling with sticks and logs to make my mechanical advantage, Kevin “KC” form Inverness Park saw me and he too asked if he could help. He was dressed even nicer than Armando was. I explained the mud and he would not be deterred. He stripped off his jacket and came right over to help. Together we got another large tire up the hill and out of the Bay.

His wife snapped these photos of us. 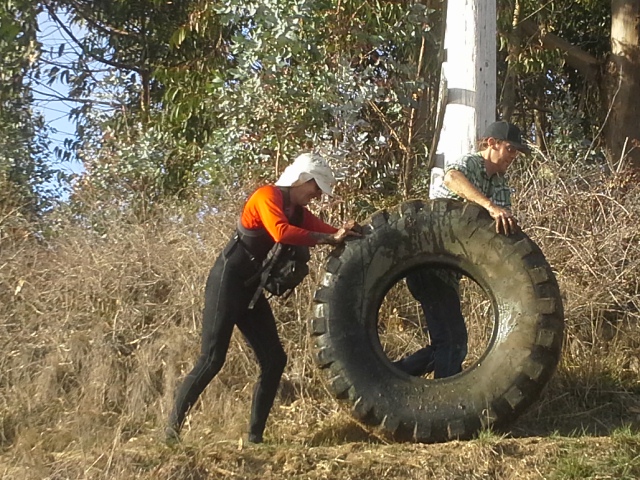 KC and I roll a tractor tire out of Tomales Bay to the parking lot for removal. 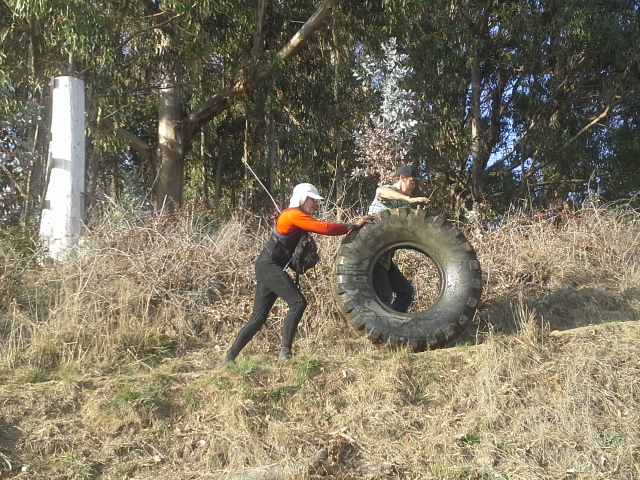 Afterwards he then offered me a cold beer (which I gladly accepted) and he opened it for me, as my hands were still coated with thick black mud, bleeding profusely from where the barnacles had sliced them.

I plucked a fourth tire, this one a tiny 18-wheeler that was on dry ground and rolled it up the hill solo.

This makes fifteen tires pulled from the bay so far.

There are still at least 2-3 more here, as well as a large rear axle from some ancient vehicle of some sort laying in the tiny creek nearby.

I placed the swim buoy in with them. Later I called the state dispatcher for parks and the folks from Samuel Taylor had them taken care of by that evening.

This six cylinder GM engine in the water earlier sure looked out of place. Clearly left by some lazy SOB that had backed his truck up to the cliff next to route 1 and pushed it over, saving a trip over the hill to the recycler. His problem was now everyone’s problem. This is the third block I have found in Tomales Bay. The other two are likely remnants of boat wrecks, both on the west shore. 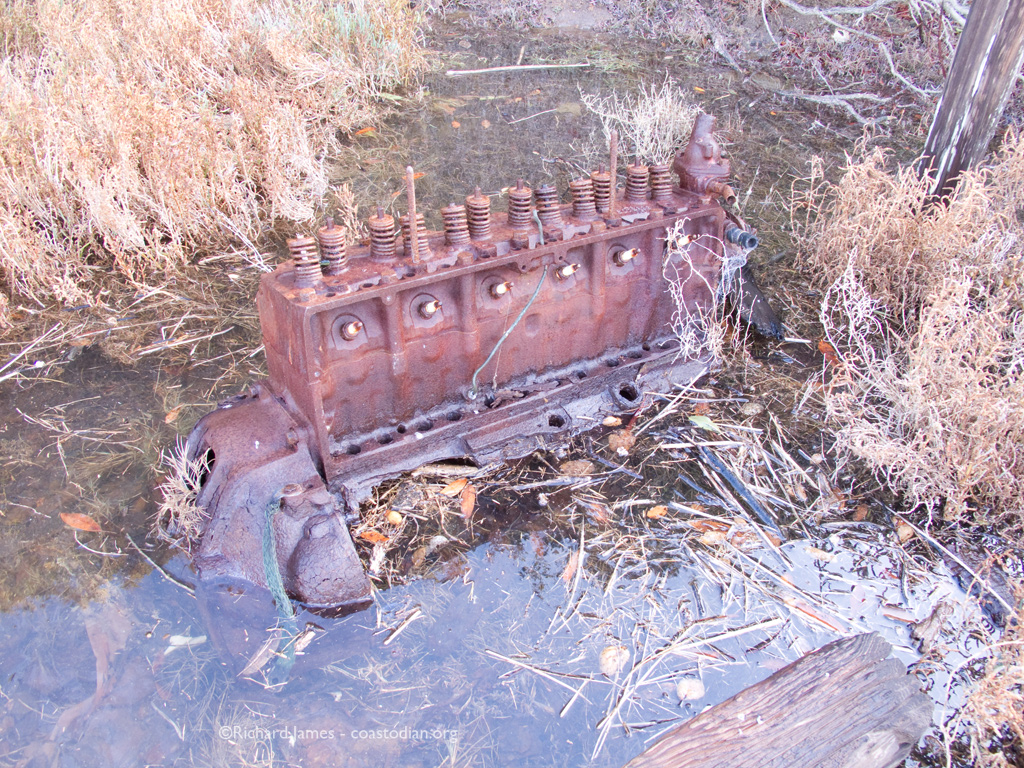 Just what every body of water needs – NOT. 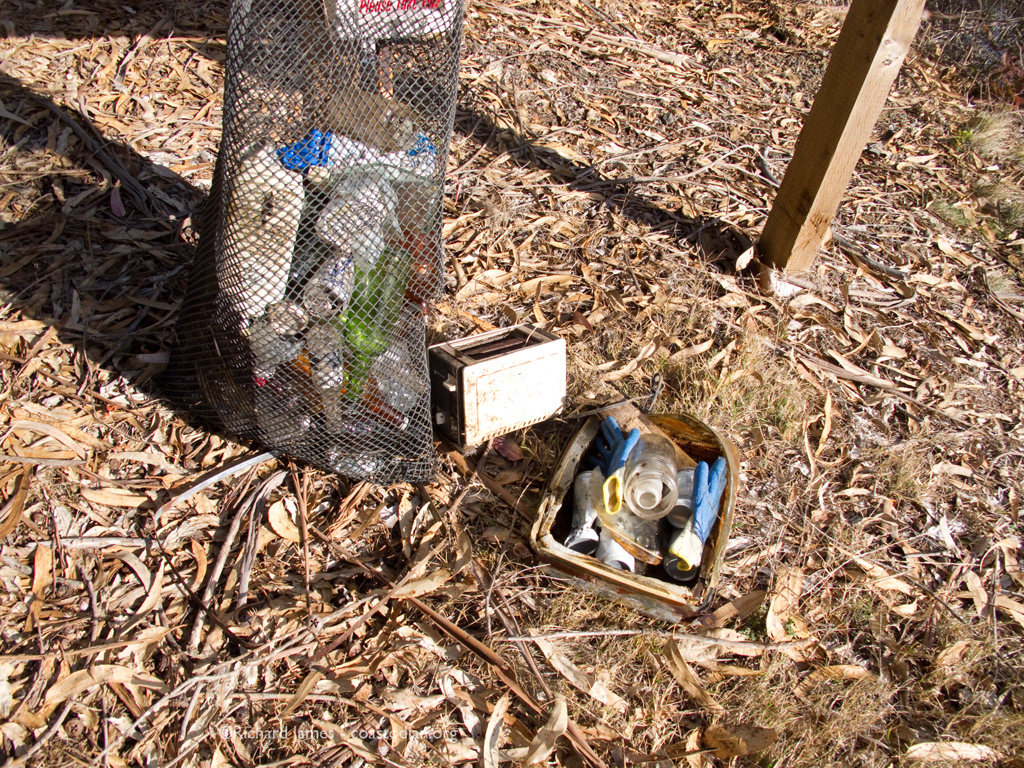 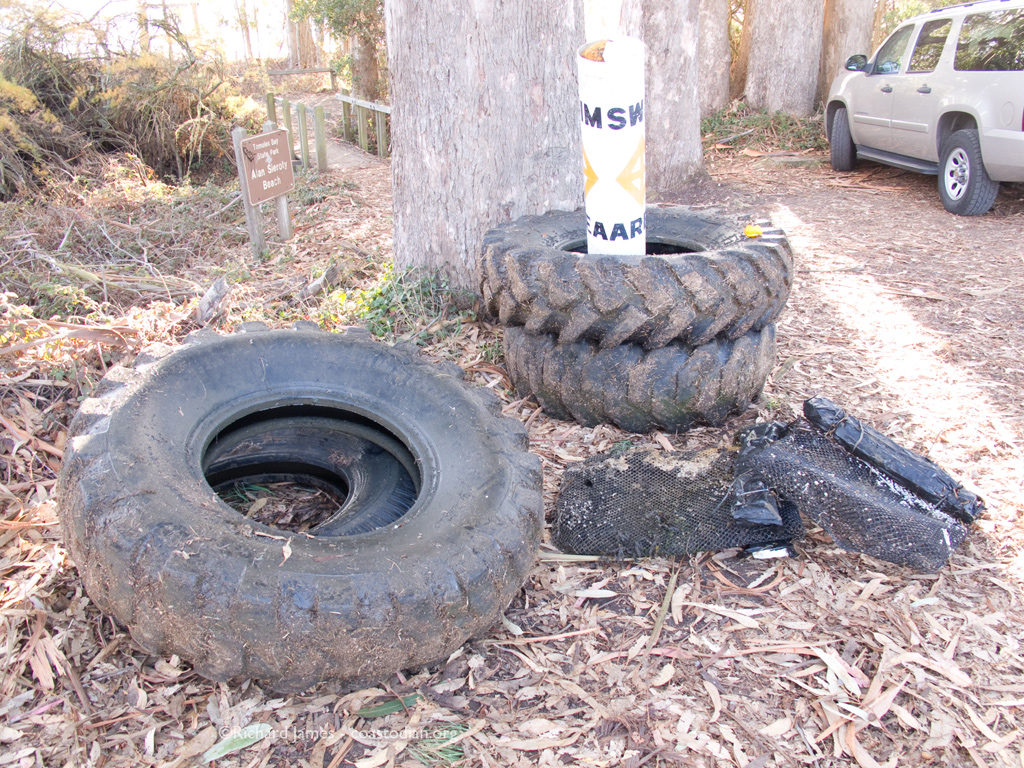 A few days later I paid a visit to Hog Island Oysters, having been invited to come talk about my clean-up efforts and the goals of Hog Island in terms of reducing the amount of plastic the oyster farms inject into the environment.

John Finger explained that in the past, a yearly cleanup had taken place to pick up oyster gear from around the bay.

Hog Island is committed to running a clean operation, reducing plastic loss and recovering as much as possible that is lost.

After seeing what I was digging out of the wrack on a regular basis, he decided that once a year was not enough. So he plans to work with the other growers to make a concerted effort four times per year. If I can, I’ll go out before the planned cleanup to see what is there to get, as well as to visit after the cleanup to see if the participants are actually recovering their gear.

I am going to reduce the number of “Save our Tomales Bay” reports for a while. A wait and see approach, if you will.

Let us hope that all the Tomales Bay Oyster growers step up and help manage the mess that their operations are creating, hopefully figuring out how to prevent the mess in the first place.

I’ll still be out there picking up stuff and photographing it.

In the meantime, enjoy this green heron I drifted by on christmas day. 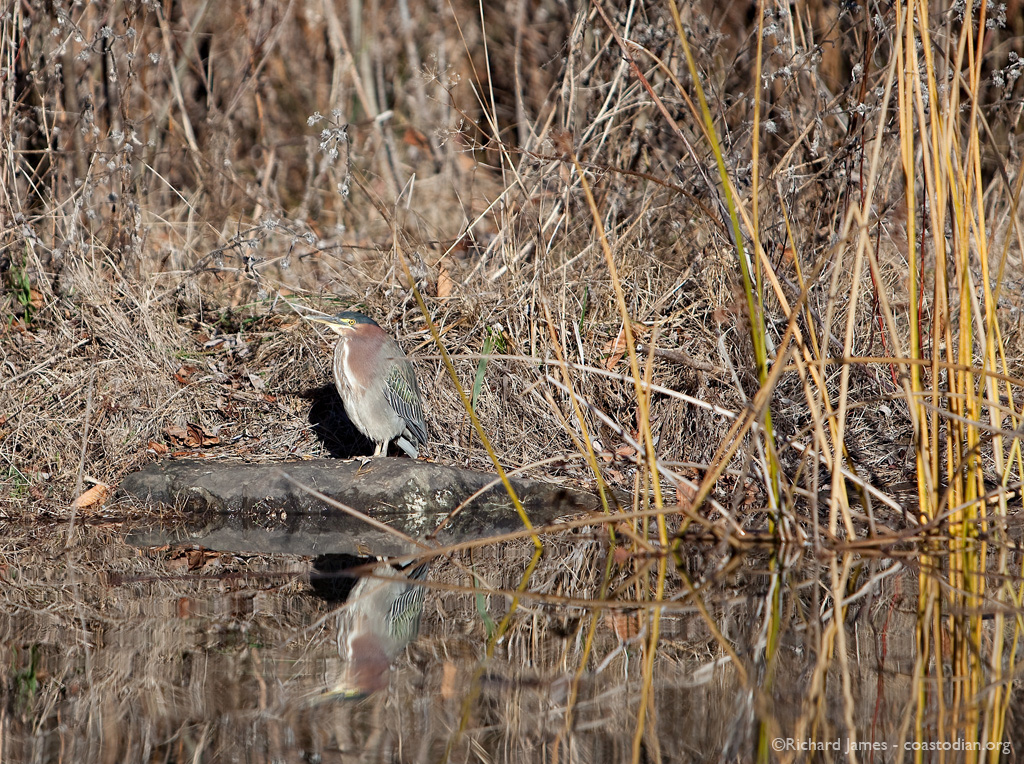 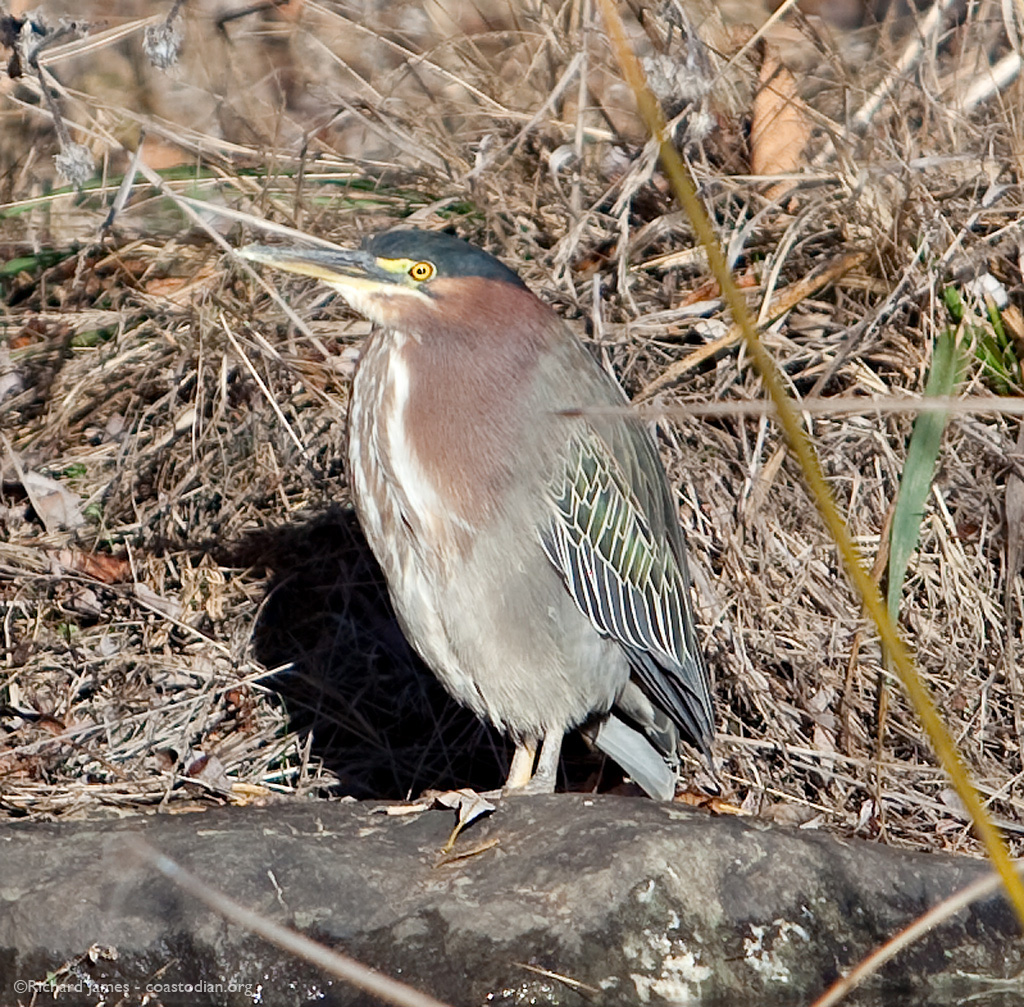 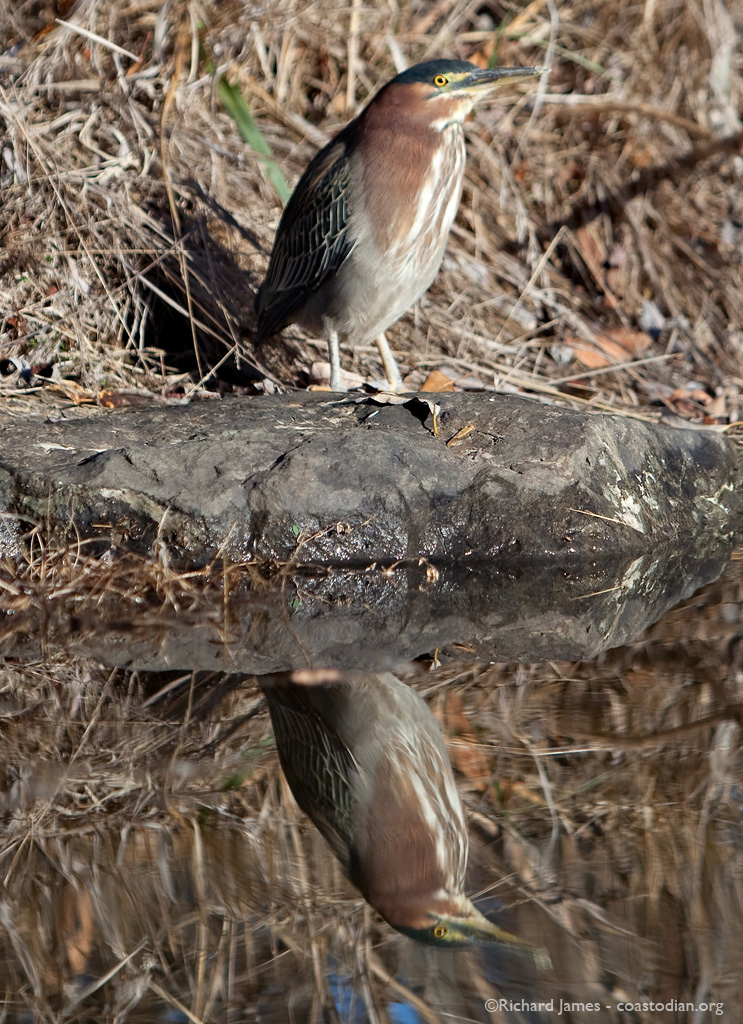 Now this is what I expect to see in a Bay as gorgeous as Tomales!

Coming soon, we’ll pay a visit to Drakes Estero to see what a “sustainable oyster operation” looks like under the surface.